Aztecs drop home opener to No. 4 Stanford in extra time 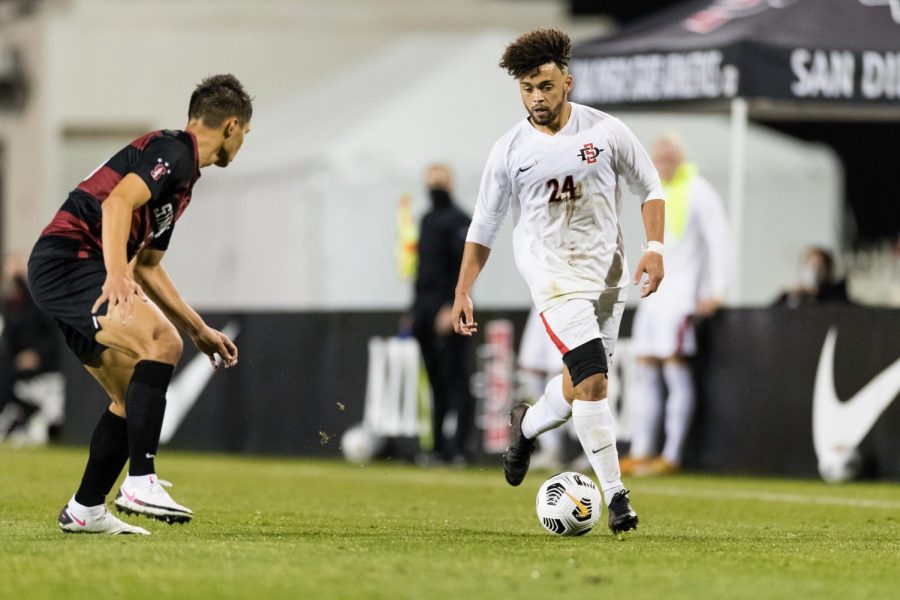 San Diego State men’s soccer gave No. 4 Stanford a run for its money during SDSU’s home opener Saturday night at the SDSU Sports Deck. The Aztecs (0-1-1 Pac-12 Conference) ultimately fell 1-0 during the first half of extra time.

The talk coming into this game was how the Aztecs would fare against an undefeated top-ranked team who has outscored its opponents 12-1 throughout its first three matches.

The Aztecs held Stanford (4-0-0, Pac-12) to zero shots in the first half, and it wasn’t until the 48th minute that the Cardinal got their first shot. Throughout the entire game, the Aztecs limited the Cardinal to only manage three shots on goal.

The Aztecs’ defense pushed the game to extra time for their second consecutive game. Just 36 seconds into the first 10-minute half of extra time, Stanford senior forward Charlie Wehan generated momentum by driving down into Aztec territory near the top of the penalty box. He was able to connect with sophomore forward Gabe Segal on the right, who shot past the near post off his right foot to win the game.

“It was a little bit of a heartbreak,” head coach Ryan Hopkins said after the game. “I told the guys after the game that the path towards success is often not straight. There’s going to be windy roads, there’s going to be bumps in the roads and I told them we’re going to face adversity along the way and that’s certainly what we faced in the first two games. These are painful growing lessons.”

The Aztecs came out with an aggressive mindset from the moment the match started. They matched the intensity of Stanford and played at a fast pace to continually move the ball up Stanford’s half of the pitch.

Sophomore forward Hunter George set the pace to show the Cardinal that the Aztecs were very much in the game. George had the Aztecs’ first shot of the night in the ninth minute.

The Aztecs led in shots in the first half with four shots and had four corner kicks compared to Stanford’s two.

Junior midfielder Laukoa Santos, sophomore midfielder Blake Bowen, freshman midfielder Iñigo Villaldea and senior forward Tevenn Roux were among some of the other Aztecs who took a shot at Stanford goalkeeper Kyle Orciuch.

In addition to managing several looks, the Aztecs’ defense played aggressively and fought to keep Stanford out of their zone. They played tight defensively clearing shots before they drove too far into the Aztecs’ goal box.

Sophomore defender Kyle Colonna said his team knew the type of overpowering energy Stanford would bring, so they focused on coming in with a strong mindset and remaining confident. He felt the energy the Aztecs brought was key to coming out strong in the first half.

“I definitely think the energy that the guys brought on the field as well as the whole team really helped us to keep their offense at bay as well as to give us a few opportunities to hopefully capitalize on,” Colonna said. “Unfortunately we didn’t but I thought it was a very good first half, keeping them to zero shots.”

Going into the second half, it was a matter of if the Aztecs could continue matching Stanford’s intensity for another 45 minutes. It seemed as if the Aztecs’ foot was coming off of the gas during the second half. Stanford played more aggressively and took more possession of the ball, helping the Cardinal lead the final 45 minutes of regulation in shots 9-2.

The Aztecs had two shots in the first six minutes of the second half, then didn’t get any other looks the rest of the game. In the meantime, Stanford struck the Aztecs with their attack and managed eight shots.

“You’ve got to knock out the champ when you get them on the ropes… you have to give that killer blow,” Hopkins said. “We kind of let Stanford off the hook in the second half this weekend. You know these are good teams, everyone in the Pac-12 has a good team, so when you have teams on the ropes you have to capitalize it. I think that’s something we’ll really focus on over the next week as we build in for Washington.”

Despite losing the game in overtime, the Aztecs know they’ll get a second chance at facing all of their opponents as they play each team twice this season. Hopkins felt there were still positives to take away by going down to the wire against a top-ranked team.

“I just think that togetherness and the fight,” Hopkins said. “We didn’t get to play as much football which you’re probably not going to always do against a Stanford team but I thought our defensive identity of our culture and our ball recoveries in their half I think we’re fantastic.”

Another positive was the aggressive performance from sophomore forward Austin Wehner. Wehner played 63 minutes and managed one shot. He’s a key member of the frontline attack that was aggressive to get past Stanford defenders.

“Austin has come such a long way,” Hopkins said. He works so hard, takes care of his body, and just brings a real tenacity against a team like Stanford that you need. For me, the best compliment I can give him is that he would be a Stanford type of player — a guy that has an elite mentality, has a work rate that’s unquestioned and he just brings so much for us.”

The Aztecs will take these positives as they go back to practice and look forward to next week’s road game at the University of Washington.

Colonna views the game as a learning lesson, and one of the biggest lessons is to not dwell on the game but remember that they’ll visit each other for a second time.

“The nice thing is in the Pac-12 we get to play teams twice, so we move on to the next game,” Colonna said. “We’re gonna have another tough game, very similar game at (University of Washington) and I think that we need to come up with a result.”

Colonna knows that this team is young and still learning under the new leadership of coach Hopkins. He’s happy with everyone’s effort and looks forward to continuing to move in the right direction.

“I think for how new and how young our team is, with Coach Hopkins as well as a lot of the new guys that have come in, you can see that we’re very well put together and we’re gonna keep learning and moving forward in the right direction,” Colonna said. “I was very happy with the performance and it’s unfortunate to give up a goal so early in overtime, but we’re just going to keep moving forward as we get to Washington.”

Up next, the Aztecs will take on the Huskies on the road at the University of Washington on Saturday, March 6 at 6 p.m. The game will be broadcasted on the Pac-12 live stream.