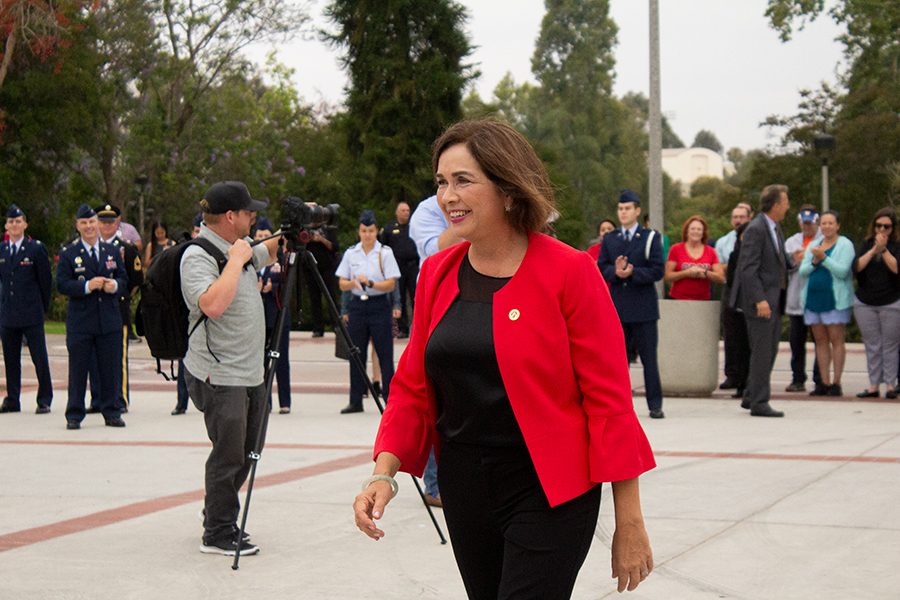 Every three years the president of a California State University is required to have their triennial review. This year it is President of San Diego State, Adela de la Torre’s turn.

Students, faculty and staff may submit their comments in letter form to the CSU Chancellor Joseph I. Castro about de la Torre’s performance.

“After the Board of Trustees has received and discussed a triennial review, the chancellor will prepare a brief report to the campus community,” CSU spokesperson Hazel Kelly said in an email. “The report concludes the review process and informs the campus community of major findings and any goals for the president and the campus.”

Kelly said, students who wish to submit their comments must send in their signed letter to the Chancellor by March 22. Letters will be confidential and petitions will not be accepted.

According to the CSU documented guidelines, “As is the policy of the board, a number of officers of the university and the chairs of its major constituencies, the Academic Senate, the Alumni Association, the Associated Students, and the University Advisory Board are being contacted for their comments with respect to specific criteria, which are cited below. A sampling of faculty, administrators/managers, staff, and community is also being invited to submit individual comments.”

Those who submit letter to the Chancellor can address concerns under the umbrella of general administrative effectiveness including management of human, fiscal and physical resources, working relations with the system and the campus, educational leadership and effectiveness, community relations, major achievements of the campus and the president, and personal characteristics.

SDSU has not sent out any emails informing the students of this process so far.

Third year history major Sean Stouffer said he found out of the review from a Reddit post.

“Personally, I think they should have at least left it somewhere in kind of plain view, they kind of hid it away, because the students have the right to know these things,” Stouffer said. “At the same time of course I do get why they did that considering the general consensus of feelings amongst students right now.”

“She could have done worse but she sure as hell could have done better,” Stouffer said. “I think she is just kind of disconnected from the general feeling of the students. She may or may not mean well I don’t know what she thinks personally but I’ll give her the benefit of the doubt. She probably means well in her actions. But she doesn’t seem to really have an ear out for the feeling of the general student populations.”

Interdisciplinary studies major and leadership minor second year Sophia Koch said she found out about the review through social media. She also said she would send in a letter.

“I would end up sending a letter in just because I think the student voices need to be more heard on campus and it’s not right now,” Koch said. “So just having the opportunity to have our voices go to a higher up and be reviewed by them is something that is very important and we should be taking advantage of.”

Koch said de la Torre had a good start at SDSU but is struggling now.

“Personally, I believe she came out of the gates pretty strong and was delivering on what she had promised to do and then as COVID hit and a bunch of different problems continued to surface on campus I believe she has been struggling,” Koch said. “I believe that any person in this position would be struggling.”

“This entire situation (COVID-19) has been draining on everyone and it is showing in our government in the school,” Koch said. “And I feel like they (SDSU Senate) should be the role models for all of us but we are kind of lacking on that front.”

Stouffer said he does not plan to send in a letter himself.

“I would rather leave the people who actually have something to say more room like not flood the system with things that would kind of defeat the purpose of students voicing their opinion,” Stouffer said.

SDSU community members wishing to send a letter can submit it via email to presidentreview@calstate.edu by March 22.