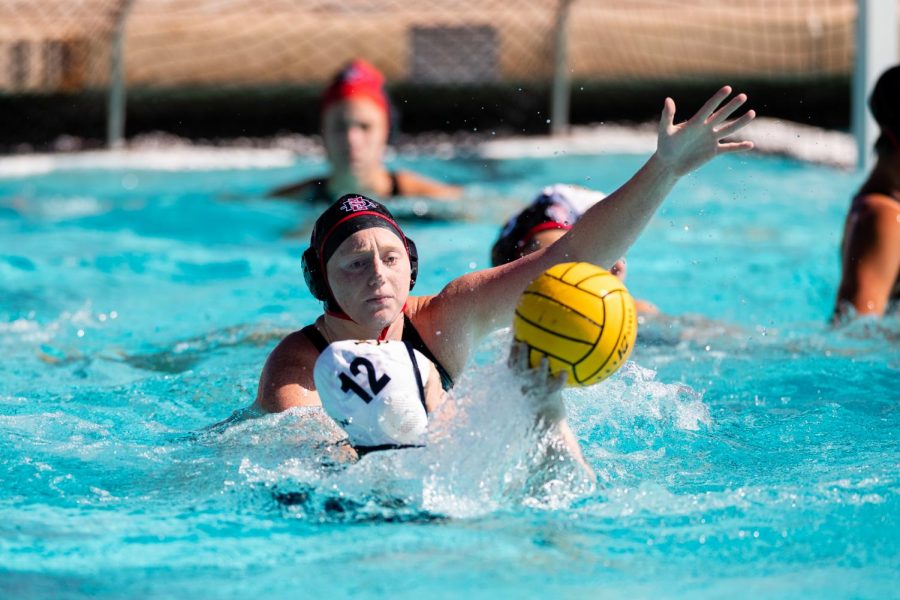 After starting its season with eight straight losses, San Diego State water polo hopes to rise to victory this weekend against Michigan at the Aztec Aquaplex.

After dropping its first eight games to No. 6 Arizona State, No. 10 UC San Diego, No. 4 UC Irvine and No. 9 UC Santa Barbara, the team has had quite the journey making its way back to action.

Senior driver and team captain Karli Canale, who leads the team with 24 goals in the first eight games, said she felt emotional when the team returned to action.

“As a team we were a little nervous, and I was personally very nervous,” Canale said. “After being out for over a year and with the pandemic happening it was definitely a shock to be back in the water.”

This offseason was different from previous ones in that some student-athletes had challenges staying in shape outside of the pool. The Aztecs entered the new year in phases, initially not allowed to even have contact with the ball in the water.

Canale said the pandemic has presented challenges, unlike anything she’s ever experienced before as a water polo player.

“Most of us haven’t taken this long of a break in our entire career in playing this sport,” Canale said. “I’ve been playing since I was 10 years old, and now I’m almost 22.”

Despite finally being able to compete in 2021, the team has still had a tough time adjusting to game protocol during the COVID-19 pandemic. Head coach Carin Crawford said the COVID-related adversity has affected the team’s performances this season.

“Right now, it feels like two steps forward, one step back, just because there’s a lot of safety protocols,” Crawford said. “For example, if somebody doesn’t feel well and they live with five other players on the team, then all these players are out. It’s the right thing to do and it’s the safe thing to do, but it just means there’s just a lot of lack of continuity.”

The Aztecs have had struggles in the water for the first part of their season as well.

Although the Scarlet and Black are on a skid to begin 2021, the team’s most recent losses came in a doubleheader against UC Santa Barbara on Feb. 27. SDSU lost by just one goal each in the team’s first Golden Coast Conference games.

Senior utility Emily Bennett, who leads the Aztecs with 19 steals, said she wants the team to give it their all entering conference play.

“I think our current mentality is to play hard and get after it,” Bennett said. “I only have a few games left in my career and so I’m going to play them with my whole heart. We’re looking forward to having those same opportunities as last year, and now a second chance to get the rings that we rightfully deserve.”

Ultimately, Crawford wants to find and hold onto that continuity so the team works together as one unit.

“Our goal is to just keep working for continuity in our practices and once we get all of our players working together for a solid week, I think we will be ready for GCC play when we hit the middle of March.”

The team will host Michigan on March 6 and 7 before returning to GCC action to play on the road against Santa Clara on March 12, University of the Pacific on March 13 and Stanford on March 14.

Crawford said Pacific, Fresno State (March 20) and Loyola Marymount (March 27) are among the GCC teams the Aztecs are keying-in on during the conference portion of the schedule.

“The nonconference, tough schedule that we’ve put together is really to prepare us for GCC play,” Crawford said. “And so our goal is to keep coming together as a team, hopefully, get all the pieces of the puzzle together in the pool at the same time.”