Column: Lamont Butler has a bright future ahead at SDSU 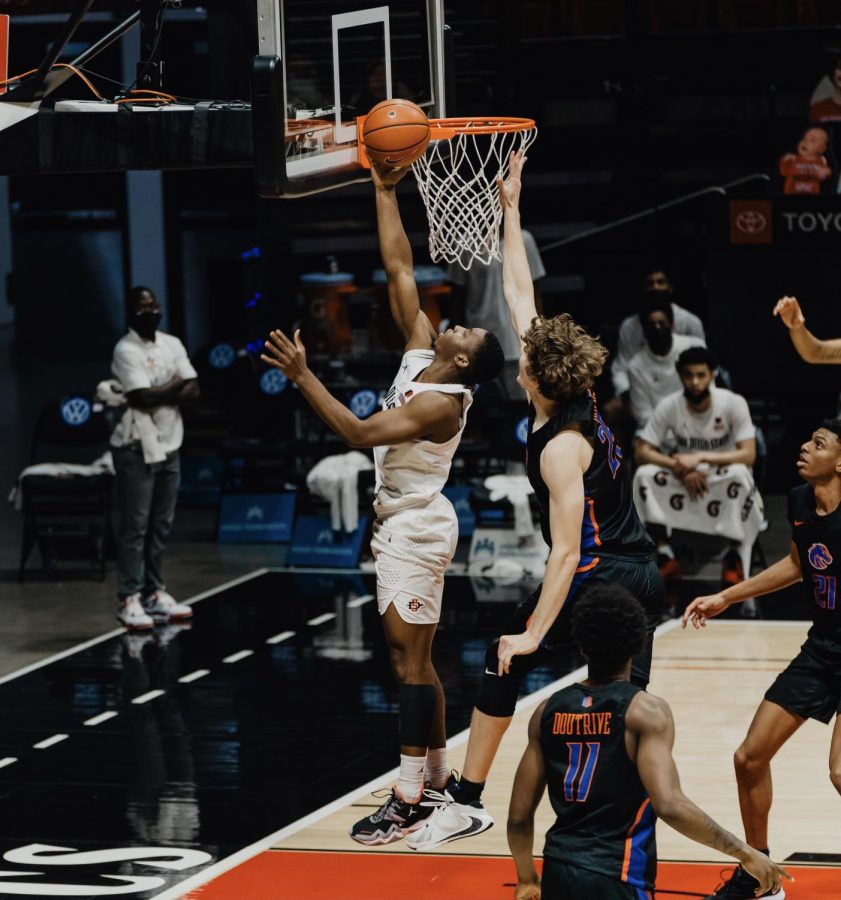 Add in graduate transfer forward Joshua Tomaić, and head coach Brian Dutcher is looking at five players he may need to replace in his lineup next season.

Despite the NCAA voting in October to grant an extra year of eligibility to all winter athletes, the opportunity to play professional basketball may prove too alluring for some of those seniors. Mitchell has already said he is “on track to play my last (three regular season) games as we speak today in the present.”

One senior has made his intentions clear. The plans of the other four remain unknown. One way or another, minutes will be up for grabs next season.

At the start of the season, Butler showed flashes of potential but averaged only seven minutes and 1.8 points in the first twelve games.

The cameo appearances were upgraded to a starring role, as a knee injury to Mitchell and an offense desperate for a spark thrust the freshman into the limelight against Utah State on Jan. 16.

Instead of faltering in the light, Butler basked in it. In a losing effort, Butler played 25 minutes off the bench and impressed with thirteen points and five steals.

It was thanks to him that the Aztecs nearly tied the game in the final minutes. Facing the 7-foot-tall Neemias Queta, Butler sliced through the lane, deked the Aggies’ junior forward with a pump fake, scored on a layup and subsequently drew Queta’s fifth foul of the night.

The performance earned him starts in both matches against Air Force and an increase in minutes. More minutes has led to an uptick in production as, in the past 11 games, he has averaged 16 minutes on the court with 7.1 points per game.

While the upside is clear, Butler still has other aspects of his game to work on – most notably his turnovers. On Jan. 22, his first start of the season, he had seven points, five assists, four rebounds… and six turnovers.

He filled up the stat sheet, yes. But at the same time, six turnovers from a point guard can be the difference between victory and defeat, something Dutcher realized.

“You can’t have a point guard with six turnovers, so as good as Lamont was, he has to be better,” Dutcher said in a post-match interview. “He knows that, we know that, so we’ll watch the tape and see what kind of student he is.”

His self-awareness reflects his maturity and willingness to grow, evidenced by his words after a 13-point performance against Wyoming.

“I know my game and I know I can help this team win,” Butler said. “I played a lot in high school so it’s just a game of basketball.”