Column: How the Aztecs continue to hold home court without fans 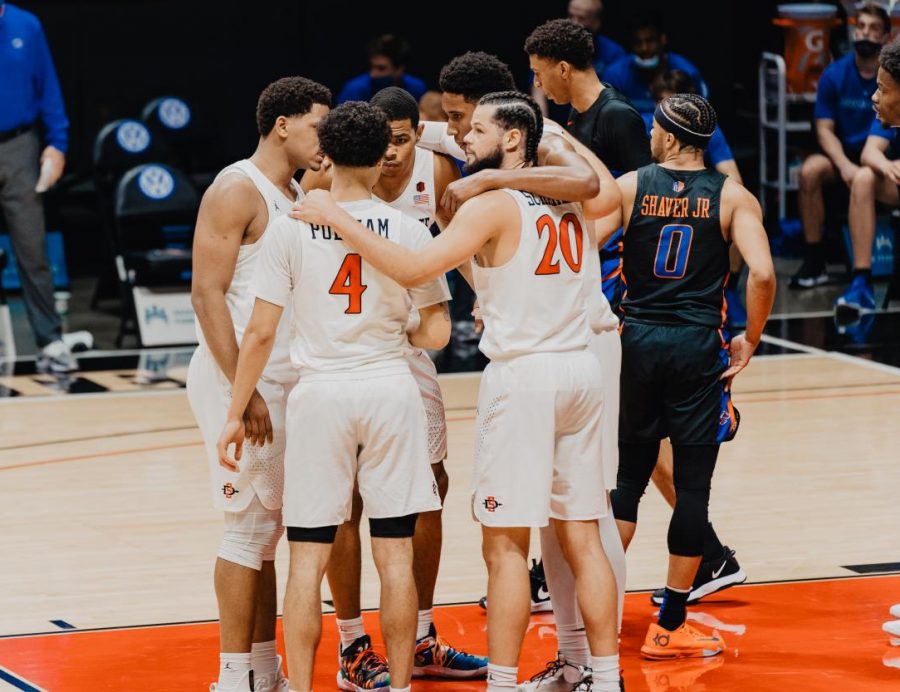 San Diego State men’s basketball players huddle together after a foul during the Aztecs' 78-66 overtime win over Boise State on Feb. 25, 2021 at Viejas Arena.

In years past when No. 19/21 San Diego State men’s basketball was competing for Mountain West Conference Championships, there were sold out crowds of 12,414 inside Viejas Arena and The Show – the student section – was in full force cheering on the Aztecs.

The pandemic changed that this season.

No crowds and no The Show.

The team’s energy had to come from within and not from fans piling into Viejas Arena.

Head coach Brian Dutcher said to only have one loss at home during conference play this season is a testament to the players with or without fans.

“It’s a credit to our kids,” Dutcher said. “There’s still the advantage of sleeping in your own bed, being comfortable in your environment. Obviously, it’s an advantage when the fans are in there because then you bring that dynamic to it. But, we’re always hard to play in Viejas and we’ve proven that we can play in there well without fans.”

It’s one thing to be dominant at home for one season, but the Scarlet and Black have done it for years.

Since the beginning of the 2016-17 season, the Aztecs have 54 wins in Viejas Arena and it has been consistent.

In addition, the last time SDSU did not record at least 10 wins at home in a season was all the way back during the 2004-05 season.

Dutcher said the continuation of sold out crowds would have carried into this season, especially after last year’s team, which went 30-2 overall and 14-1 at Viejas Arena.

“I think it would have been hard to get a ticket again,” Dutcher said. “We’ve been sold out for years and you put a team that’s 19-4 out there, we’re gonna get the support we’ve always gotten and then some. And then piggybacked on the 30-2 year, these last few years of Aztec basketball, have been really (magical).”

Senior guard Jordan Schakel said the team was able to win 90% of its home conference games through its energy, especially after losing back-to-back games in Logan, Utah in the middle of January.

“Yeah, Viejas was still good to us,” Schakel said. (I’m) happy to be playing at home, we still feel like we have a home court advantage no other teams in this conference have. They have altitude. We don’t have that, we rely on the fans, so to go 9-1, that’s good to hear. I think we really locked in after those Utah State games.

When the Aztecs squared up against Boise State last weekend, not only were they faced with no crowds, but they had to play against MWC Preseason Player of the Year Derrick Alston Jr.

The two teams were projected to finish atop the conference and it was only fitting that the Aztecs and Broncos would square off to determine the best team in the MWC.

Both games were close with the Aztecs taking both games — the first going into overtime and the second ending in single digits.

Schakel, who scored a team-high 17 points last Saturday against Boise State, said he imagined what the past two home games would have been like with fans and potentially, two more sold out crowds.

“I talked about it to a couple guys,” Schakel said. “I think everyone heard me talk like I was joking around saying, ‘you guys gonna let fans in today?’ But I think we all wanted to see what would happen.

“Me personally, just because there’s a lot on the line and our fan support no matter what, but just having a conference title on the line, and to be able to play for that in Viejas is something that I have experienced. And so I was looking forward to definitely let my imagination go wild in my head for that one.”

Dutcher said he can’t wait for another sold out crowd to watch a game inside Viejas Arena, hopefully for the 2021-22 season.

“With that being said, let’s try to get all the fans in the building next year,” Dutcher said.