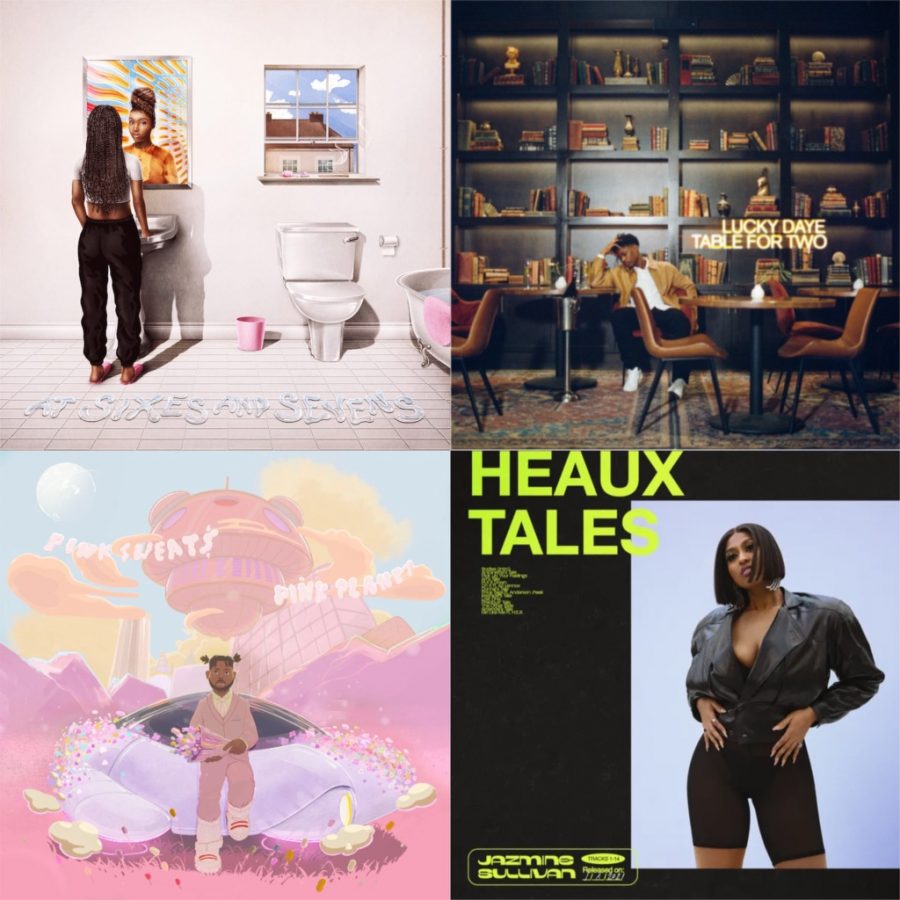 So far in 2021, music releases have been slow and steady.

Electronic, rap and alternative artists have had a few worthwhile showings, but many of these bigger projects are suited for a later year drop. R&B artists have been carrying more than their fair share of weight in the first two months, and these releases have come from an even mix of established musicians and young singers destined for a huge year.

Inspired by the impressive showing of today’s R&B, here are the best projects of the bunch to check out from the year’s first sixty days:

Philadelphia-born and raised singer Pink Sweat$ is an easy artist to love and nearly impossible to hate. The 27-year-old crooner released his debut studio album “PINK PLANET” on Feb. 12, a wonderfully joyful project marked with breezy tunes and positive vibes.

Sweat$ has earned himself a reputation as an earnest and romantic songwriter as well as someone who excels at making cozy feel-good music. Most of his songs make it hard to resist reminiscing about high school sweethearts or feel like your huddling up around a campfire. On top of that, Sweat$’s music has this adorable quality of sugar and spice that’s just so … nice.

Sweat$ mellow voice is suited admirably for gentle acoustic production, which sets the soothing tone of “PINK PLANET.” Throughout the album, he craves “paradise” and proves he’s not afraid to give away his heart and profess his love.

His musings begin calmly with “PINK CITY,” a track where Sweat$ recalls his tough childhood from an uplifting angle. Lines like “Born in the rubble” and “raised in the mud” indicate he’s come from the bottom of the earth and rose up resiliently to make something of himself. To top it off, Sweat$’s glossy voice is supported by angelic choir vocals that evoke his devout origins. There has never been a time in human history when a choir has made a song worse, and that streak indeed continues on “PINK CITY.”

The irresistible excitement of “PINK CITY” ascends into “Heaven” as Sweat$ belts high notes and declares life “feels like heaven when I’m with you.” This dreamy and romantic guitar ballad incorporates a dazzling harp section and makes way for a blissful start to the project.

After a long run of majestic solos, the song which earns him a spot as one of R&B’s most exciting talents is “Chains,” the album’s most essential track, as well as its softest. If the sentiment of “nice guys finish last” is true, obviously nobody told Pink Sweat$ because he left his innocent bleeding heart on the studio floor when he made this song. His poignant pleas are forthright and genuine, illustrating him as a cuddly nice guy putting everything on the line.

Six of the album’s eighteen tracks come from Sweat$’ 2020 EP “The Prelude, including “Icy,” “Not Alright,” and “Give It To Me.” But the most notable inclusion is “At My Worst,” a cute bubblegum pop song where Sweat$ wishes for a partner who’ll love him for all his faults. The album also includes a bonus track version of “At My Worst” with Oakland-bred Kehlani, who adds her own glittering aura to the track.

There’s no question Sweat$ made his mark with this sweet, comforting release to blare with your roof down while zooming through a tunnel – or whatever teens do nowadays in coming-of-age movies.

Also released on Feb. 12, R&B virtuoso Lucky Daye’s multifaceted EP “Table For Two” consists of six duets with a diverse allotment of talented R&B singers. The entire project takes place inside of a futuristic speed dating circuit where Daye converses with revolving tables of women, each with their own separate plot.

Daye had a long rise to stardom, beginning his journey as a contestant on Season 4 of American Idol. Over a decade later, he received Grammy nominations for his candid debut album “Painted” and collaborated with R&B legend Babyface.

His follow-up to “Painted” is grounded in technology and Daye’s visually inspired storylines are accompanied by electronic onomatopoeia, namely animatronic voices and text message sound effects. This somewhat daring concept would likely be lost on a lot of artists but Daye and his all-star team of female vocalists create something totally invigorating.

Beginning with a robotic voice memo that reminds audiences to pass through their “ego check” at the front door, Daye portrays the role of alluring ladies’ man faced with the daunting task of finding “the one.” He gets to play out his desired fantasies but must confront future discretions depending on the path he takes.

Things start tense with “How Much Can A Heart Take,” a heated discussion at the table with YEBBA, where both sides accuse each other of infidelity and neglect over a bouncy electro-R&B beat. Both singers can reach deep to construct a toxic scenario accurately.

The fallout of this song leads into “On Read” featuring Tiana Major9, and sees Daye attempt to get his sweetheart’s attention back, but she’s not even replying.

Next, there’s “My Window” with Mahalia, and they portray a troubled couple on a collision course towards a bittersweet goodbye. They seem to fight about the most trivial things, including the weather, giving direct reference to Ann Peebles’ “I Can’t Stand the Rain,” famously used by Missy Elliot and Timbaland.

On the intoxicating “Access Denied,” Daye enlists the ethereal Ari Lennox to create the project’s most complimentary song. The duo’s voices play off each other throughout the track, matching each other’s pitch and emotion to a tee over rhythmic drums courtesy of Curtis Mayfield’s “Give Me Your Love.”

Daye’s immaculate guest list continues with the gorgeous and colorful “Dream” featuring Queen Najia and consisting of a lovey-dovey fantasy sequence where Daye realizes he’s found his soulmate. Though he’s aware that he’s living in a dream-like state of allure, Daye hopes this honeymoon stage will last forever.

Daye’s affectionate sextet finishes with “Falling In Love,” as Daye falls back into a soulful reality opposite the enchanting Joyce Wrice. This track sums up the album’s theme of love in the unknown loss as Wrice provides the album’s most rewarding guest appearance, and Daye’s longtime producer D’Mile provides the perfect foundation to conclude with.

On “Table For Two,” Daye shoots 7/7 (including a brief intro) and finishes with an excellent compilation to satisfy anyone who’s ever experienced a tinge of romance.

Beginning the year with a bang, Jazmine Sullivan released her fourth studio album, “Heaux Tales,” on Jan. 8, her first project since 2015’s “Reality Show.” As someone known for taking extended breaks between albums, it’s no surprise she returned with another classic.

Sullivan’s music encompasses the vast beauty and range of R&B, often making extremely personal revelations and displaying decades of musical influence. “Heaux Tales” is easily the most contemporary-sounding album of hers but is just as socially relevant as her previous work.

In a recent interview with Revolt TV, Sullivan attributed her album to the evolving public perception of women today.

“Heaux Tales is about my observation of today’s women standing in their power and owning who they are — No longer is male patriarchy dictating what it means to be a ‘good girl,’” she said.

There’s a total of fourteen tracks, six of which are intimate spoken-word vignettes interspersed between the other eight revelatory autobiographical tracks. Each of the stories expressed in the interludes by Sullivan’s friends matches the subjects of the tracks that follow.

After a harmonizing intro and a brief interlude, Sullivan’s escapades commence on “Pick Up Your Feelings,” a motivational serenade showing she has absolute freedom over her life. Sullivan is self-assured and flawless throughout the song, letting her actions speak for herself.

Sullivan exudes sexual confidence on “Put It Down,” promising “I’ll pay his rent if he’s nasty,” and follows immediately with the passionately steamy song “On It” featuring Ari Lennox. These frisky anthems are littered with sexual innuendo and sensual callbacks to provocative ‘90’s R&B artists. I’ll let you guess for yourself what the “it” in both these songs refers to.

Besides her partnership with Lennox, Sullivan has a pair of other intriguing collaborations. There’s “Girl Like Me” featuring H.E.R. where the ladies display insatiable chemistry while bashing inconsiderate men and “Price Tags,” a super catchy confidence-booster with Anderson .Paak.

But Sullivan’s most exceptional moment is on the absolutely gripping “Lost One,” a stripped-down recollection of an agonizing breakup’s fallout. Creating a distraught depiction of heartbreak filled with self-deprecation and relatability, Sullivan’s aching ballad will leave listeners hoping nobody ever has to endure an earth-shattering crisis like this.

“Heaux Tales” is an adventurous listen built on the relatable stories of countless women, depicting a restorative cycle of love, loss, and growth that’ll touch anyone who hears it.

Other Projects Worth Checking Out: