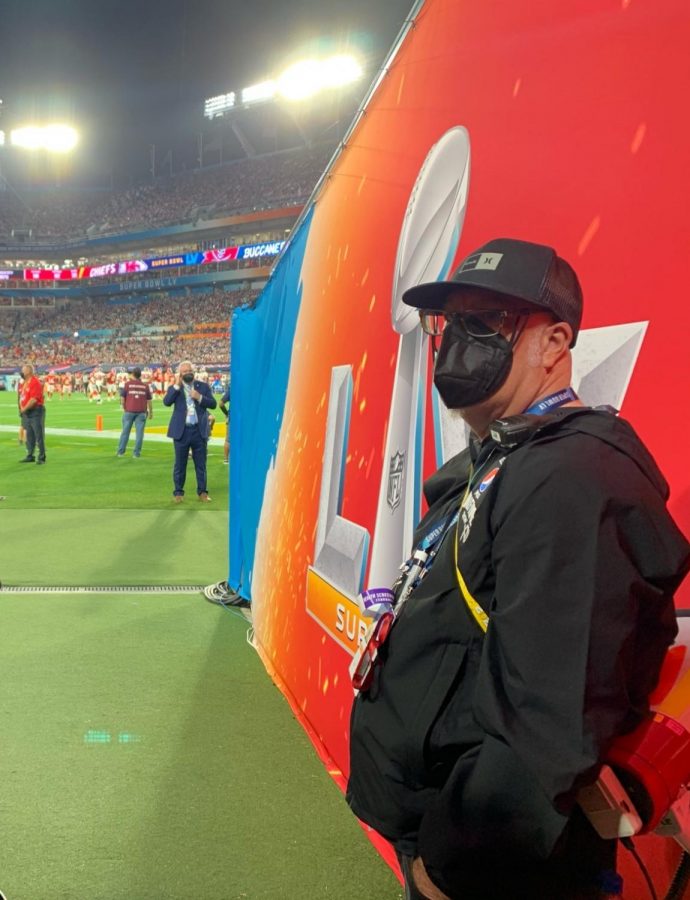 Music has always been a part of Bryan Ransom’s life. When he was in high school, he had a really good band director and thought he could see himself pursuing that as a career.

He received his Bachelor of Arts in Music with an emphasis in percussion and received his Professional Teaching Credential from San Diego State.

While he was directing the pep band as a student teacher at Poway High School, the director of bands, Mark Davis, at the time was the entertainment coordinator for the San Diego Chargers.

He asked Ransom for help on game days and when Davis left, Ransom got hired to fill the position for the organization.

Ransom worked there for 25 years until the Chargers left San Diego in 2017 and moved to Los Angeles.

After a women’s basketball game, Ransom was sitting in his office and got a call.

“I got a call around 9 p.m., 9:30. I thought who is calling me this late,” Ransom said, reflecting on the phone call that got him the job.

It was Joe Zenas who was a staging supervisor of the halftime show. He asked Ransom if he would like to interview to be a part of that year’s halftime show production team.

Ransom said he wasn’t sure what to expect but had time to invest and it sounded intriguing. A few weeks later, Zenas and Ransom met, and Ransom started working on it soon after.

“We met once and hit it off,” Zenas said. “I was very confident in his abilities.”

Zenas tried to bring Ransom back for the Super Bowls after, but there was not enough money allocated in the budget. However, for the 2003 Super Bowl, he was brought back and has been with them ever since.

“He is a really good organizer and can reach a lot of volunteer pools,” Zenas said.

One of the reasons Zenas says Ransom has been “very effective and has done the job incredibly well” is his ability to build relationships with people.

“I owe Joe a debt of gratitude,” Ransom said.

Even though the Super Bowl is at the beginning of February, the prep work starts months in advance.

Ransom recruits people to produce the show in the host city. He finds stage pushers and other positions, bringing on more people than necessary because not everyone shows up.

About 600 to 800 people produce the halftime show in a “usual year,” as Ransom said.

However, this year obviously was anything but usual. Because of the pandemic, there were only about 70 people involved.

It was the regular touring team, so everyone knew each other and could be trusted to follow local and NFL safety protocols, Ransom said.

The production team had their COVID-19 unit where everyone got tested in the morning and got the results at night, making it easy to contract trace and get ahead of a potential outbreak if one were to occur.

Luckily, no one got the virus.

In a non-pandemic year, one to two weeks before the game, rehearsals start.

Ransom and his team practice moving the equipment through the tunnels at the stadium and setting up and taking down the stage.

The first time they build the stage, it takes about one and a half hours. Slowly, they decrease the time it takes to set up. Ransom said they do that about three to four times.

Afterall, they only have about six to eight minutes to set it up on the day of the big game.

On performance day, he checks people in, walks around and makes sure people are doing what they are supposed to be doing.

At Tampa Bay’s Raymond James Stadium, the stage was built on a large platform next to the pirate ship. Construction began about a month before the game, according to Ransom.

Ransom also helped out during the performance. He positioned five lighting carts and three stair unit carts which provided access to the field for The Weeknd and the dancers.

During the actual performance, Ransom is ensuring that everyone is where they need to be. By the time the artist is performing, he has seen and heard it many times. But he does like to live in the moment.

“I consciously allow myself to enjoy the energy and the emotion of the moment,” Ransom said. “It’s live TV after all. Anything can happen. And it’s not just live TV, but historically the most-watched live event around the world. It’s a pretty cool thing to be a small part of.”

Ransom has done 20 Super Bowls. The halftime show that sticks out the most to him is when Prince performed at the Super Bowl in 2007.

“So many things could have gone wrong, but it ended up going smoothly,” Ransom said. “I watch the video four to five times a year and get chills constantly remembering how great the day was.”

The NFL even did a short documentary-style video of Prince’s halftime performance.

Ransom’s favorite part of working at the Super Bowl every year is reconnecting with people. His least favorite part is being away from his family.

He is gone three weeks at a time.

Although it is easier on him now, when he first started, it was hard to be away that long because his daughter was young and he missed his family.

During those three weeks he is gone, he misses the first two weeks of the Spring semester. While working on the Super Bowl, he finds substitutes to fill in for his SDSU duties.

“I am very lucky SDSU has been supportive of me,” Ransom said.

Even though this year’s production had significantly fewer people, Ransom says he doesn’t think this will carry on in the future.

Given it is safe to be in large groups this time next year, he thinks there will be even more people than normal involved to make the show happen.