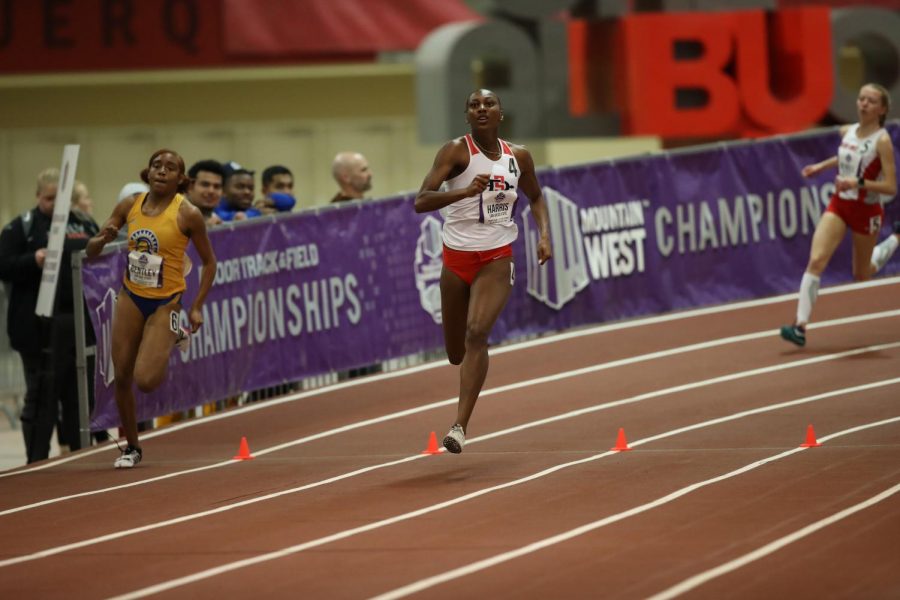 The San Diego State track and field team was triumphant in its first competition of the 2021 outdoor season with a 109-60 win over the University of Utah in a dual meet held on Feb. 25 at the Aztrack Sports Deck.

The Scarlet and Black had a winner in 14 of the 17 events (Utah did not have a competitor in the pole vault, discus, or high jump).

The Aztecs took first and second in the 100-meter hurdles with junior Danae Dyer finishing in 13.87 and senior Asia Smith in 14.40. In the 400m hurdles, the Aztecs had three of the top four finishers, with senior Maya Brosch taking first with a 1:02.05 finish.

“I’m super happy to be competing,” Borsch said of her return to competition. “It’s been over a year-and-a-half since I’ve ran. Glad to finally be back at it.”

Junior Carina Clark was the third-place finisher in the 400m hurdles. She ran a personal record of 1:04.87.

“Last season got taken away from her, but she came back and ran an over two second PR in the 400 hurdles,” Borsch said of Clark’s performance. “I think it’s really great that she didn’t let COVID-19 slow her down at all.”

Senior Jalyn Harris was part of the dominant 4x400m performance and led the Aztecs group of 200m runners with a 24.42 time. The Aztecs swept the podium claiming first, second and third in the 200m event.

The Aztecs’ group of throwers are coached by a new face this season: SDSU alumni Jasmine Burrell.

“Having a new coach who believes in you and is willing to push you has provided us with a new mindset and new perspective on throwing,” Grotegeer said of Burrell. “During the pandemic, it hasn’t been easy for all of us, but it’s nice having a coach that inspires us and pushes us to do the best that you can do every practice.”

Grotegeer said she’s grateful for the opportunity to compete given the circumstances.

“I think we’re extremely blessed to be here and to compete,” said Grotegeer. “It was great to be back and I think we’re all really happy to be back.”

Due to COVID-19 protocols, spectators will not be allowed at meets for the foreseeable future. Without fans, the Scarlet and Black have had to rely on each other to help find that energy usually provided by the crowd.

“We have to support each other. Otherwise, it’s not going to be as fun of an experience and I think we all understand and recognize that,” Borsch said. “I’m going to cheer on my girls because I would want them to do the same for me. I think that definitely is a team dynamic and also we’re all mutually recognizing the situation and looking out for each other.”

The Aztecs’ season continues when they host the Aztec Invitational from March 25 to 27 at home at the Aztrack Sports Deck.