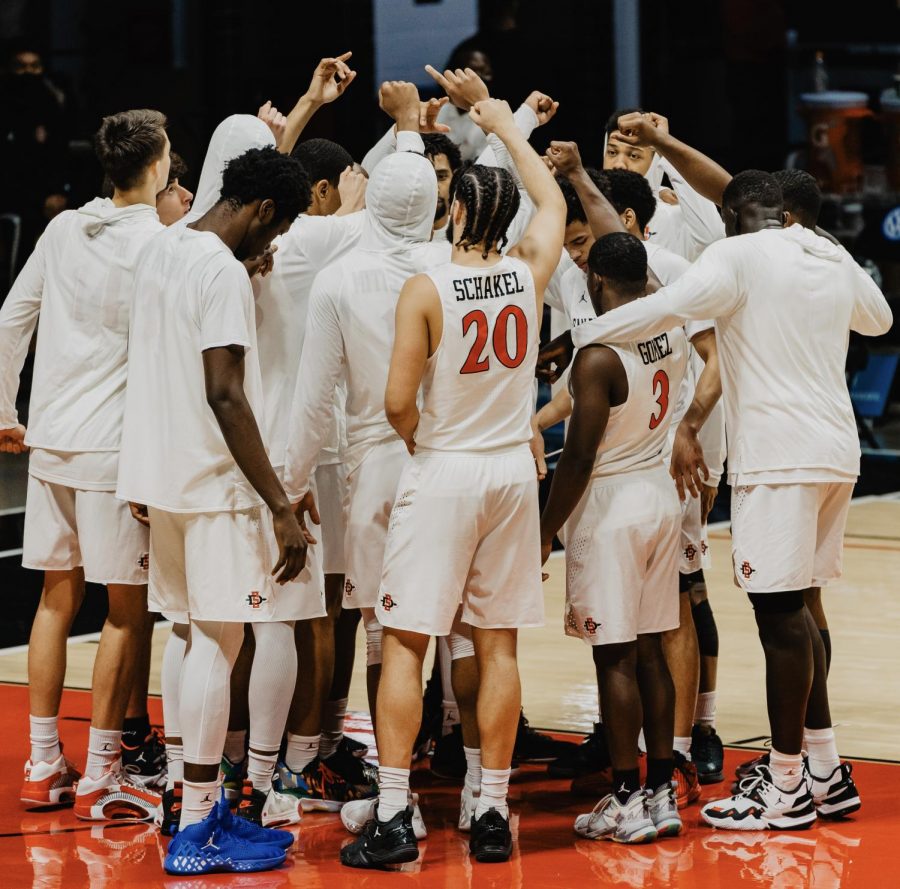 The San Diego State men's basketball team huddles together before the Aztecs' 78-66 overtime win over Boise State on Feb. 25, 2021 at Viejas Arena.

At no point in the previous 100 years has the program accomplished what it did on Wednesday night.

Head coach Brian Dutcher took pride in how his team was able to win the title given the challenges with the COVID-19 pandemic.

“What this team accomplished this season was special because of the circumstances we had to do it in,” Dutcher said.

The season began for SDSU with practices featuring one coach, one player and contact was to be avoided as much as possible.

Despite the adversity, the Aztecs still made it to Wednesday’s game against UNLV with a chance to win it all, and thanks to a now-11th straight victory, they were able to do just that.

Here are three observations from the win.

Early in the second half, senior forward Matt Mitchell hit the first of two free throws to put the Aztecs up 45-32.

The shot gave him 15 points on the night, but those points had meaning far beyond this game.

It put Mitchell at sixth place in the all-time Aztec scoring list with 1,404 points.

Over the course of his SDSU career, Mitchell feels there’s one main aspect of his game that’s helped get him to this point: his in-game speed.

“My pace, my pace and control on the offensive end have really grown,” Mitchell said.

As a freshman, Mitchell said it took some time for him to get used to the game speed at the college level, but things have changed as he’s played more games.

“I came to college and things sped up for me my first year,” Mitchell said. “I was able to slow down and gain control of the game.”

On Wednesday, Mitchell showed off some of that control, leading SDSU in scoring against UNLV with 19 points.

Throughout his career with the Aztecs, players and coaches have noticed one major improvement in Mitchell’s overall game: his ability to make a play.

That ability is something Dutcher thinks will continue to improve for years to come.

“It’s just his playmaking that continues to grow,” Dutcher said. “Like any player the more he plays, the more comfortable he is in every different situation he finds himself … he’ll have a really good pro career in my opinion.”

Senior guard Jordan Schakel felt the same way, explaining that he’s seen Mitchell’s talent from the beginning of their time together.

“I think his playmaking has improved, (assists), making the right play at the right time, he’s always been poised, he’s been a solid player since day one,” Schakel said.

Following a five-game stretch in which he had scored less than 10 points per contest, junior center Nathan Mensah snapped the streak with a 14 point performance against the Rebels.

It was Mensah’s ninth game scoring in double figures this year, and in addition to his buckets, he also grabbed six rebounds and blocked a shot.

Dutcher said that against UNLV, his team was able to take advantage of some of the mismatches that the Rebels put on Mensah.

“Nathan’s just opportunistic,” Dutcher said. “We found him on a couple rolls for dunks, we hit him in the low post a couple of times when they had smaller defenders on him and we just took advantage of the matchups.”

One of the reasons Mensah found scoring success on Wednesday was because of his ability to get to the foul line and convert his free throws.

Mensah was a perfect 6-for-6 from the charity stripe. Mitchell said that was because of Mensah’s willingness to attack the basket.

“I feel like he was a little bit more aggressive, more assertive on the offensive end,” Mensah said. “Nate’s a good player. I don’t think there’s any specific reason for him not scoring above double digits in the last five games.”

Schakel was also among those who noticed Mensah’s efforts, and he says that the pick and roll combo with him and senior guard Trey Pulliam was another reason Mensah was able to get to the basket.

“They were hedging Trey’s pick and rolls early in the game and left (Mensah) open for the roll, so he was a beneficiary of some of Trey’s passes,” Schakel said.

Pulliam had eight assists on the night, with three of them leading to Mensah buckets.

After the game, Dutcher talked about some of the back issues that Schakel had been dealing with over the past two days.

“We didn’t know if we’d have Jordan at all tonight, he didn’t practice for two days. As of last night, I would say he was doubtful,” Dutcher said.

Thanks to some help from associate athletic trainer Sergio Ibarra, Schakel was able to play in Wednesday’s game.

He certainly looked like his usual, healthy self, scoring 16 points on 5-for-8 shooting, including 4-for-6 from beyond the arc.

Schakel said that he’s not quite sure what caused the pain, but that it emerged on him.

“It just hurt on Monday,” Schakel said. “I don’t really know how, just kind of started flaring up.”

In addition to his scoring on Wednesday, Schakel also put up nine rebounds, eight coming from the defensive end.

His status will be something to monitor over the next week as SDSU prepares to play in the conference tournament.

Schakel is the Aztecs’ leading scorer on the year with 346 points (14.4 points per game).

Dutcher said he will use the next week off to get him back to normal before returning to the Thomas and Mack Center for the tournament.

“He gutted it out he found a way on the floor and now we’ve got to get him some rest, continue to rehab and get him healthy for the Mountain West tournament and the NCAA tournament,” Dutcher said.

The Aztecs will head back to Las Vegas on Thursday, March 11 to take on the winner of Wyoming and San José State in the quarterfinal of the Mountain West tournament.