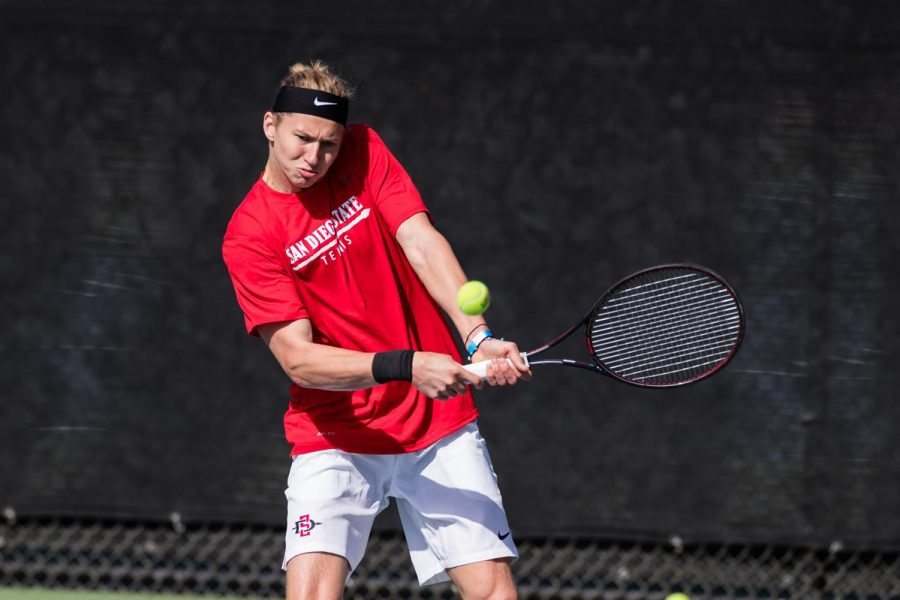 After a COVID-19-induced, 14-day hiatus shut down all team-related activities, the San Diego State men’s tennis team resumed match play this past weekend. The Scarlet and Black swept a Feb. 26 doubleheader against UC San Diego but dropped a match to UC Irvine on Feb. 28.

All three matches were played at the Aztec Tennis Center.

The Aztecs began their doubleheader against the Tritons on the right foot, defeating them 4-2 for their first victory of the season.

Moving to singles, SDSU freshman Roni Rikkonen took the first victory of the morning session, as he met little resistance against fellow freshman Eric Silberman in a 6-0, 6-2 win.

Traxler, who played for the Aztecs during the 2019-2020 season, gave Seeman a run for his money on the first court. However, Seeman ultimately triumphed over the former Aztec 7-5, 1-6, 6-4.

After defeating Lan on the doubles side, Blair did it again on singles, winning a tight-knit 6-4, 7-6 (7-5) match to secure the win for the Aztecs.

While UCSD was able to avoid a shutout in the morning session, SDSU blanked its opponents in the second match 5-0.

With the consecutive victories, the Aztecs are now 11-0 all-time against the Tritons.

After being unable to finish their match in the morning session, the team of SDSU graduate senior Rafael Gonzales Almazan and senior Ignacio Martinez took care of business in the afternoon session, beating Ermet and Silberman 6-1.

Both Aztec freshmen continued to impress, as Blair and Rikonnen won their matches over Silberman and sophomore Frasier Leslie by scores of 6-2, 7-5 and 6-1, 6-2.

Seeman dealt Duong a similar fate as the Aztec sophomore handed the Triton senior a 7-5, 6-1 defeat.

Castro’s 6-4, 6-4 victory over Taylor, followed by the aforementioned win from Blair, served as the coup de grâce for SDSU.

The Aztecs were unable to carry the momentum into their third and final match of the weekend, as they were shut out by the UC Irvine Anteaters 4-0.

The loss snapped a five-game winning streak against the Anteaters, but SDSU still holds a 15-7 career record against UCI.

Pollanen and Seeman were the first to fall in doubles, dropping their bout against UCI graduate senior Bjorn Hoffman and senior Bruce Man-Son-Hing 6-2.

Shortly after the first loss, Gonzales Almazan and Martinez were defeated by the Anteaters’ duo of junior Mark Peneff and freshman Thomas Smart by a similar 6-2 score.

The Scarlet and Black fared no better in singles play against a veteran UCI team, as sophomore Matthew Sah quickly dispatched Castro by a 6-3, 6-1 margin.

On the first court, Seeman and Hoffman had a mighty back-and-forth competition, but Hoffman wore out Seeman and won the point 7-6, (8-6), 6-2.

With its back against the wall, SDSU needed a victory to have a chance at staying alive. Its chance was snuffed out after junior Mark Mkrtchian defeated Blair on the fifth court 6-3, 6-4.

SDSU will be back in action on March 3 as they take on Loyola Marymount in a rescheduled match. The match will take place at the Aztec Tennis Center.