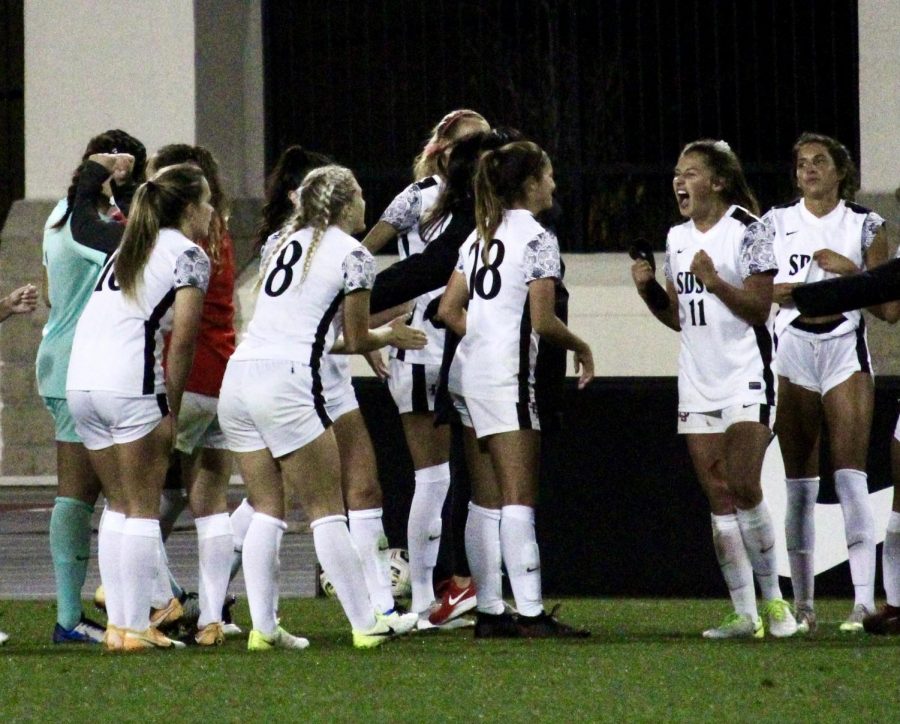 The San Diego State women's soccer team celebrates after its 3-2 win over Nevada on March 5, 2021 at the SDSU Sports Deck.

After transferring from the University of Oregon, San Diego State women’s soccer forward Claire Watkins was looking forward to finally getting the chance to play in front of friends and family this season.

It ended up not happening due to COVID-19 restrictions, but Watkins instead got the chance to play a big role in the season opener for the Scarlet and Black.

SDSU beat the Nevada Wolf Pack 3-2 on March 5 at the SDSU Sports Deck, thanks in part to a late goal by Watkins in the 87th minute of the game.

“What a great finish,” head coach Mike Friesen said of the game-winning goal. “She’s a great ball striker. (She got) in those areas where she can shoot from distance and has tons of power.”

The Aztecs played their first game in more than 17 months – more than 430 days to be exact. Friesen expected both teams to be rusty and make mistakes to start the game, and it happened.

“We did not play at all like we’ve been training, which is to be expected at some level,” he said.

The 14th-year coach on the Mesa has used the words “dynamic” and “explosive” to describe his team’s playing style, and no more was that evident than at the beginning of the game.

Despite not scoring a goal through 43 minutes in the first period, the Aztecs had 12 shots on goal to just four by Nevada.

The main reason for the lack of scoring was Wolf Pack junior goalkeeper Kendall Stovall, who was able to save seven shots during the game.

Friesen also said he felt the reason for the lack of success on shots was due to the game becoming ‘stretched’ out.

“We had those opportunities to run with the ball, which we did, but then (Nevada) was condensing the middle of the field,” he said. “So we’re having to shoot from distance, but we want to get into the penalty box to create those goal-scoring chances.”

They were finally able to convert on one of those chances in the 44th minute, when senior midfielder Chloe Frisch ran inside the box for her first goal of the season, giving the Aztecs a 1-0 lead heading into halftime.

In the second half, SDSU stretched the lead to 2-0 thanks to a goal by senior forward Phoebe Leitch, who ran inside a tight space between two Wolf Pack defenders for the score.

Even though the Aztecs had a two-goal lead, Nevada came back in the game, thanks to two goals by Hannah Souza in the 62nd minute and 72’ mark.

When the game was tied, senior forward Malia Kaleohi was heard on the field saying, “We got a lot of time.”

The Aztecs had just enough on the clock to let Watkins squeeze in one final goal to seal the win.

“I don’t know if there’s anybody that can handle her (Frisch) first few steps (with the ball),” Friesen said of Frisch’s ability to get into attacking positions. “Once she has you on the ball and she has you isolated, you’re in trouble.”

Freshman goalkeeper Alexa Madueno took the starting nod behind the net for the Aztecs, replacing last year’s MW Defensive Player of the Year Brooke Lisowski. Madueno ended up having three saves in the game, with two in the first period.

Up next for the Aztecs – a home game against Mountain West preseason co-champion Boise State in just 48 hours.

Similar to the men’s basketball schedule format, SDSU plays two games in a span of 48 hours, however with one crucial difference – it’s against another opponent.

“I watched Boise State play against UNLV (on Friday) and I thought they look the same as us, where they’re just off,” Friesen said. “I think both teams will probably be better on Sunday.

“For us, it’s just going to be about staying connected, moving the ball quickly and then creating better opportunities to have balls inside the penalty box, looking for those chances as opposed to just settling for things from outside.”

Kickoff against the Broncos starts at 12 p.m. Sunday afternoon at the SDSU Sports Deck.