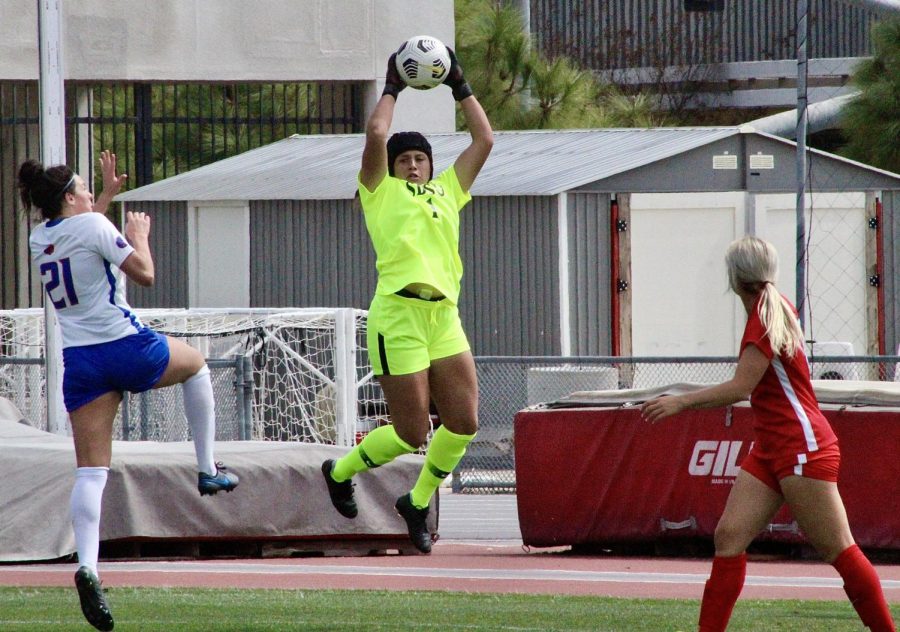 When San Diego State women’s soccer goalkeeper Brooke Lisowski graduated this past season, head coach Mike Friesen had to figure out who would fill the void left by then-Mountain West Conference Defensive Player of the Year.

Through two games, he may have already found Lisowski’s replacement.

In a matchup of MWC preseason co-favorites, SDSU beat the Boise State Broncos 3-1 on March 7 at SDSU Sports Deck, thanks in part to four first-half saves by freshman goalkeeper Alexa Madueno.

“Once I got the first shot, my confidence went up and up,” Madueno said of her performance. “As (shots) were just coming to me I knew I could stop it, and I trained for this moment, so I knew I could cover on everything.”

Sunday afternoon’s match was the first time both teams met since the 2019 MWC Championship game, when the Broncos beat the Aztecs 2-0. Friesen expected the game to be physical due to Boise State’s playing style, and it showed in the number of fouls.

The Broncos had 13 for the game, compared to eight fouls by SDSU.

“We knew that coming in, that they’d be super physical with us,” Friesen said. “That’s part of how (Boise State) wants to play. They do things to knock you off just a little bit to control possession. We told our team, ‘You’ve got to bring it too.’”

Even though SDSU’s philosophy is to be dynamic and explosive on offense, the Broncos backline prevented a lot of opportunities to score at the start.

Despite having 25 shots in their game against Nevada, the Aztecs were held to just 17 shots against Boise State with only six during the first period.

Why the low shooting numbers? Friesen credits the Broncos’ game plan of denying open spaces on defense. By closing in on those gaps, it limits the opponent’s ability to create offense, which can then be used to form counter-attacks.

Friesen said Nevada has a similar playing style to Boise State — something SDSU was prepared for after the Aztecs defeated the Wolf Pack Friday night.

“One thing that Boise and Nevada did similarly is to be able to drop and take the space behind them away,” Friesen said.

The Aztecs were able to jump out to a 1-0 lead late thanks to an own goal by Boise State – goalkeeper Sydney Smith went outside the box and was unable to secure the ball as it sailed over her head.

At the break, Friesen urged his team to continue pushing hard as one unit, and ultimately, those goal-scoring opportunities would happen.

“The talk at halftime was more about, ‘Hey, stay connected, play simple and move the ball, but you have to win balls physically,” he said. “We did a really good job late starting to get forward and get in the penalty box.”

In the second period, SDSU was able to finally get some breathing room when a Broncos foul in the box led to a penalty kick opportunity in the 66th minute.

Junior midfielder Laura Fuentes capitalized on the moment, scoring her first goal of the season to give the Aztecs a 2-0 advantage.

Boise State wouldn’t go away quietly, however. Two minutes later, Grace Pekovich was able to beat the Scarlet and Black’s defense to assist a goal for BSU freshman forward Mariah Albin, cutting the lead down to one at the 68-minute mark.

From there, SDSU was able to connect on one more opportunity in the 76th minute, when senior midfielder Chloe Frisch found sophomore defender Jessica Sanders along the wing for the score, giving the Aztecs a 3-1 lead with 14 minutes left.

“It felt so good,” Sanders said of the goal. “I was about to cry because that was my first college goal too, so I was really excited and happy.”

For the coaches and players, this victory against last year’s conference champions was one that many were looking forward to. The win over Boise State gives the Aztecs sole possession of first place in the conference’s West Division.

“I think it’s massive,” Friesen said. “To get two (wins) on this weekend, we got a little bit of cushion. We have a huge (slate of games) next weekend on the road that we’re going to have to go get.

Up next, SDSU will head up north for a road game against the San Jose State Spartans. The kickoff is at 7 p.m.