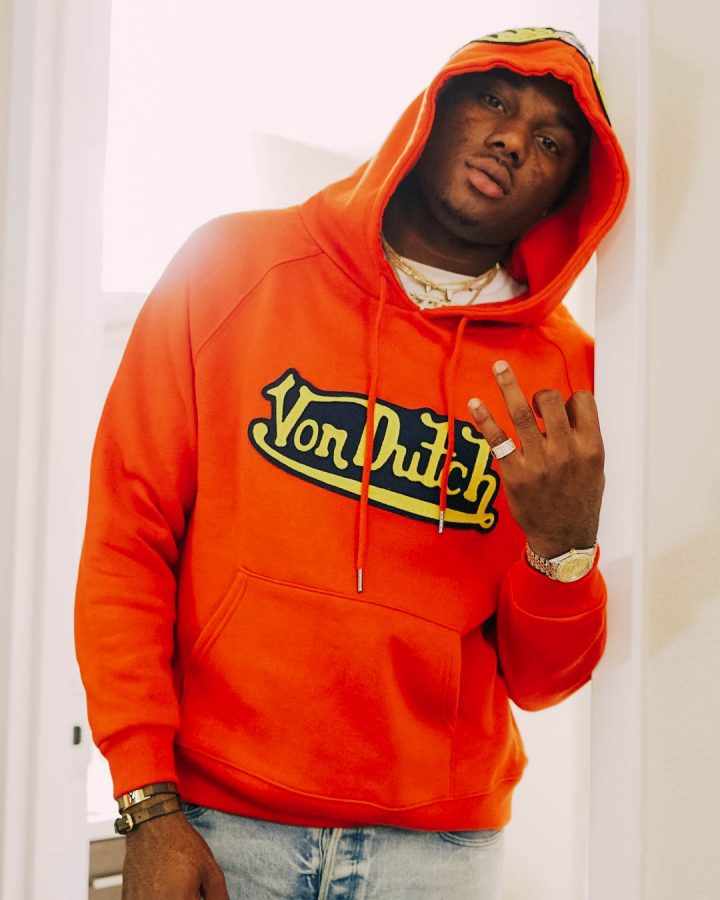 Rapper Kalan.FrFr was a defensive back for San Diego State football from 2013-2016.

It’s time to add another name to the list of famous former students at San Diego State University.

Formerly an SDSU football defensive back, Kalan Montgomery first suited up for the Aztecs in 2013 before departing from the team in 2016. After leaving football, Montgomery’s focus took a sharp 180 as he fully shifted towards a career in music. Though he had been pursuing music while he was still on the team, making songs full-time allowed him to grow into one of the region’s most prominent artists

The now 25-year old rapper established a leading presence in LA’s magnetic rap scene with a versatile bag of regional hits like “Hot N Ready Freestyle” and “Right Wit It” featuring G Perico and Chris O’Bannon and produced by fellow up-and-coming rapper Blxst. The hypnotic beat and commanding bars of “Right Wit It”  should be instantly recognizable to anyone living in or around the 213 or the 562.

Born and raised all around the city of Los Angeles including in Compton, Carson, and Gardenia, Montgomery played defensive back at Lakewood and Dominguez High Schools before heading to SDSU. After his football career was unexpectedly cut short, his passionate all-in mindset enabled him to pursue a music career; and its safe to say it’s paid off.

On March 1, Montgomery revealed he was taking his talents to Roc Nation, joining a stacked roster containing lots of well-known artists and spanning multiple genres including standout R&B singers like Rihanna, Snoh Aalegra to seasoned rappers Maxo Kream and Jay Electronica in their ranks. In a statement officially announcing his partnership with Jay-Z’s famed entertainment agency, Kalan.FrFr believes this just the first stepping stone on his way to even more success.

“Being with Roc Nation feels like we set our goals and now we’ve accomplished them. We’re just excited to take it to the next level. I just wanna prove to everyone that believes in me … I wanna prove them right,” Montgomery said.

Kalan.FrFr’s debut album “TwoFr 2” will arrive Friday, March 12, and be released on his new label. This project is the hotly anticipated sequel to his standout 2018 mixtape “TwoFr” which first put him on the map as a premier talent.

His breakthrough project gained a mythical status for its content along with the story behind its inception. According to an interview with legendary rap blog “Passion of the Weiss,” the entire mixtape ended up being recorded in a single night after Montgomery had a long fight with his girlfriend.

On “TwoFr,” Kalan.FrFr tapped into a sound with many similarities to other great regional artists like 1takejay and BlueBucksClan and showed the skillset of a much better, west coast version of A Boogie.

Songs on the mixtape like the evenly menacing and catchy “Star” paint a picture of a confident man while the bouncy “Thugga Baby” is where Montgomery shows off his impressive crooning chops. There’s also the laid-back stripper anthem “Atlanta” and “Naked,” a soothing serenade to any potential ladies. Followed by the equally impressive project “Leak The Tape,” Kalan.FrFr began to separate himself from the pack as an incredibly well-rounded artist.

On his upcoming full-length debut, the exciting tracklist includes veteran bay area Mozzy (“No Love”) and frequent DaBaby collaborator Stunna 4 Vegas (“Get In”). Both collaborations have been dropped ahead of the album’s release and are absolute must-listens.

However, one of his most extraordinary tunes is the playful new single “Scoring,” Packed with creative punchlines and his adaptive flow, Montgomery has witty lines like “Playin’ with that pussy like I’m Stevie on chords” that show his light-hearted side.

Kalan.FrFr is currently sitting at over 430,000 monthly listeners on Spotify, a total which is only bound to go up after the release of “Two Fr 2.” Expect to hear more about him in the near future, and don’t be surprised if you see pop up on an award show someday.