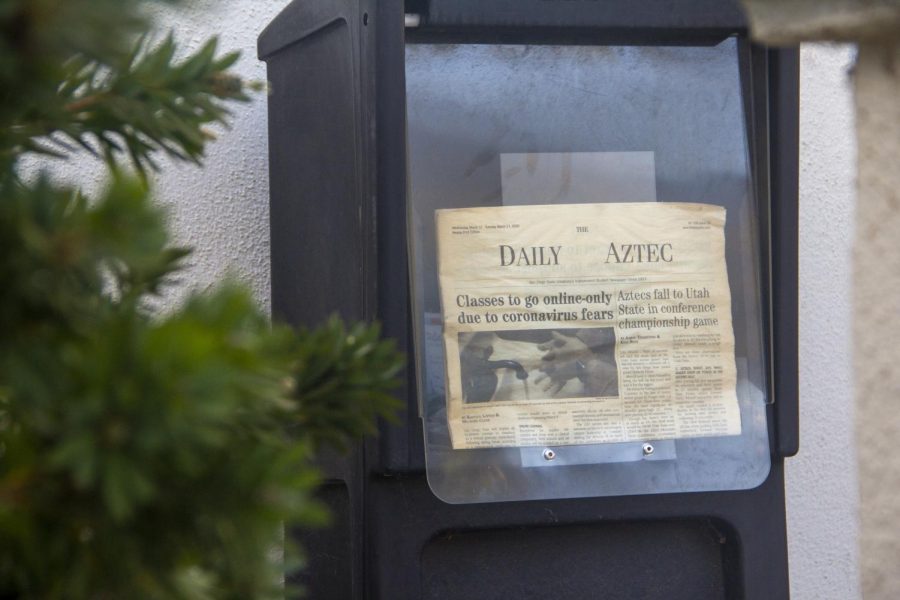 The March 11 print edition of The Daily Aztec – the last since the pandemic began – has sat in newsstands on an empty campus for a year. The yellow, sun-faded newsprint tells the story of a campus in transition as the headline reads, "Classes to go online only due to coronavirus fears."

On March 11, 2020, The Daily Aztec published its last print edition, although editors at the time did not know it. Days later, San Diego State announced that all classes would be moving online, notified on-campus residents they would only have 24 hours to move out and Gov. Gavin Newsom implemented a stay-at-home order.

At the same time, Men’s basketball had just finished up a historic regular-season and was preparing for the NCAA Tournament. Associated Students elections were on the horizon. Daily life took a quick turn as the dangers of the coronavirus became more clear. It’s been an unprecedented 365 days and here are the stories that defined them.
March 12, 2020 – SDSU to go online-only starting Friday, cancels most events until April 8
In a campus-wide email sent on March 12, SDSU announced that all in-person courses would move online starting the next day. This came after the College of Professional Studies and Fine Arts moved classes online on March 9 and accelerated the university’s original plan to move classes online after spring break. Two days earlier, an anonymous student started an online petition that gathered over 2,000 signatures in the first two days it was posted. At the time the petition was started, there were 164 COVID-19 cases in the United States and 45 in California.

To date, the U.S. has reported more than 29 million confirmed cases of the coronavirus, more than 3.6 million of which are in California.
March 12, 2020 – NCAA cancels tournament, school suspends spring sports
In light of growing concerns over the COVID-19 pandemic, the Mountain West Conference postponed and then canceled all spring sports, including baseball, softball, water polo, rowing, lacrosse, men’s and women’s tennis and men’s and women’s golf.

In addition to spring sports, the NCAA canceled the men’s and women’s basketball tournaments, which was especially devastating as the Aztecs had just wrapped up a historic season (30-2) and had been expected to make a deep tournament run.
March 20, 2020 – CA governor issues ‘stay at home’ order, SDSU to remain open
On March 19, California Gov. Gavin Newsom announced a mandatory stay-at-home order, requiring residents to stay at home or in their places of residence save for essential services. Campus remained open, and instruction was not affected, though at this point, all classes had transitioned to online.

Following the governor’s order, SDSU announced that it was postponing May commencement until December and would offer a virtual alternative.
April 28, 2020 – San Diego State reports $42 million in losses associated with pandemic
The pandemic devastated the economy and, along with it, SDSU’s budget. In April 2020, the university reported a $42 million loss, with refunds and fee reimbursements constituting the majority of the total.

In response to the unexpected fallout, the university implemented a hiring chill, paused all non-essential construction projects and tapped into funding reserves set aside for economic uncertainty.

SDSU received $29 million in federal relief funding from the Coronavirus Aid, Relief and Economic Security (CARES) Act. Half of this funding was disbursed to students.

Today, SDSU has begun to close a $67 million funding gap, using mostly one-time reserves and relying on higher than expected enrollment numbers. However, budgetary constraints are predicted in the long-run.
May 12, 2020 – BREAKING: San Diego State moves to mostly virtual instruction for fall 2020 semester
As SDSU students had just finished up the second half of the spring 2020 semester online, the university announced that it would continue with virtual instruction in the fall, following guidance from the CSU.

The plan, marketed as SDSU Flex, would offer flexibility for a select number of in-person labs and studio classes and reopen residence halls at 54% capacity.
July 15, 2020 – SDSU shares Ten Point Plan to advance racial justice
Following the murder of George Floyd at the hands of police, the nation entered into a summer of racial reckoning. In response, SDSU released a 10-point plan to address inequity and better support Black students, faculty, and staff.

Two weeks after the start of the semester, SDSU reported 64 new cases and paused in-person instruction for the 200 courses on campus for four weeks.
Sep. 6, 2020 – SDSU issues ‘stay at home’ order to on-campus residents
After reporting 120 new cases of COVID-19 on Sep. 4, SDSU implemented a mandatory stay-at-home order for on-campus students. The total number of cases associated with SDSU since Aug. 24 was 223.

The initial order was slated to last a week. However, the university extended it another week in light of the holiday weekend.

By Sep. 8, SDSU was reporting 400 confirmed positive cases, 75% of them among off-campus students.

On Sep. 15, the university announced that it would require all students living on campus to undergo weekly coronavirus testing as part of a new surveillance testing protocol. Confirmed cases associated with SDSU were at 676.

At the same time that SDSU was beginning to get a handle on the situation, San Diego County was at risk of returning to the more restrictive ‘purple tier’ in California’s reopening blueprint, with county officials placing much of the blame on the university.

By Sep. 30, the university surpassed 1,000 confirmed cases, making it the number one university or college in California in terms of coronavirus cases.
Sep. 23, 2020 – Joseph I. Castro chosen as next CSU Chancellor
Joseph I. Castro made history as the eighth chancellor of the California State University. Castro, who replaced former Chancellor Timothy P. White, became the first California native and first Mexican-American to lead the nation’s largest public university.

Castro, now entering his third month on the job, has said he is prioritizing increasing access to higher education.
Oct. 1, 2020 – San Diego State releases revised 2020 season schedule
After months of uncertainty surrounding the future of college football, the Mountain West Conference gave the go-ahead to start the season (only after they postponed the season and then changed their minds).

The Aztecs finished with a 4-4 record (4-2 in MWC play) and chose to withdraw from bowl consideration.
Nov. 4, 2020 – SDSU hosts super poll site at Viejas Arena
Like everything else this year, the general election was unprecedented. SDSU opened its doors to voters on Election Day and hosted a super poll site at Viejas Arena where people could register to vote,  come vote in-person or drop off their mail-in ballots.
Dec. 1, 2020 – SDSU eliminates Spring Break, adds “recovery days” despite massive student opposition
On Dec. 1, the University Senate voted 44 to 28 in favor of replacing the traditional spring break with spread out “rest and recovery days” meant to minimize the risk posed by students traveling and mitigate a potential surge in COVID-19 cases in the spring.

SDSU students were very unhappy with the decision. More than 600 students attended the virtual Senate meeting to express their opposition. The Senate voted twice on the measure after the first vote was interrupted by students unmuting their microphones, pleading with Senators to keep the break.

An online petition gathered 10,000 signatures within 24 hours of the decision and the Associated Students Board of Directors sent a letter to SDSU President Adela de la Torre asking her to consider reinstating the nine-day holiday in the interest of students’ mental health.
Jan. 20, 2021 – Joe Biden sworn in as 46th President, Kamala Harris makes history as first female, Black VP
A week after violent rioters – egged on by former President Trump and the Republican Party’sinflammatoryy rhetoric – stormed the Capitol, former Vice president Joe Biden was sworn in as the 46th President of the United States.

Alongside him was California Senator Kamala Harris, who became the first female and first Black vice president.

The same day, SDSU students logged on to the first day of spring 2021, embarking on their second mostly-online semester.
Feb. 2, 2021 – SDSU approved to begin administering COVID-19 vaccines starting next week
As the effort to vaccinate against COVID-19 ramped up, SDSU received 300 doses of the Moderna inoculation and began distributing it to eligible community members at Calpulli Center.

On Feb. 25, SDSU received an additional 300 doses just as San Diego County expanded vaccine eligibility, moving into Phase 1B Tier 1. Among the newly eligible individuals were all SDSU student employees, faculty and staff regardless of age.
March 5, 2021 – Plans for possible in-person commencement announced
Nearly a year after 2020 commencement was postponed, SDSU announced that it was planning an in-person option for 2020 and 2021 graduates in May. Pending final approval from county and state public health officials, the in-person ceremonies would take place the last weekend of May at a yet-announced outdoor venue with social distancing protocols enforced.

Should conditions worsen, the university has planned a drive-through option as a contingency. The university will provide a fully-virtual celebration for students not interested in attending the in-person ceremony or drive-through alternative.