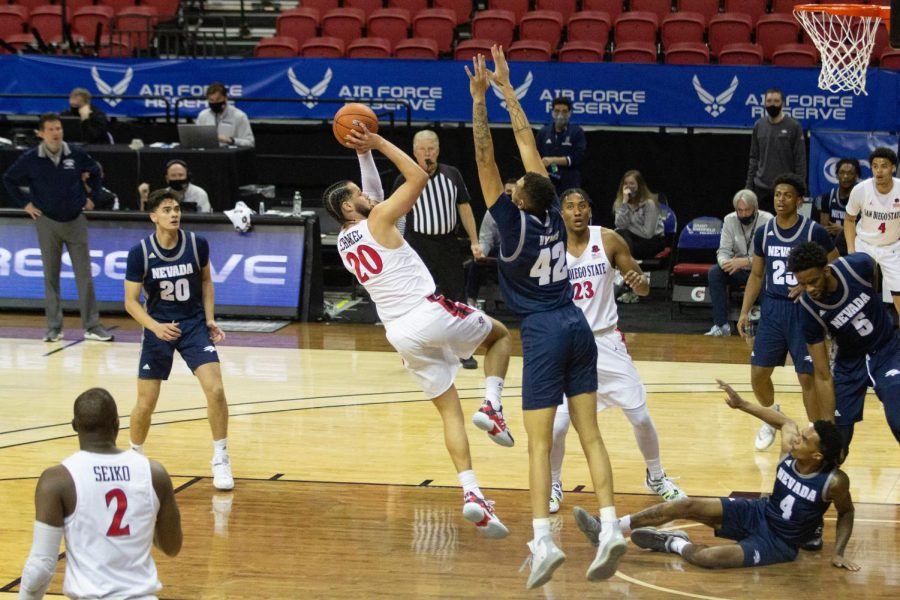 by Kyle Betz and Luis Lopez

After a first-half that featured 27 fouls between both teams, the Aztecs shot 45% from the field, including 43% from deep to lead the team to a double-digit win over the Wolf Pack.

Championship game appearances are what any program strives for, however, SDSU has had their fair share of issues with the game.

The team is 1-6 in its last seven championship game appearances.

The Aztecs get a chance to avenge their last two championship game losses — potentially against Utah State, who beat SDSU in the 2019 and 2020 tournament title games.

After shooting 1-for-7 during the first half, it seemed like Mitchell’s struggles from the field continued after shooting just 1-for-4 against Wyoming in the tournament quarterfinal game.

Not so fast, however.

The second half showed why Mitchell was named Mountain West Player of the Year.

The four-year starter exploded for 19 second-half points, shooting 6-for-15 from the field and knocking down three 3s in the process.

Mitchell said what sparked his second-half run was his aggressiveness.

Mitchell ended up with 20 points, eight rebounds and one assist to reach his fourth-straight conference tournament championship game.

In Wednesday’s game against Wyoming, SDSU needed strong scoring performances from its starters to get the win.

Instead of solely relying on the team’s typical leading scorers in Mitchell and Schakel (who scored his 1,000th-career point Friday night), the Aztecs got contributions from all over the roster.

Butler dropped 10 points along with two rebounds and two assists.

“We know they can put the ball in the basket, they can get stops on the defensive end,” Mitchell said of Pulliam and Butler. “It was all about just trying to instill confidence in them and so it seems it is paying off

Dutcher said his team can count on any player to make a scoring difference on any given night.

“Every night, it’s a different guy,” Dutcher said. “We had contributions from everybody and it can vary from game to game. We ride that hot hand when we find it.”

In a game that remained close from start to finish, an advantage in any category would prove valuable.

For SDSU on Friday, that advantage was in the turnover column.

Nevada turned the ball over 14 times, while SDSU only lost the ball nine times.

Those 14 turnovers led to 12 points — five of which came from fast breaks.

“The more points you can score with the floor broken the better chances you have of winning,” Dutcher said of the Aztecs’ fast-break attack. “I thought our fast break points were really important, especially in the first half.”

Although Nevada had 10 fewer shot attempts than the Aztecs during the first half, SDSU still kept a 37-32 lead entering the locker room. Each team ended up with 53 attempts, but the Aztecs cashed in on nine 3-pointers compared to Nevada’s five.

The Aztecs return to Thomas & Mack tomorrow to face the winner of the Colorado State-Utah State quarterfinal game at 3 p.m.

The Scarlet and Black advance to their 10th championship game in the last 12 years.