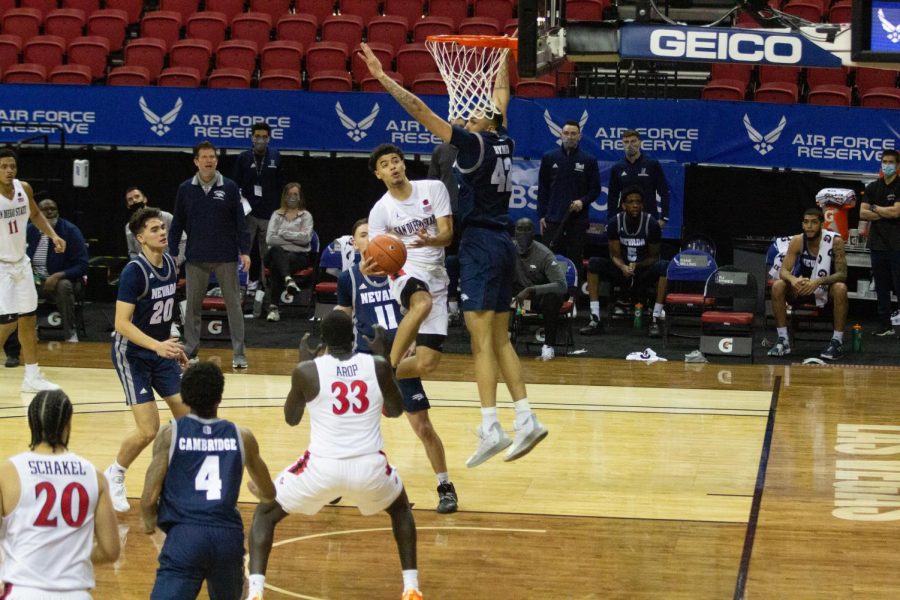 No. 1 seed San Diego State men’s will look to avoid a 3-peat by No. 2 seed Utah State in the Mountain West Conference championship game on March 13 at the Thomas & Mack Center in Las Vegas.

Saturday marks the third time both teams will face each other in the tournament championship game in as many seasons.

While Utah State won the rubber match in 2020 after its 2019 tournament win, both teams were stripped of their chances to compete in the NCAA Tournament last year due to COVID-19.

Senior forward Matt Mitchell, who has started in a MWC tournament championship game in each of his four years at SDSU, said he’s proud to be back for year four.

Like in years past, the Aggies remain a formidable opponent through the play of junior forward Neemias Queta.

Those honors don’t come without statistics to back it up.

A rim protector and offensive threat in the post, Queta has averaged 14.8 points, 10 rebounds and 3 blocks per game this season.

One matchup to watch is Queta against SDSU junior forward Nathan Mensah.

Mensah played a lively first half of the season, but soon struggled offensively. Those struggles have even continued into tournament season.

Against No. 8 seed Wyoming in the quarterfinals, Mensah notched just one point (0-for-2 field goals) and five rebounds.

Mensah’s woes carried into the semifinal against No. 5 Nevada, as he was held scoreless on no attempts. He had only 2 rebounds.

In order to get going on offense, Dutcher said Mensah needs to stay out of foul trouble.

“Every game is not your game, depending on how the defense plays,” Dutcher said. “Nathan had a few post touches (against Nevada) but he could not get the rhythm of the game because he got in early foul trouble. That is why we are so lucky to have the bench we do.”

Aggies-Aztecs tips off at 3 p.m. The game will be broadcast nationally on CBS.