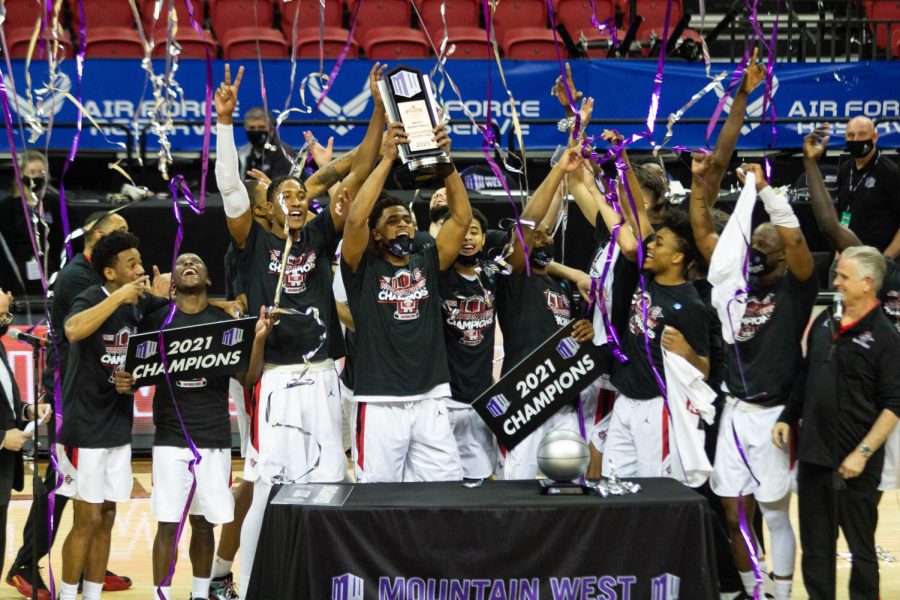 by Kyle Betz and Luis Lopez

While SDSU was happy to be in the game, playing Utah State again after two losses earlier in the regular season and last year’s championship game was exactly what they wanted.

“I think if (the SDSU players) had a choice, (USU) would be the team they wanted to play because they have some pride about them,” Dutcher said. “I don’t know if the coaches were the ones excited about playing them, but the team was and they’re the ones that have to play, so it worked out well.”

The Aztecs are back in the NCAA Tournament for the first time since 2018.

Senior forward Matt Mitchell added MWC tournament Most Valuable Player to his resume after putting up 14 points, four rebounds and an assist. The Riverside, Calif. native was named to the MWC All-tournament team along with senior guard Jordan Schakel, who scored nine points Saturday.

Mitchell said the tournament win was another step in accomplishing the team’s 2020-21 goals.

“Emotions are high,” Mitchell said. “This is everything we’ve spoken to life at the beginning of the season and we followed through with it.”

Queta had his way in the first half, bagging 12 points, three rebounds and three blocks.

But SDSU senior forward Joshua Tomaić and Mensah stepped right up to the challenge in the second half, pestering Queta in the post.

Queta had just six points in the second half along with three rebounds.

The Aztecs struggled heavily from 3-point land (13%), but the team’s post play kept its lead.

Mensah’s eight second-half points (10 total) and eight total rebounds propelled the Aztecs to success down low. That’s after scoring just one point during the Aztecs’ first two games of the tournament.

Tomaić had six points and four boards — two on the offensive side of the floor.

As a team, SDSU went to work in the paint, scoring 40 points in that area compared to USU’s 26.

“Both (Mensah and Tomaić) were productive today,” Dutcher said of the SDSU bigs. “When you’re getting good play from both Nathan and Joshua, we’re really hard to guard.”

All 10 Aztecs who appeared scored at least once and SDSU trailed or was tied with the Aggies for less than three minutes of game time.

While the Aztecs’ offense provided just enough to get the win, it was the typical SDSU defense that got it the title.

The Aggies committed 16 turnovers on the day — 10 of which were caused by Aztec steals. Those USU errors turned into 14 SDSU points.

Those advantages proved to be too much for the Aggies, and it resulted in the Aztecs getting showered in purple and silver streamers.

Among those who will appreciate this title the most are players like seniors Terrell Gomez and Tomaić, who transferred to SDSU for this exact reason — to win titles and compete in March.

“This is what I came here for,” Gomez said. “Now I’m just excited to play in the big dance, something I’m going to remember for the rest of my life. This is gonna be something that I can talk about, motivate kids in the future about and it’ll be a part of my story.”

The Aztecs now await Selection Sunday and their position in the NCAA Tournament, which is set to begin on March 18.

SDSU plans to travel straight to Indianapolis Sunday for March Madness after its stay in Las Vegas.

While the Aztecs can celebrate the victory, for now, Mitchell said their work is just getting started.

“We’re only moving forward from here,” Mitchell said. “We’re happy but we can’t be content.”