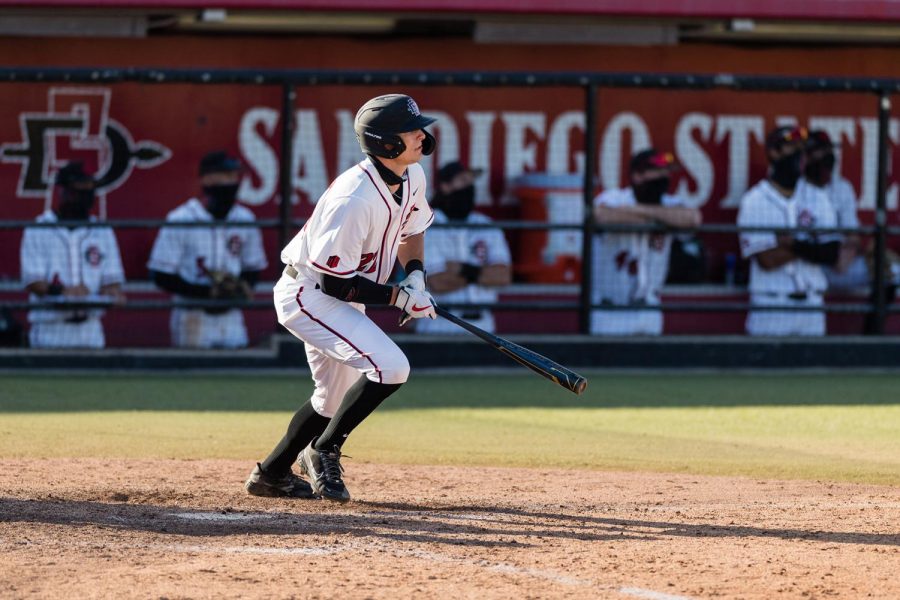 by Andrew Finley and Jason Freund

San Diego State baseball continues to turn heads as it won its fourth consecutive series, taking care of business against UNLV. The Aztecs (9-4, 4-2 MWC) won two of three games in the tightly-contested matchup with no lead higher than four during the series against the Rebels (6-3, 6-3 MWC).

The Scarlet and Black started the series on the right foot, winning game one of the doubleheader by a score of 3-1. Sophomore outfielder Jaden Fein — the three-time Mountain West Conference Player of the Week — went 3-for-4 with two doubles and a run scored with sophomore pitcher Michael Paredes earning the win on the mound.

The Rebels would strike back in game two of the doubleheader and force the rubber-match, outscoring the Aztecs 5-1 with sophomore Troy Melton taking his first loss of the season. Melton went 5.1 innings and allowed three runs on eight hits and five walks while striking out three batters on 110 pitches.

Game three saw the Rebels take a quick 3-0 lead against Aztecs redshirt freshman starter Ricky Tibbett in the first two innings of play. However, the Aztecs chipped away at the lead until the home team exploded for six runs in the seventh inning against UNLV sophomore reliever Jimmy Gamboa. UNLV came awfully close to retaking the lead in the night, but junior reliever Tre Brown buckled down to secure both the save and the 8-6 win.

The series was won by the Aztecs, who are quickly making their presence known in the MWC and NCAA, but UNLV gave the Scarlet and Black a run for their money.

Here are three observations on what gave the Aztecs the edge over the Rebels and what made the series as close as it was.

1. Paredes dealing on the mound

In each of his four starts this season, Paredes has improved upon his previous performance. He has increased innings and strikeouts while lowering the number of runs he’s given up in each of his outings.

Paredes’ performance against UNLV was no exception and may have been the best performance of his career.

After striking out a pair of Rebels in the top of the first, Paredes looked sharp and would stay sharp for the rest of the game. He would give up just three hits while allowing an unearned run in the first three innings before pitching five perfect frames to wrap up his outing.

In those five innings, Paredes struck out four batters, with his final slash line showing eight innings of one (unearned) run baseball with just three hits allowed while striking out six, not allowing a batter to reach base from the fourth inning on and earning the win. Brown would close the game and earn the save without allowing a baserunner as well.

On the season, Paredes owns a 1-0 record in four starts with 19 strikeouts to just three walks in 25 innings pitched and a 2.16 ERA. Opponents are batting at a measly .200 clip against Paredes this season.

While the Aztecs were ultimately the winners in this series, one key problem persisted: the walks.

SDSU pitchers currently lead the Mountain West in free passes at a total of 76. That’s 26 more walks than Nevada, which ranks second in the conference with 50 walks.

Against UNLV, SDSU pitching continued to fill the bases via walks. While Paredes and Brown combined to allow no walks in the first game, three pitchers walked nine in game 2 and four pitchers walked six in game 3.

Melton’s three earned runs were the result of five walks.

A leadoff walk came back to bite Melton in the sixth inning as well. A walk to sophomore first baseman Austin Pfeifer resulted in the third UNLV run on senior shortstop Trevor Rosenberg’s RBI single.

While the Aztecs walked only six batters in game 3, command issues extended innings to a point of concern.

Redshirt sophomore reliever Aaron Eden, who leads the team in walks, extended the sixth inning as four straight batters saw at least a three-ball count, with all but one extending to a full count.

Tension increased in the ninth with a two-run lead and Brown on the mound. He struck out the first batter he saw, but back-to-back singles put men on base.

Brown escaped the winning, but the Aztecs need to nix their habit of handing out free passes if they want to continue winning.

While the bats were slow to heat up, they came alive at the right moments to push SDSU to victory.

With the game tied at one run apiece in the bottom of the fifth, the Aztecs got a two-out rally started with senior shortstop Mike Jarvis reaching on an error. After stealing second, he would be off to the races after junior center fielder Matt Rudick singled to center to get Jarvis home.

The Aztecs would add on the following inning with a sac fly from senior left fielder Ryan Orr, which brought home senior first baseman Jacob Cruce. In a game dominated by good pitching on both sides, the two-out RBI from Rudick ended up being the difference in the game.

SDSU only got a single run in game two of the series and, up until the sixth inning, had only two in game three as UNLV pitching kept their hitters guessing.

The seventh inning is when the SDSU bats truly came alive. Back-to-back singles from Fein and redshirt sophomore first baseman Brian Leonhardt kicked the inning off but UNLV got two quick outs on two ground balls.

Four more hits plus a hit batter led to the Aztecs sparking a six-run rally to take the lead and never look back.

Weather concerns in the Colorado Springs area have brought a change of plans as, instead of flying to Colorado, the Aztecs will be welcoming Air Force to Tony Gwynn Stadium for a three-game series beginning on March 20.