San Diego State to embrace the Madness this March 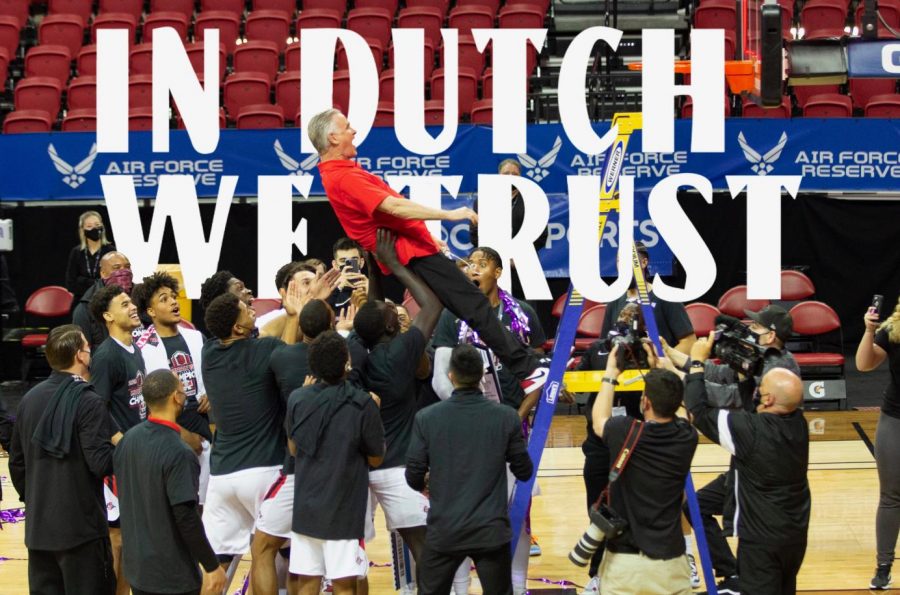 After cutting down the nets at Thomas & Mack Center in Las Vegas, men's basketball head coach Brian Dutcher did a "trust fall" from the top of the ladder landing in his players arms after winning the Mountain West Conference Tournament

It’s been over a year since San Diego State men’s basketball was stripped of its chances to compete in the NCAA Tournament due to the onset of the COVID-19 pandemic.

It’s also been three years since the Scarlet and Black have competed in the Big Dance.

In 2018, the then-No. 11 Aztecs lost in the first round in heartbreak to No. 6 Houston and a name that leaves a sour taste in the mouths of SDSU fans: Rob Gray.

Now, the Aztecs have finally managed to make their way back to one of the biggest stages in all of sports.

This time as a No. 6 seed, SDSU will face a pesky No. 11-seeded opponent in Syracuse this Friday.

A 30-2 season that came to an abrupt halt was followed up with a 23-4 season, highlighted by a Mountain West Conference title and MWC tournament championship.

Head coach Brian Dutcher said he’s glad to be back in the NCAA Tournament, although he feels for three in particular who weren’t able to return in 2020-21.

“In the case of Yanni (Wetzell), Malachi (Flynn) and KJ Feagin, they had a one-year window,” Dutcher said. “They played  wonderful college careers and never played in the NCAA Tournament one time, so I was heartbroken for that more than anybody else.

“I told the guys that came back, we’ll have a chance to do it again next year. And here we sit, we found a way to do it. So they’re going to get an opportunity to play.”

Senior guard Jordan Schakel said he knew he would be back in the tournament and was hurting more for his graduating teammates than himself in 2020.

“For me, personally, there was not any pain because I knew I was going to have a chance this year,” Schakel said. “For the guys that graduated last year and waited their whole careers to get to the tournament, I think that’s where the pain was. We feel blessed that we have another opportunity to play the game we love and get to the tournament at the biggest stage.”

The Aztecs ended last season in a conference tournament championship game loss to Utah State. Little did SDSU know that would be the last time it would play in a game before the pandemic.

Following this year’s conference tournament title game win over the Aggies, senior forward Matt Mitchell said it’s a chance for him and the upperclassmen to get redemption.

“Last year is still a little bittersweet,” Mitchell said. “But I think it (making the tournament this year) kind of does, in a sense, wash it away for the older guys.”

This year’s tournament will also look different from that in years past.

March Madness will be held in one city, Indianapolis, with players required to socially distance, wear masks, practice at designated times and quarantine anytime they aren’t participating in basketball activities.

The team was even separated Sunday when NCAA Tournament seeds were announced.

Dutcher and the student-athletes had to watch the Selection Show over Zoom rather than in-person.

“It’s surreal — we got tested and we’re in a room,” Dutcher said Sunday. “We cannot leave our rooms. We test again first thing in the morning and if we get two negative tests, we can start doing a few things together as a team, so everything’s a challenge.”

Although there are strict protocols in place, the Aztecs will get to play in front of fans — something they weren’t able to do at Viejas Arena this season.

Schakel said having fans in basketball venues is one of the biggest reasons he plays the game.

“It’s going to be fun to get to play in front of fans and that is part of the reason why we play basketball,” Schakel said. “I am looking forward to it and I will have my parents in attendance for sure.”

The tournament will look different this year, but brackets are finally back and so are the Aztecs.