Column: How far can SDSU go in the NCAA Tournament? 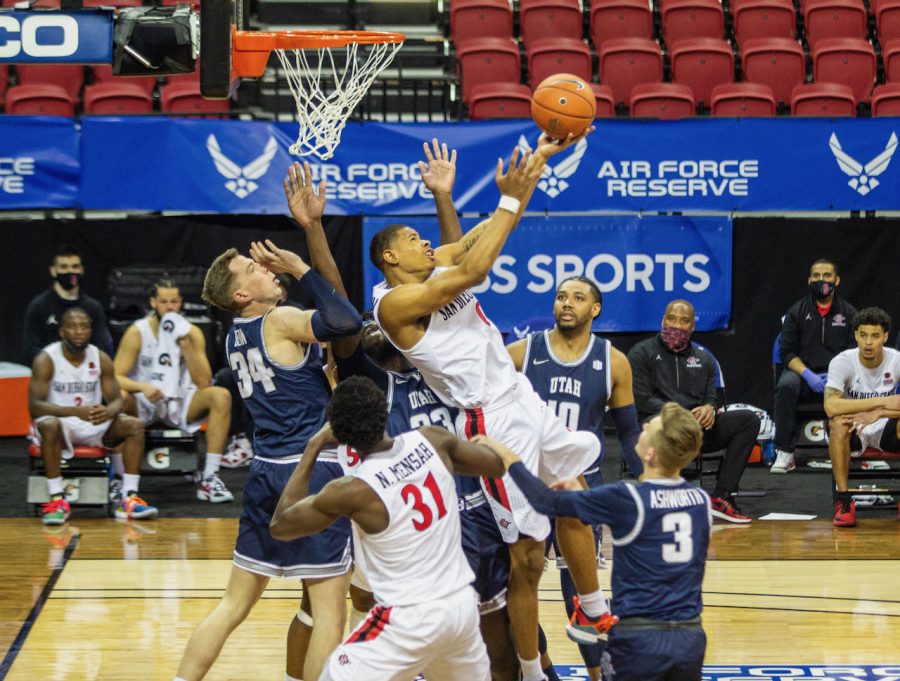 No. 16/18 San Diego men’s basketball was picked as the No. 6 seed in the Midwest region of the NCAA tournament on Selection Sunday.

Between now and Friday when the first game begins with No. 7 Florida facing No. 10 Virginia Tech at 9:10 a.m. PT in the South region, people across the country and around the world have the opportunity to make the perfect bracket.

In addition, people are listening to experts about which higher seeds can pull off an upset or even win it all.

“My bracket buster is San Diego State,” Davis said. “I have them going to the Elite 8.”

Getting to the Elite 8 will be difficult and when it comes to March, you always need a little luck along the way.

A team needs six consecutive wins to win the national championship, so how far can the Scarlet and Black go?

With the weather factor of wind,  Aztecs head coach Brian Dutcher hopes he can take out the “d” in winds during the tournament.

“I think with the absence of wind, we might even make some threes (against Syracuse) this time,” Dutcher said. “We’re excited to be here, we’re excited to start the next phase of our journey and hopefully have some meaningful wins in March.”

Boeheim has led the Orange to 35 NCAA Tournament appearances, including a 2003 National Championship when Carmelo Anthony was on the team.

Dutcher said Boeheim understands the preparation it takes no matter the seed Syracuse gets in an NCAA Tournament.

“Jim Boeheim is a master coach,” Dutcher said. “He knows how to get a team ready to play. He’ll be ready for us. We’ll have to play well in order to have a chance to win.”

If the Scarlet and Black take care of Syracuse, they could take on another longtime coach in Bob Huggins of West Virginia, who has taken the Mountaineers to 10 NCAA Tournaments in his 14 years at WVU and 25 total Tournament appearances. West Virginia is the No. 3 seed and will face No. 14 Morehead State on Friday.

SDSU could take on another perennial head coach in college basketball in Houston’s Kelvin Sampson in the Sweet 16. The last time the Aztecs and Cougars faced off was in the 2018 NCAA Tournament when Houston won the game in the final seconds on a driving layup. In 2021, the Cougars are a No. 2 seed and will face No. 15 Cleveland State in the first round on Friday.

During the season, Dutcher and Sampson were in discussions to play a game late in the season, but a date was not set.

Diving into the bracket

With those teams, SDSU had a senior guard – DJ Gay and Xavier Thames, respectively – lead the team to a top-16 finish.

This team does not have a level of a senior point guard like Gay and Thames, but senior guards Trey Pulliam and Terrell Gomez have shown they can get to the bucket in late-game situations. That was evident last week during the Mountain West Conference tournament.

Even if the Aztecs don’t draw West Virginia or Houston in the Round of 32 or the Sweet 16, it will still be a tough road to advance in the Tournament. If the Aztecs end up playing double-digit seeds in 15-seed Cleveland State, 14-seed Morehead State or 10-seed Rutgers, those teams would have momentum because of the upset victories.