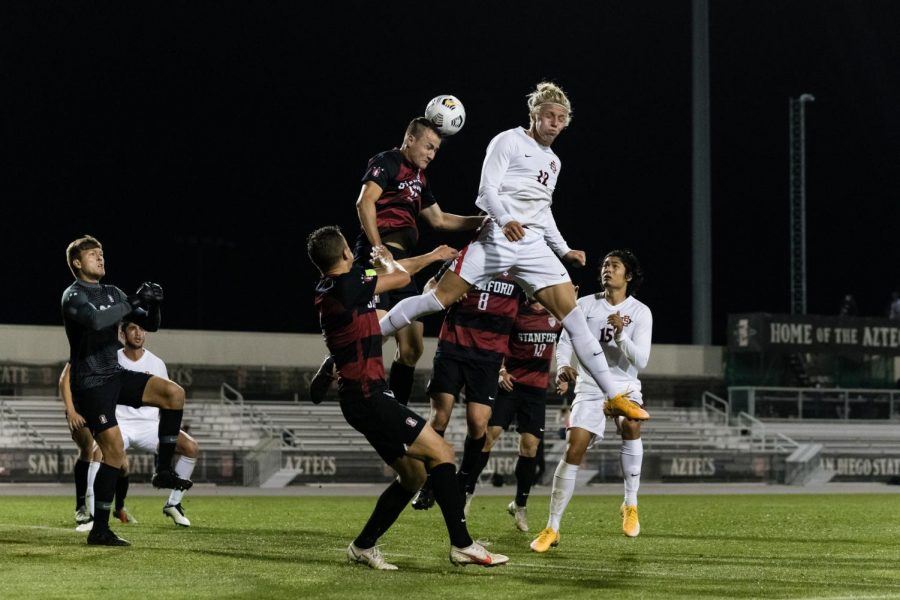 San Diego State men's soccer sophomore forward Austin Wehner goes up for a header during the Aztecs’ 1-0 loss to the Cardinal on Feb. 27 at the SDSU Sports Deck.

San Diego State men’s soccer (0-3-1) fell 3-2 on Saturday to California (1-3-0) in a matchup of two teams looking for their first wins of the season. The Aztecs were reduced to 10-men when sophomore defender Kyle Colonna was shown a straight red card in the 73rd minute for a late tackle in the Cal 18-yard box.

The winning goal came shortly after the red card, when Cal sophomore forward Arman Samini got on the end of a defensive miscommunication and made his way around Aztec sophomore goalkeeper Tetsuya Kadono before slotting the ball into the back of an empty net.

The Aztecs outshot the Bears 13-8 during the game, including a 9-2 advantage in the first half. The only goal the Aztecs were able to produce from their opportunities in the first half came in the 22nd minute, when freshman midfielder Iñigo Villaldea converted a free kick from 19-yards out that got through a crowded penalty area before finding the back post.

The Aztecs had another opportunity two minutes later when a cross from the left side found sophomore midfielder Blake Bowen on the top of the 6-yard box, which he struck off the crossbar and over the goal. Cal got its equalizer in the 33rd minute when a cross from the right side by Samimi found an open sophomore midfielder Fahmi Ibrahim near the back post for a tap-in.

The first half was dominated by the Aztecs. The Aztecs held the majority of possession and looked like the more dangerous team.

“Our mantra is, ‘How can we impose our will on our opponents?’” head coach Ryan Hopkins said after the game. “We thought we did that with our style in the first half. I thought we should have been up two or three goals.”

Junior midfielder Laukoa Santos said the Aztecs played an aggressive first half but didn’t find as much success during the last 45 minutes.

“We came out the first half flying,” Santos said. “We felt like we imposed our will on Cal. It couldn’t have been a better half in my opinion, and I think the group felt that. This year we tend to dip in the second half. We will go back to the drawing board and find solutions on how to fix that, and how to put a complete performance together.”

Cal took the lead in the second half in the 62nd minute, when Cal junior forward Johnathan Estrada converted on a free kick that found the upper right corner of the net. SDSU sophomore defender Kyle Colonna, who conceded the free kick, responded a minute later when he got on the end of Villaldea’s corner kick and headed it past the Cal goalkeeper.

“We’re always talking about resiliency,” Hopkins said of going 2-1 down. “Credit to our guys and credit to Kyle. He has the foul for them to score the goal, and he comes back and burries one on a corner.”

That was the start of what turned into an eventful 10 minutes for Colonna, which ended with him being shown a red card. At first glance, the referee’s decision seemed to be a little harsh.

“I mean it was from behind, but there was no malicious intent,” Santos said of the red card. “It was just a tackle to stop the counter. I guess we can go and watch the film and see, but in my opinion, no, not at all.”

It took eight minutes after the red for the Bears to take their lead back when Samini was able to pounce on a miscommunication error between Kadono and his defenders. Although time remained on the clock, the man disadvantage proved to be too much and the Aztecs were not able to create chances at the end of the game. The early missed chances in the first half came back to haunt them.

Next up for the Aztecs is a trip up to Corvallis, Oregon where they will face No. 6 Oregon State on Saturday March 20 at 12:30 p.m.