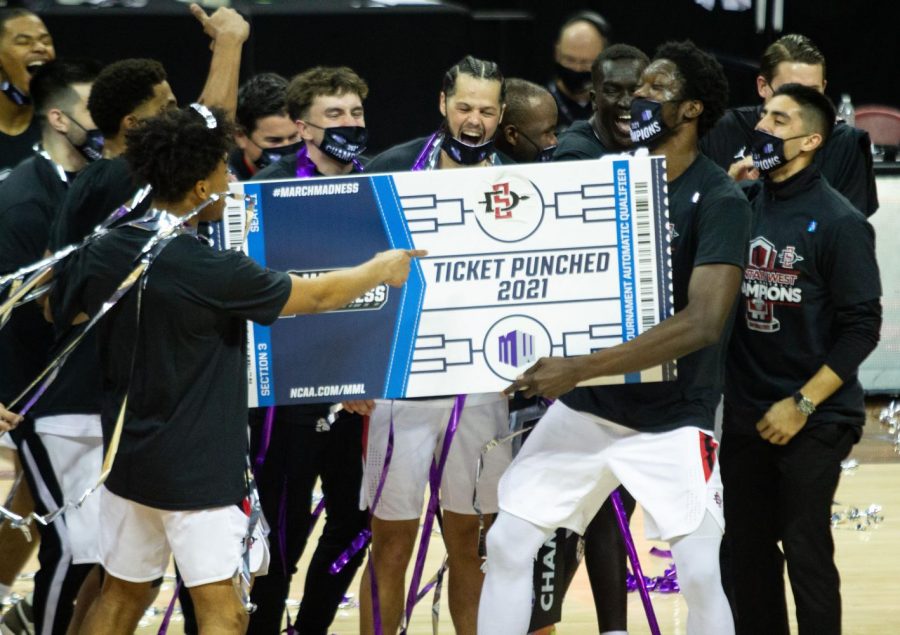 After sweeping the Mountain West Conference regular season and tournament titles, San Diego State men’s basketball is already a “lock” for the 2021 NCAA Tournament in Indiana.

Now, they finally have a seed and an opponent.

The NCAA Selection Committee put SDSU as a No. 6 seed in the Midwest Region, and it will face the Syracuse Orange from the Atlantic Coast Conference on Friday, March 19.

This is a rematch for both teams since the 2011-12 season, when the Aztecs lost to Syracuse 62-49 on the U.S.S. Midway in the Carrier Classic.

“I’m glad we’re not playing them on the aircraft carrier this time,” head coach Brian Dutcher said jokingly. “With the absence of wind (being indoors) we might actually make a couple of threes this time around.”

Fresh off of winning the tournament title in Las Vegas, SDSU decided to divert from flying back to campus. Instead, they took a direct flight to Indianapolis to quarantine before the tournament starts.

Dutcher said maintaining a “bubble” and adhering to strict guidelines for The Big Dance has become commonplace for the team.

“We are used to it at this point — it will be even more rigid (regulations inside the bubble) I think once we get to Indianapolis from what I am understanding,” he said. “But I said from the start (of the season), you have to be flexible, both with your schedule, you may get games canceled with having teams (deferring games).

“(The Vegas bubble) was just the next step in being flexible and just rolling with the way it goes so we get onto the basketball floor. We take great joy every time we can step on the floor.”

The team watched Selection Sunday from their own hotel rooms on a Zoom meeting. Everyone was required under NCAA guidelines to stay in their rooms, quarantine and undergo daily COVID-19 testing.

The Orange, led by longtime head coach Jim Boeheim, are notorious for running an intricate style of defense: the 2-3 zone.

What makes it different from other defenses? Syracuse is known to recruit athletic wing players, which often play high up on the perimeter to cause havoc on opposing guards.

“Anything that you do (on offense), they’ve seen it a thousand times,” Dutcher said. “There’s no set play they haven’t seen, no rotation they haven’t made. So it’s going against a team that’s mastered their trade (defense).”

Senior guard Jordan Schakel said encountering the 2-3 zone for a full 40 minutes will propose challenges, but he’s confident the team will be able to play well against it and rise to the occasion.

“We just got to find the holes in their zone (defense),” he said. “We got to create a game plan that will create open shots for us, and when we get the shot, just knock it down.

“That’s what March is for, big-time players and big-time shots.”

Senior forward Matt Mitchell felt excitement when he saw the Orange as the Aztecs’ opponent. Why? He was a big fan of Syracuse growing up as a kid.

“If you talked to my parents or anybody else that knew me, I wanted to be Carmelo Anthony (growing up),” he said.

Mitchell modeled his game after Anthony with an ability to score efficiently in the mid-range area, and skilled knowledge of posting-up opposing players.

In fact, he was so committed to the team that he even wore an orange headband as a kid, just like Anthony did.

“(I would wear it) anywhere I could, honestly,” he said of the headband. “I would try and wear it out on the court. My dad told me to be my own person, be my own player and grow up to be Matt Mitchell, not Carmelo Anthony.

Despite the excitement, Mitchell said the team understands the big opportunity lying ahead of him.

If SDSU were to beat Syracuse on Friday, they could play another familiar opponent in the third round.

On the opposing side of the bracket lies No. 3 seed West Virginia, who will be playing 14-seed Morehead State.

If the Mountaineers win in the second round, SDSU could face them for the first time since the 2015-16 season, when the Aztecs lost in the Las Vegas Invitational championship game.

As for now, the Aztecs, along with the other 67 tournament teams, are undergoing or will be going through a quarantine process at their hotel and routine COVID-19 testing.

Dutcher and the players are forced to stay in their hotel rooms during the quarantine period before any basketball-related activities can begin. If the Aztecs make a deep run, they could be away from San Diego for possibly three to four weeks.

“I’m just grateful to be here,” Dutcher said. “(I) have an opportunity to lead a bunch of young men into the greatest part of basketball, which is the NCAA Tournament. To have that experience with all of them, we’re excited for that.”

If SDSU or other teams from multi-bid conferences are forced to withdraw because of COVID-19 cases, the Selection Committee stated that any of the First Four Teams Out (Louisville, Colorado State, Saint Louis and Ole Miss) will replace them.

If a positive case happens before or during a tournament game, the committee said it will be declared a “no contest.”

The Aztecs’ second-round matchup versus Syracuse will be on Friday, March 19. The game will be played at Hinkle Fieldhouse at 6:40 p.m. on CBS.