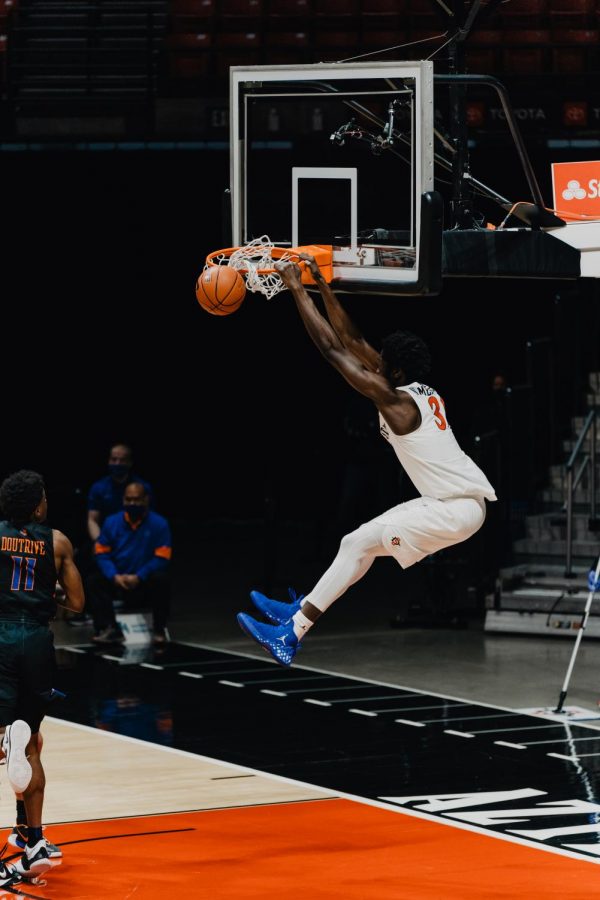 No. 16/18 San Diego State men’s basketball secured the No. 6 seed in the Midwest region and will face No. 11 Syracuse in the first round of the NCAA Tournament at the Hinkle Fieldhouse in Indianapolis.

The game is scheduled for a 6:40 p.m. tipoff on Friday, March 19 and will be televised on CBS.

Syracuse is one of seven Atlantic Coast Conference teams in the NCAA Tournament.

While it seemed obvious that SDSU would go dancing in March, they punched their ticket to the NCAA Tournament by defeating No. 2 Utah State 68-57 in the Mountain West Conference Tournament.

The last time these two teams squared off was the “Battle of the Midway” in 2012, a game that took place on the USS Midway Museum.

With an uneven court thanks to the rippling ocean and howling winds, Syracuse defeated SDSU 62-49.

Now with the teams on a more level playing ground, the Aztecs will be playing to pay back the favor against the Orange.

On offense, Syracuse mainly rolls with their core five starters and are led by junior guard Buddy Boheim.

The son of head coach Jim Boheim, the guard has been on a tear as of late, scoring double-digit points in his last nine games. During that stretch, Boheim has averaged 21.3 PPG while shooting 47% from 3-point range.

In the two games Syracuse played in the ACC Tournament, Boheim scored 27 and 31 points respectively en route to becoming the first Orange player to be named to the ACC’s All-Tournament First Team.

Head Coach Jim Boheim will ride with his starters throughout the game, choosing to keep his main five in the game instead of swapping out his deck with bench players.

This high continuity amongst the starters has led to an Adjusted Offensive Efficiency ranking of 114.5 by KenPom, good for 22nd in the nation.

However, what truly makes Syracuse such a tough opponent is their defense. Specifically, a 2-3 zone defense.

The 2-3 zone isn’t a defense that the Aztecs have seen all season. At most, they saw it when they played Air Force, but the Falcons used it sparingly.

When asked about Syracuse’s 2-3 zone, senior forward Matt Mitchell outlined a potential plan of attack for the Aztec offense.

“The key to attacking their zone is getting to the heart of the defense and getting to the middle,” Mitchell said. “(The key is to) be able to make plays not only inside, but outside as well, and being able to spread the ball out on to our shooters.”

San Diego State’s defense is no slouch either, as their 60.6 OPP PPG ranks eight-best in the nation.

SDSU will also need players like Trey Pulliam to continue their hot shooting and will rely on both Joshua Tomaic and Nathan Mensah to put a damper on Syracuse’s high-flying offense.

The winner between the Aztecs and Orange will play the winner of No. 3 (No. 13) West Virginia and No. 14 Morehead State.