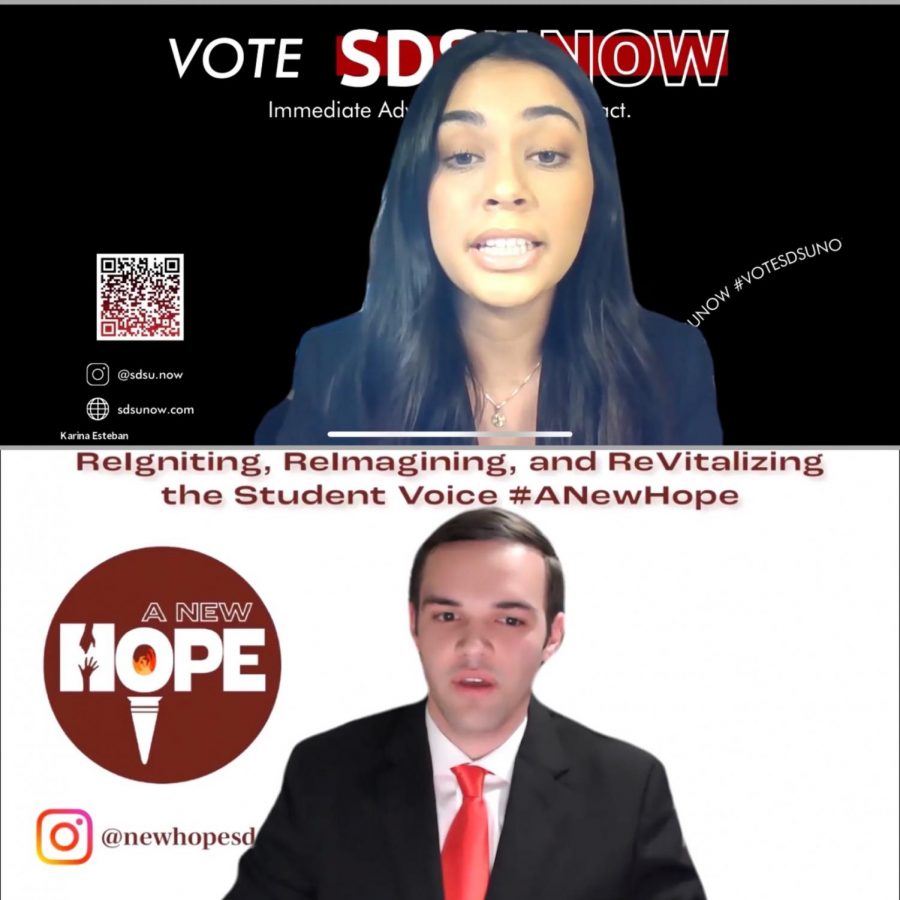 Two candidates for Associated Students Executive Vice President took part in an online debate moderated by The Daily Aztec in preparation for the A.S. elections scheduled to take place next week from March 22 to 25.

Kole Wellenstein from the “A New Hope” slate and Karina Esteban from the “SDSU Now” slate took to the virtual stage to debate a variety of topics including the ongoing COVID-19 pandemic, diversity and returning to campus after the pandemic.

Wellenstein, who has served as the Commissioner of Recreation at San Diego State and has worked on the Alcohol and Other Drugs Task Force. He has also served as Interfraternity Council Secretary. Wellenstein said his experience would allow him to advocate for student voices during projects like the Mission Valley expansion.

“(As your Executive Vice President I will) further my work prioritizing student needs in the ARC and Mission Valley expansion, ultimately creating platforms for the student voice and spaces, we are silenced to create real and inclusive change, Wellenstein said.

Esteban has served on the Panhellenic Executive Board, A.S. External Relations and Lobby Corp and the Dance Marathon and Aztecs Rock Hunger Leadership Teams. She said her personal struggle with her mental health is what drives her to ensure SDSU students have access to mental health services on campus.

“The time within COVID-19 has brought up many mental health issues across the student body which is why I’m here today to ensure further accessibility to these resources,” she said.

Esteban said that SDSU “failed to initiate proper policy” for students who returned to campus during the COVID-19 pandemic, and said she would use her role as Executive VP to ensure a safe return for students next semester.

“Moving forward, I would really want to ensure accessibility for vaccinations for students to be able to come back in a safe environment,” she said. “Through the role of executive Vice President, I would really ensure intentional programming, to give students a safe way to be on campus and to be able to connect with other students and still feel that sense of community and get the most out of their experience here.”

Wellenstein also pointed out the lack of testing protocol put in place by the university. He also said it would be important for A.S. to work with other associations on campus to ensure COVID-19 safety.

“In terms of Greek life I think it’s really important to consider that accountability is a two way street,” he said. “Ensuring that not only are we working with fraternity and sorority life and then additionally working with the Interfraternity Council and the College Panhellenic Association to ensure that there’s a continuation of basic safety protocols and standards that are set in place to ensure that parties aren’t going on.”

The candidates also addressed diversity on campus and how they would continue to keep diversity a priority.

Esteban said she hopes to inspire other people of color to move into leadership roles, as well as ensuring campus resources centers have a seat at the table.

“Moving forward, I really want to make sure that we’re having intentional conversations with everyone else really asking how we can bring them to the table as well,” she said. “And really making sure that I’m asking (campus resource centers) how can we show your information in the best way, and that we are bringing those diversity aspects into spaces that do not traditionally make that a priority.”

Wellenstein said he also plans to work with campus resources centers on a mental health initiative. He also said it was important to ensure campus identity and cultural centers would be readily available for the Mission Valley Campus when it opens.

“For my year-long mental health initiative, I will personally reach out to various communities to ensure that I have representation from all over campus on this committee, including representatives from every cultural and identity center,” he said. “And I think one thing that is additionally important that can be contributed to this is making sure that in projects such as the Mission Valley Expansion, that these spaces, like the identity and the cultural centers that we see on the current main campus – that came about as an afterthought – in the Mission Valley Project aren’t an afterthought, by making sure that they’re in the plans from the beginning.”

Esteban said she would focus some of her efforts as Executive VP on bringing back campus pride and a sense of community through athletics.

“Athletics play a huge role in bringing our SDSU community together,” she said. “I also want to bring A.S. programming to athletic events to bridge the gap between A.S. and athletics.

Wellenstein also said unification through SDSU athletics was one of his top priorities.

“I want unification in our fall homecoming and (to) use it as an opportunity to amplify SDSU pride through bringing together various campus communities at once,” he said.

A full recording of the debate is available here.

Voting in the 2021 A.S. election begins March 22 and goes through March 25. All SDSU students can vote through the SDSU Webportal.