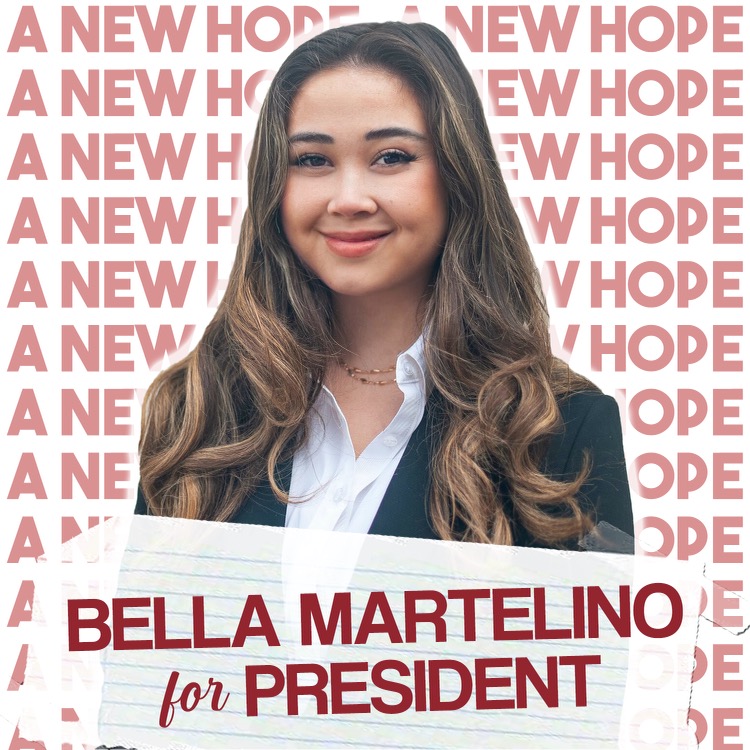 “Yeah so, I ask myself that a lot too. The first time I stepped onto campus I definitely would not believe you if you told me this is where I was going to be today. I had an unconventional relationship with leadership growing up because I never felt the need to be that person, you know, who took the wheel every single time. I moved around a lot. I grew up in the Philippines for the first five years of my life and then moved around California ever since then. I’ve been to nine different schools before coming to college, so when I stepped onto the SDSU campus I was like ‘Wow, four years, one place, I actually want to make a change and make a difference here.’ That’s kind of how that relationship with leadership changed.”

“So, through my upbringing number one in cultural communities such our APIDA community and also our Latinx communities on campus as well as getting involved in the various service, Greek and academic orgs, I really gained a holistic view of these campus communities, especially the ones you didn’t often see interacting. Furthermore in the Associated Students lens, I served as executive vice president this year, which honestly gave me that experience and insight into how our university as well as our administration works and more importantly the understanding at which points it has failed us. So, through that holistic experience at being number one, at the ground level with students and then also speaking in those higher level spaces with administration, I really learned the difference between what it really means to be a leader versus what it means to be someone who leads. The latter is something that ignited my passion to continue that service and run for the position of A.S. President.”

“The A.S. scope number one I served as, so my journey with A.S. started when I was in the residence halls and I saw a poster saying run for A.S. elections. I had no idea what A.S. was but I thought ‘hey why not?’ That’s kind of how my journey started. So I first joined A.S. on the university council side, serving as the representative for the undeclared college. But with my, with continuing with that, the next following year and just with my experience with the underrepresented and represented communities across campus, it really ignited a passion for me to run for something, especially considering campus life and campus pride.”

“So that’s why I ran for A.S. executive vice president, which is the position I currently hold. As A.S. executive vice president this past year I’ve served on the board of directors, the campus advisory committee CFAC, the equity council, and the university senate committee on sustainability. In those spaces I’ve continuously activated, advocated for the student voice, in discussions regarding diversity and inclusion on the student diversity commission. for sustainability in the ARC and Mission Valley expansion, for mental health regarding rest and recovery days in the spring break discussion as well as standing against category four student fees, which are preapproved presidential fees for students in CFAC, once again the campus advisory committee. One of my goals as A.S. president is to continue to connect our campus communities, especially coming back in the fall.”

“This year we had to connect in virtual environments and one of the initiatives I implemented as executive vice president was an annual A.S. student leader mixer, in which student leaders representing over 60 RSOs came into a virtual space with that intention to connect and to pave that way for collaboration. So that’s it for the A.S. scope but I think what is really vital to my experience and my passion for running for this position are the underrepresented communities and represented communities that I do serve. I’ve actively been involved. I’m apart of orgs such as APSA, which is Asian Pacific Student Alliance, Tijuana Home Build, Women in Science Society and Alpha Kai Omega as well as Panhellenic. That’s given me that ground level perspective on what students need out of various service, academic, cultural and social organizations, what they need from SDSU in order to succeed. In these spaces I have taken on even executive leadership. I currently serve as the director of campus relations for the College Panhellenic Association and in every single role such as that one, I’ve used that as an opportunity to outreach to those organizations that we haven’t had collaboration with in the past. So I really think that in every single space I have stepped into on this campus, I’ve done so with that intention and more importantly, the action to uplift those communities and I want to continue that work as A.S. President, making sure that every community, once again, has not just a seat at the table, but an actual voice at the table.”

“I actually joined A.S. as a sophomore, so coming into A.S. I definitely did feel like there was that divide between traditionally represented voices on campus versus those that were underrepresented. A really big thing that Associated Students has to tackle is the relationship that we have with our campus communities. It’s really expected that they reach out to us and they tell us what we need, especially with campaigns such as Your Voice Matters, it’s like ‘submit to us’ but when are we going into these spaces actively and really being a part of these communities in order to bring them into the fold of A.S. because Associated Students is supposed to represent everyone but oftentimes it feels that some voices are left out or have their own spaces so there is a disconnect.”

“That is something that I would like to change, I would definitely want to bridge that gap between those underrepresented and represented communities within A.S. and I feel like I have been doing so and in every position and role I’ve stepped into as well as my work obviously as number one, A.S. Executive Vice President with the student leader mixer, that was a really big platform even in a virtual learning environment to have that space for y’know these different leaders from all across the campus to have that space to collaborate and connect  and continue that onto next year in the fall and hopefully have that platform to have these hard conversations as well as continue that collaboration.”

“Something I like and dislike about A.S. is kind of two sides of the same coin, at one part like yes we represent the student voice and we have this, y’know, amazing space to step into these spaces with administration, with the university senate and the President’s office and who are really supposed to value that shared governance and respect the student voice.”

“One thing that I dislike is obviously how this year, how shared governance was completely disrespected, especially in the decision of spring break. I think that was obviously very highlighted because 16,000 students, the voices of 16,000 students were completely shut out and that’s almost half of our student population. That goes to show shared governance is not respected between the university senate and the president’s office. In the past that is something that I loved about Associated Students, that is the part of me that really respected this organization and made me want to join. So moving forward it’s really all about strengthening shared governance, making sure there are student voices in every single level of the decision making processes with our university, whether that’s on the ground level with simple things, especially considering matters such as parking and student fees, making sure that student voice is represented in every single space. A.S. does provide that platform but it has also continued to further that work um, in making sure not only that we respect it, because A.S. does respect it, but to make sure that the other two governing bodies, the office of the President and the university senate respects that.  “

“So number one, bridging that gap, right, between our underrepresented and represented communities on campus. Although this was a goal of mine last year, I obviously still want to continue that, especially coming into a hybrid environment in the fall. I want to do that by incorporating the shared hopes and visions of student organizations and communities on campus through providing them platforms in A.S. initiatives such as Rock the Vote, Aztecs Rock Hunger, as well as Your Voice Matters, as well as expanding the mental health campaign with my executive vice president.”

“Secondly, I definitely want to ensure that equitable transition back into hybrid instruction with activities as well as campus life. Coming back in the fall a lot is unknown. Firstly, I want to work with my VP of university affairs to expand that credit no credit option to both online as well as in person courses for both the fall 2021 as well as the spring 2022 semesters. Our university senate voted on applying this credit no credit option to all COVID semesters, but obviously we don’t know what that definition is when students are back in class and resuming activities. I also want to work with Campus Life, with SLL and also health and wellbeing accessibility to make sure we have those spaces for RSOs and campus communities to reconnect in that safe way, as well as working with the center of student rights and responsibilities to ensure that students are advocated for and that they have that support on their side in cases such as suspension for COVID violations or accusations of academic dishonesty. So that’s it for ensuring equitable transitions back to hybrid instruction, activities and campus life.”

“Lastly, once again touching back. Demanding that the student voice be heard through strengthening shared governance through the implementation of new spaces, positions, and opportunities for students within A.S., not only A.S. but the university senate and the president’s office to ensure that all voices carry that equal weight in deciding what matters.”