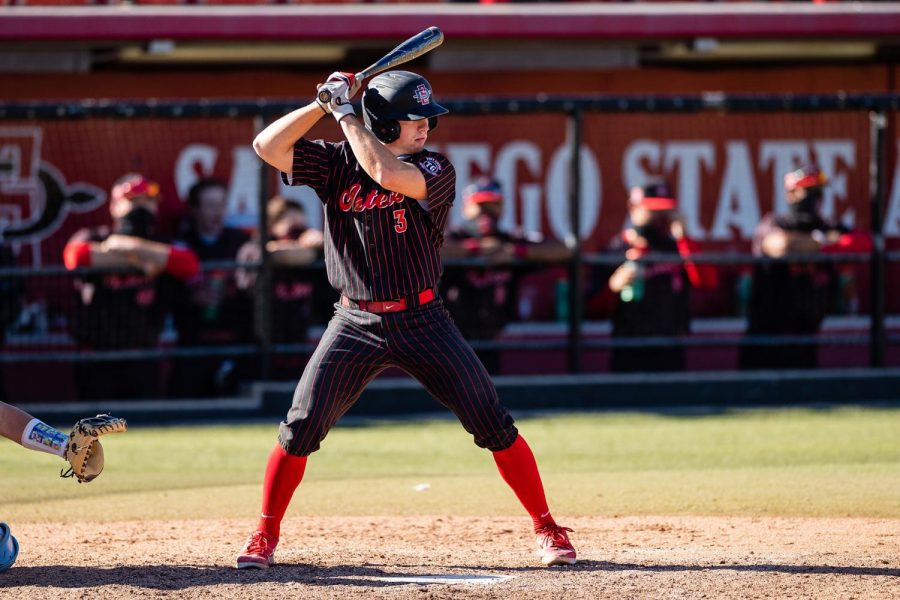 The Aztecs (11-5, 6-3 Mountain West Conference) started off on the right foot, beating the Falcons (7-8, 1-5 MWC) in both games of the Saturday doubleheader. However, the Falcons salvaged game three of the series to avoid a sweep.

Here are three observations from this past weekend’s homestand.

Both SDSU victories in Saturday’s doubleheaders came off the arms of two redshirt sophomore pitchers: Michael Paredes and Troy Melton.

Paredes had his finest start of the season last week against UNLV when he twirled eight shutout innings.

While his scoreless streak broke against the Falcons, Paredes was just as good, if not better.

Taking the mound in game one, Paredes pitched 7.2 innings of two-run ball on five hits and one walk. The outing included a season-high nine strikeouts, eight of them by swings-and-misses.

This marks the fourth-consecutive quality start for Paredes, who continues to display pinpoint accuracy.

Melton rebounded from a so-so performance against the Rebels to completely dominate the Falcons.

The redshirt sophomore matched a season-high with seven innings pitched.

He allowed just one run on five hits while sitting down eight Falcons by way of the K.

After issuing five free passes in his previous start, Melton settled down to walk just one batter in the fourth inning.

The breaking pitches were on-point for both Paredes and Melton, as Air Force batters could only offer awkward swings-and-misses at pitches that dipped outside the strike zone.

San Diego State accumulated a total of 23 runs over the weekend.

Each game of Saturday’s doubleheader yielded nine and five runs apiece, while Sunday’s contest ended with nine for the Scarlet and Black.

This type of offensive production is something the Aztecs have been no stranger to throughout the 2021 season thus far.

Overall, the team has a combined OPS of .826 and a cumulative batting average of .326.

In game one of the weekend series, senior outfielder Matt Rudick went 2-for-3, bringing in two runs alongside redshirt sophomore catcher Wyatt Hendrie.

Redshirt sophomore utility player Brian Leonhardt contributed two of the team’s six RBIs in the first half of the doubleheader.

Game two saw the collection of three Aztec runs in the third inning.

Despite the loss, game three also saw impressive offensive production for the Scarlet and Black.

The team had nine RBIs and was able to put up five of their nine runs in the fifth inning alone.

Hendrie led the team with four RBIs, and hit the game’s only homerun in the bottom of the third.

The team dished out a series batting average of .296.

3. Inconsistencies within the Aztecs’ bullpen

The Aztecs are still searching for their go-to Sunday starter.

In Sunday’s game against Air Force, the team went through 8 pitchers.

Head coach Mark Martinez shared that the bullpen has been a focal point throughout their practices and a work in progress as they continue to improve.

While Paredes and Melton are able to hold it down on weekly double-headers, the team has yet to find a solid starter to close out each weekend series on Sundays.

For the first time this season, SDSU will be leaving San Diego as they travel to San José for a three-game set with the San José Spartans. The series will begin with a doubleheader on Saturday, March 27.