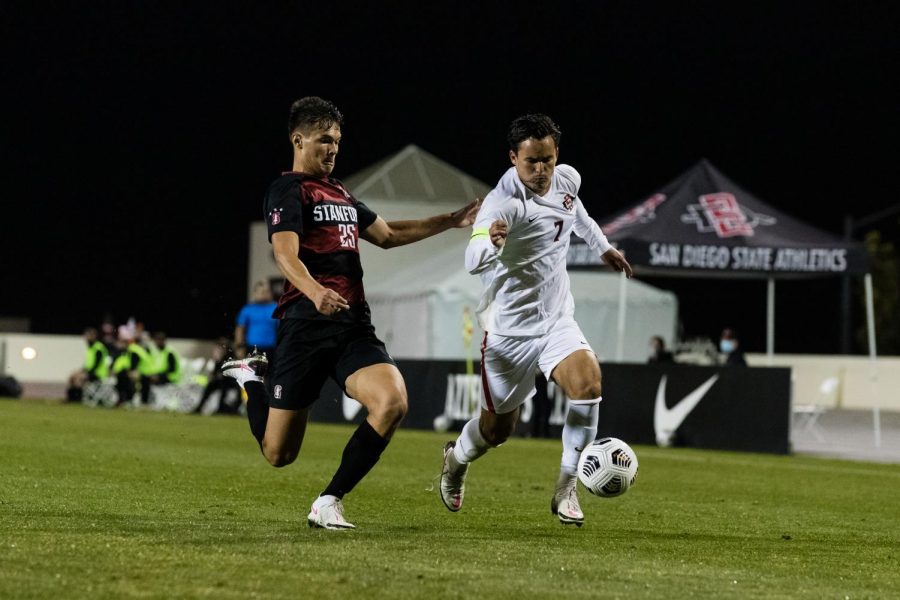 San Diego State men's soccer junior midfielder Laukoa Santos races against a Stanford defender during the Aztecs' 1-0 loss to the Cardinal on Feb. 27, 2021 at the SDSU Sports Deck.

San Diego State men’s soccer fell to No. 4 Oregon State 5-0 on a rainy Saturday afternoon on March 20 in Corvallis, Oregon.

Oregon State is one of the many top ten teams the Aztecs (0-4-1) have faced in their last four matches.

The Beavers (4-1-0) occupied a 17-10 shot advantage and also held a 7-3 advantage in shots on frame. This is the first time this season that SDSU has been shut out or lost by more than one goal.

The first goal of the match came in the ninth minute when the Beavers senior winger Joel Walker created a play down the right side of the pitch to cross it down the middle of the box to junior forward Gloire Amanda, who touched it to his preferred left foot and took a low shot to put it past SDSU goalkeeper Tetsuya Kadono.

Oregon State’s second goal came off a penalty kick caused by an Aztecs’ handball inside the box in the 31st minute. Beavers forward Tsiki Ntsabeleng was the player to convert the PK to make it 2-0. The goal marks the second game this season in which the Aztecs were called on a handball inside their own box.

The Beavers’ third goal came off another penalty kick in the 50th minute, which was taken by Amanda, who made it 3-0 for his second goal of the game and his 11th goal of the year, making him the leading goalscorer in the nation.

Three minutes later, Oregon State extended its lead when freshman defender Gael Gibert managed to header a ball into the back of the net from a cross by midfielder Adrian Crespo making it 4-0.

The final goal from the Beavers came in the 71st minute from sophomore midfielder Javier Armas from an assist from Amanda to put OSU ahead 5-0.

This is the fourth consecutive game the Aztecs have lost.

The Scarlet and Black return to the SDSU Sports Deck on March 24 to host UCLA.