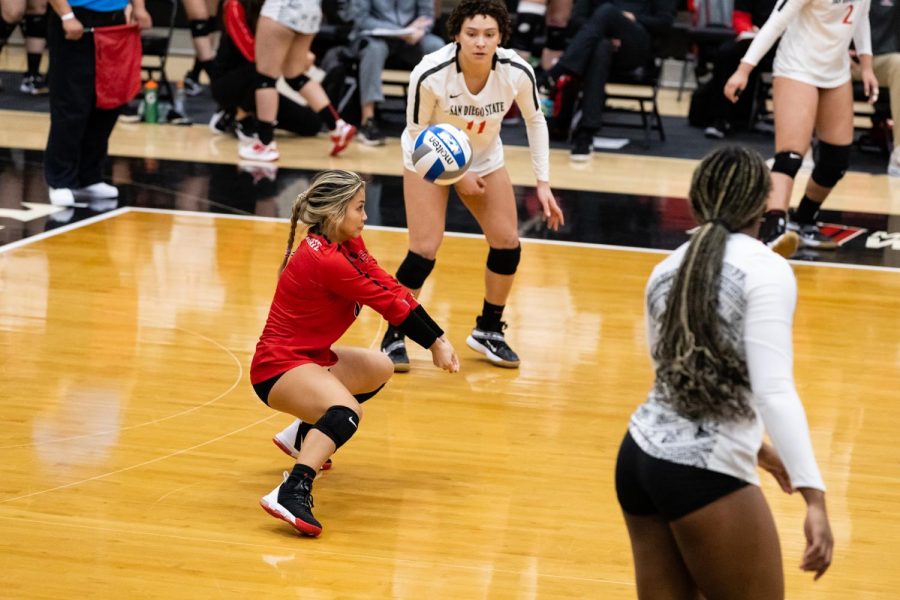 San Diego State volleyball had a tough match set up for it on March 20 as it entered Bronco Gym to play Boise State, who was on a four-game winning streak and had an undefeated home record. But after a close match, SDSU broke Boise’s streaks and came out on top, 3-2.

SDSU took early leads and was able to hang on to them, including a pivotal moment in the fifth set where the Aztecs went on a five-point run to get a 9-4 lead. While Boise chipped away at the lead and tied it at 13-13, a service error by the Broncos followed by a huge block by freshman outside hitter Heipua Tautua’a and senior right-side hitter Erin Gillcrist to win the set and the game.

“We’ve had our ups and downs and probably more downs than ups, so to be able to take down a team at their home place — where I think they’re undefeated — and they’re pretty high-ranked in the conference, it feels like we’re on the right track,” Hilliard said. “We have some players who are starting to develop to the point where I feel like they are close to competing to the top of the conference.”

Here are three observations from the match.

The Aztecs came up with blocks to shut down the Broncos’ offense — an area where Hilliard said the team needed improvement.

Blocks were not the only thing that helped the Aztecs’ defense. Senior defense specialist/libero Lauren Lee posted a career-high 36 digs, as well as tying her season-high of four assists.

Hilliard praised Lee for her performance.

“I saw the stats after the match, and only knew the sense that I knew she was digging a lot of balls but you just don’t see too many stat lines like that,” Hilliard said. “It was really impressive, I’m really happy for her. She deserves it, she’s worked hard all year and it really paid off to where she was gobbling up anything that they would hit in her section of the court and more.”

Lee’s efforts earned her the title of Mountain West Defensive Player of the Week, which is the first honor received by SDSU this season.

2. Hitting on all cylinders

The Aztecs outhit the Broncos, posting a .236 hitting percentage versus Boise’s .157.

Two hitters who stood out were O’Sullivan and sophomore outside hitter Nya Blair, who made up a majority of the Aztecs’ kills.

Hilliard said it was great having both of them play well at the same time.

“We’ve been a team all year where it seems like one or two people have good games and then the other two hitters do not, and we’ve never been on the same page,” Hilliard said. “So maybe Tori would have a good night but Nya wouldn’t and reverse that, so I think that was one of the first games where both were hitting on all cylinders and playing really well and attacking extremely aggressively, and really, really made it look good.”

Blair led the team with a season-high of 18 kills, followed by O’Sullivan with 15 kills. Tautua’a also recorded double digits with 14 kills.

Even players who usually are not involved with attacking contributed.

3. Serving when it counts

Crucial points were earned off of several service errors by both teams along with service aces in key points within sets.

SDSU and Boise State tied in service errors with 10 each. Boise had the edge on aces, posting nine aces versus the Aztecs’ eight.

However, the timing of the aces mattered.

During SDSU’s five-point run in the fifth set, Tautua’a dished out powerful serves that the Broncos had a difficult time dealing with. The 6-foot-1 freshman had six service errors coming into the fifth set but was still able to step up to record two aces.

Hilliard said even though serving can be inconsistent, getting points off serves at the right time is what matters.

“Sometimes it flows and sometimes it doesn’t,” Hilliard said. “But (Tautua’a) came up big when it really mattered and that’s usually what happens in a close match. It’s not how many you miss, it’s when you miss them or when you make them.”

The Aztecs will hit the road to meet San José State on Saturday, March 27 at 2 p.m.

Hilliard said he is aiming for the team to finish better than they did last year.

“We’re sitting at 5-8 and now you’ve just won two in a row and come off a road win, which is very impressive,” Hilliard said. “I feel like we have these goals throughout the year and one thing we’ve been preaching lately is we like to kind of finish better than before, keep the program moving forward. And we have that ability moving forward.”