Inside The Tape: Doja Cat goes back to the “Streets” in latest music video 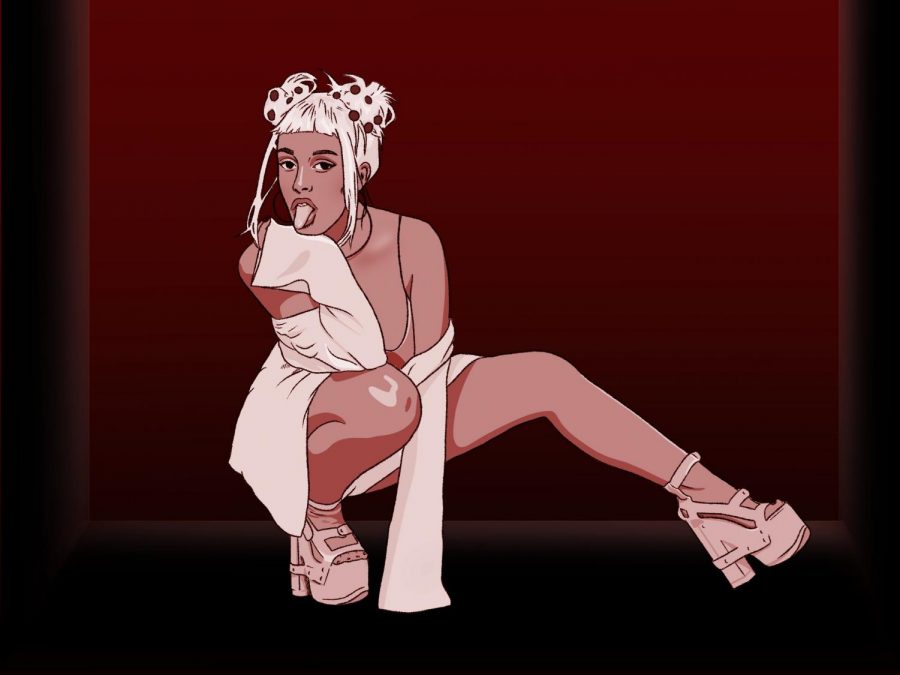 The song initially gained popularity on social media app TikTok, where users turned it into a dance trend.

This new music video, which was released on Youtube, accentuates women’s empowerment in a previously male-dominated society, and strikes back at the popularized phrase: “She belongs to the streets.”

Within the video, Doja Cat captivates, seduces and captures a man. Throughout the scenes, it becomes evident this man wasn’t the first. In the end, Doja returns to the streets, defying the misogynistic implications behind the phrase.

The phrase “She belongs to the streets” is another way of labeling a woman as promiscuous. It’s a manner of saying that a woman who is overtly sexual is unsuited to be a girlfriend or wife and she belongs elsewhere. In her music video, Doja owns the streets and in the end, she goes back for more.

The opening scene is set at night on a busy street. A taxi driver is stuck in traffic when a mannequin in a well-lit display window catches his eye. Doja is the mannequin, dressed in a modest black gown. Once she catches his attention she comes to life and the light in the display window transforms to a crimson red. Doja’s now in lingerie and all that’s seen through the glass window is her silhouette.

The red lighting and Doja’s lingerie are strikingly similar to the concept of the windows of the Red Light District in Amsterdam. According to the magazine Traveller and Senay Botaz, the place is famous for its red-light windows, where prostitutes stand to be stared at by pedestrians who often pay for their services.

Whether or not the similarity in the design was on purpose, there’s no doubt that Doja is alluding to her sexuality in the scene just as the women in the Red Light District do.

The taxi driver is now in the display window with her as she dances for him. Well actually, on him. Flames ignite the transformation to the next scene where Doja is surrounded by zombie-like men who crawl out of the ground for her. With their mouths agape and eyes glazed, they appear to be under her spell. The taxi driver makes his way out of the crowd to approach Doja. He’s captured once again, this time by her web. Yes, a web. Doja, now a spider, crawls all over him as he still appears to be captivated by her.

According to JSTOR Daily and James MacDonald, a spider’s web is meant to attract prey, not capture them. Doja evidently worked to attract the attention of the taxi driver before she caught him in her web. She’s a pro at this.

The scene is altered again. This time, she is in a home dressed as a housewife with her head resting on the taxi driver’s (presumably her husband’s) lap. This scene defies the long-held notion of the phrase, “She belongs to the streets.” In opposition to the implications, Doja is capable of being a wife and living a domestic life. She was able to obtain a home and a loving husband. Although it’s what she thought she wanted, she’s still dissatisfied. She realizes this lifestyle isn’t what she truly desires. The scene explodes into flames as it changes once more.

In a twist, the taxi driver is back to where he started, in traffic. This time he’s the cause of the traffic. Having been distracted by the mannequin in the display window, he held up the cars behind him. Doja is a cab rider in the backseat. She gets his attention, telling him he’s causing traffic. She tells him “I have somewhere to be.” He apologizes and they drive off.

The misogynistic suggestions behind the phrase “She belongs to the streets,” are obsolete after Doja’s music video. The phrase implies that women who are overtly sexual should be filled with shame. Doja is confident as she projects her sensuality to the world. While doing so, she implies that she’s capable of owning the streets and obtaining whatever man she so desires.

The video gained a lot of popularity, accumulating 24 million views within a week of its release. Many fans were raving at the fact that she incorporated a TikTok version of the song and the Tiktok silhouette challenge in the opening scene. Her fans in the YouTube comments praised her for incorporating her fans into her work.

In all, “Streets” is an example of how a dance trend on social media can become an influence over an artist’s music as a whole.