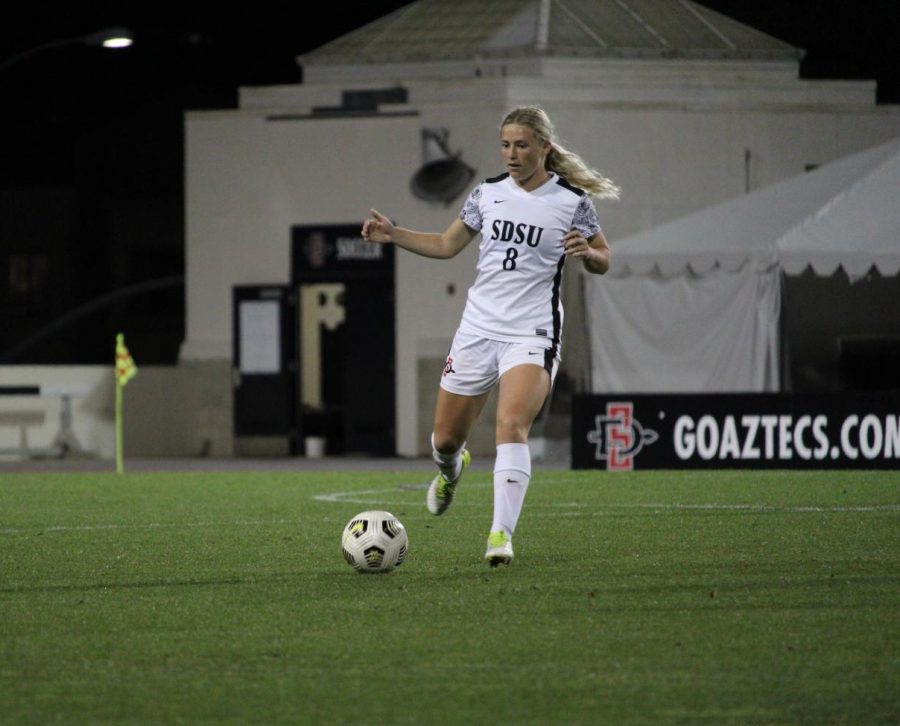 When San Diego State women’s soccer suffered its first loss of the season to Fresno State on March 14, the Bulldogs scored two goals late in the second half to seal the lead.

In the March 27 rematch at the SDSU Sports Deck, the game was a flip of the exact same script.

The Aztecs, fueled by two second-half goals from junior midfielder Anna Toohey and senior midfielder Chloe Frisch, beat the Bulldogs 2-1 for their fifth win of the season.

The match started similarly to the first one in Fresno. SDSU – the second-leading scoring team in the Mountain West Conference – was shutout for the entire first half. The Aztecs also committed five fouls and were not able to create many goal scoring opportunities on offense.

In the 15th minute, Fresno State senior defender Robyn McCarthy passed the ball to senior forward Kassandra Ceja for a goal, giving them a 1-0 lead heading into halftime.

Part of the Bulldogs’ game plan against SDSU was to close off the middle of the field to prevent attacking opportunities, and it worked. The Aztecs only had a one-shot advantage, and two corner kick opportunities during the  first half.

Friesen said the team practiced for that tactic all week but felt they were not executing it well enough at the beginning of the game.

“I thought in the first half we were just impatient,” he said. “We get there, won’t go quick enough to change point of attack, and then try and force it through the middle. We had a lot of possession and were on the edge of creating chances but they weren’t creating quality chances because we weren’t following our game plan.”

In the second half, however, the Aztecs were able to turn the pace of the game to their advantage.

At the 63rd minute, SDSU was able to finally capitalize on offense when Phoebe Leitch whipped a ball to the left side for a Toohey shot. It missed, but it forced Fresno State’s goalkeeper to go off her line. Frisch ran inside and fired a shot from the left side to tie the game.

The Solana Beach native said she knew Fresno State would try and prevent her from working the ball in the midfield, so she focused on finding those opportunities around the outside of the defense.

“I kept hearing (opposing players) say ‘Get on number eight!’ and I just felt like we still were finding opportunities to get through their defense but when someone’s screaming ‘getting on number eight,’ you hear that in the back of your head,” Frisch said. “I think we did a really good job of making the most of our opportunities. (Fresno State) would over-commit to me and I could pop off a little gap (in the defense). I think we played through that a little bit.”

Frisch ended up with five shots on the game, two of which were on frame.

That goal was Toohey’s third on the season, and second in the past two games. Her recent emergence on offense has earned her the nickname “Toohey Time” by teammates, coaches and fans.

“I think it’s obviously really exciting,” she said in regard to her nickname. “At the beginning of the season, I was getting a little bit frustrated because I wasn’t getting the goals and the assists that I wanted to. So, I’m very happy being able to sort of step up, get the points in the game and just help contribute more.”

The transfer from North Carolina State ended up with three shots on the night, all of them on goal.

In total, the Aztecs were able to double up on Fresno State by shot totals in the second half – holding an 8-4 advantage – thanks in part to that high pressure forcing more possessions on offense. SDSU finished with a 14-9 advantage in total shots.

Looking ahead, SDSU plays San José State in its final home game of the season on March 28. As the Scarlet and Black match up against the second winless team in conference play, Friesen is hoping to utilize the team’s depth more compared to previous games.

“One thing we’re gonna do is manage the group a little bit,” Friesen said. “The two-game weekends are really difficult. After not playing for so long, we had a lot of minutes on a few players tonight, so we’re gonna have to use a little bit more of our bench on Sunday.”

Friesen also does not expect the Spartans to play like their record indicates and knows that all the pressure and spotlight will be on his team and their performance.

“I think it’s making sure we respond in a way to a win every bit as we would to a loss where we have to come back and play with energy,” he said. “We want to make sure that at home, we’re dominant.”

The game kicks off at 12 p.m. at the SDSU Sports Deck.