Men’s soccer holds on for 2-2 draw with UCLA 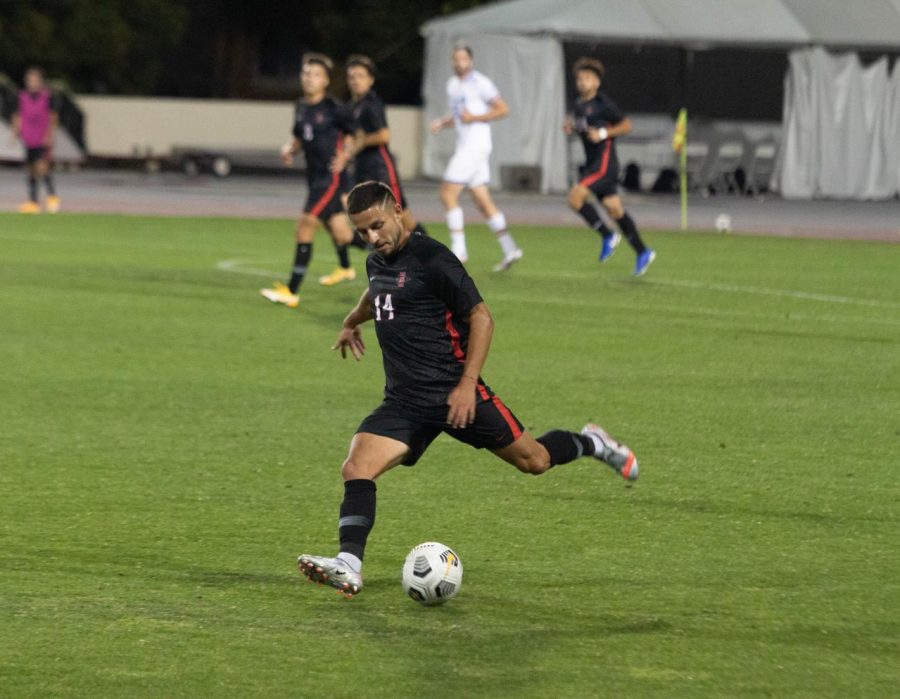 San Diego State men’s soccer tied UCLA 2-2 on Wednesday night at the SDSU Sports Deck. This was the Aztecs’ (0-4-2) second  tie against the Bruins this season (1-5-2).

The Scarlet and Black got out to an early 2-0 lead after 30 minutes, but UCLA kept knocking on the door and were able to draw level after two of its 25 shots found the back of the net.

UCLA outshot the Aztecs 25-9 for the game and had to work hard to get balls past SDSU sophomore goalkeeper Tetsuya Kadono, who had a career-high 9 saves. The tying goal came in the 79th minute when UCLA freshman defender Tommy Silva’s cross found junior forward Kevin Diaz’s head. Diaz rose above the SDSU defenders and headed the ball just past Kadono’s outstretched arm.

The Scarlet and Black took only three minutes to get on the board when freshman midfielder Iñigo Villaldea scored on a free kick from 25 yards out. This prompted a celebration from the entire Aztecs bench as Villaldea ran over to the sidelines to be embraced by his teammates.

Shortly after in the 4th minute, UCLA had an opportunity from a free kick 23 yards away from Kadono’s goal. UCLA’s Silva took the freekick and it looked good until Kadono made a leaping save to stop the ball from going in the top right corner.

Off of the ensuing corner kick, junior defender Reagan Sherlock brought down a UCLA player in the penalty box and the Bruins were awarded a penalty kick. UCLA sophomore midfielder Riley Ferch stepped up to take the kick and his attempt was saved as Kadono guessed the right way and got a strong hand to the ball to keep it out of the Aztecs’ net. \

For the following 25 minutes, the Bruins and the Aztecs exchanged opportunities but neither team was able to find the back of the net.

That changed in the 30th minute, when sophomore midfielder Blake Bowen won the ball off of a UCLA defender with a hard tackle and found the delayed run of freshman midfielder Andre Ochoa. After a couple of touches, Ochoa took a right-footed shot from 20 yards out that beat UCLA junior goalkeeper Justin Garces to the top left corner.

“I was open and I called for the ball, and (Bowen) looked up and played me,” Ochoa said of the lead-up to his goal. “I took kind of a bad touch but I looked up and had a clear shot. So I went for it, and it went in the back of the net.”

UCLA was able to get one back before halftime in the 39th minute off a corner kick when Silva rose above the Aztecs’ defense to head in the Bruins’ first goal and give UCLA some momentum going into halftime.

At halftime, SDSU head coach Ryan Hopkins changed his formation and decided to add an extra defender to help the Aztecs protect their lead and adjust to injuries and cramps his side were plagued with.

“It’s something I had been kind of drawing up since Oregon State,” Hopkins said of the formation change at halftime. “The guys executed it really well, we went over it in training so they were prepared for it when we made the switch at halftime. It’s harder in that formation to create chances and I think if we don’t give up that first goal we win the game. Maybe I should have gone to it a little bit earlier in the first half.”

The change in formation led to UCLA outshooting the Aztecs 16-3 after halftime and drawing good saves out of Kadono to keep the Scarlet and Black in the game.

UCLA got its equalizer in the 79th minute when Silva’s corner kick was cleared back to him. The re-cross found Diaz in the crowded penalty area before he headed the ball past Kadono.

In the 20-minute overtime period, the Aztecs and UCLA each had their chances.

The best chance for either team was when Aztecs senior forward Tevenn Roux got on the end of miscommunication by the UCLA defenders at the halfway line and drove the ball towards the UCLA goal. His shot was too wide of the far post.

“It’s one of those games where it ends up being a draw but feels a little bit more like a loss,” Hopkins said after the game. “We had so many injuries and this time of year everybody, all along the conferences, cramping, muscular injuries, it’s just really really hard. We had to defend a little bit deeper than we normally do because of some of those injuries.”

The goals that the Aztecs conceded on Wednesday all came off of dead ball set pieces.

“Those set pieces have really been our Achilles heel,” Hopkins said. “Our run of play defense has been phenomenal. We just really struggled with the set pieces this year. It’s unfortunate to see two more go in and that’s why it feels more like a loss for me.”

The goals that the Aztecs scored on Wednesday were both scored by promising freshman midfielders in Ochoa and Villaldea. Apart from their goals, the two have put in standout performances at the center of the young Aztecs team.

“Iñigo is a great partner,” Ochoa said of his freshman teammate. “I think we have great chemistry. We’re both composed on the ball and we like to make the right decisions and just slow down the game or speed it up, just keep the tempo and we control the tempo. I think we both played well today.”

Ochoa was named to Top Drawer Soccer’s Freshman best XI preseason team. Ochoa was the only Pac-12 Freshman named to the team.

“Unbelievable player, we’re so thrilled to have him,” Hopkins said of Ochoa. “He’s got such a bright future as a freshman. He’s also just such a good leader for being such a young guy. He’s really actually playing out of position, we’d like to get him closer to goal. But we’ve had some injuries earlier in the year that necessitated him playing a little bit deeper and he volunteered to play there. I can’t say enough about him as a person and as a player.”

Next up for the Aztecs is a matchup against No 4 ranked Washington Huskies on Sunday March 28 at 3:30 p.m. at the SDSU Sports Deck.