Minnie Riperton gave us flowers, it’s time we give her flowers too 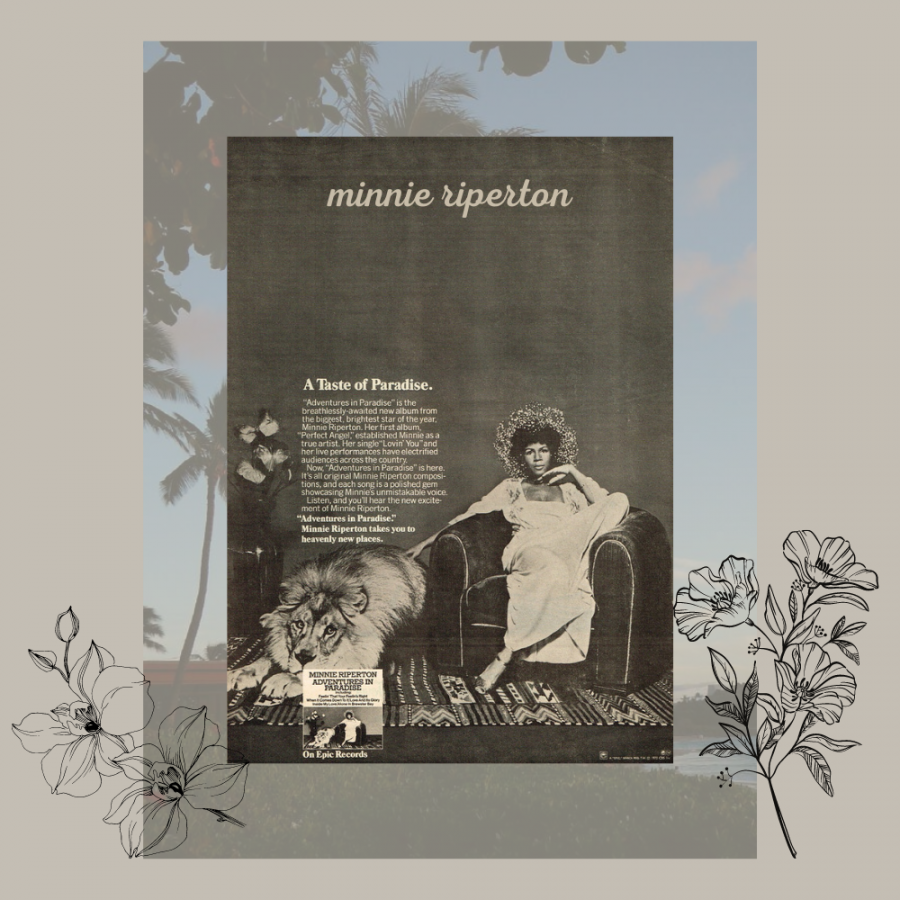 The abundance of music laced with resilient, socially-conscious themes canvassing the mid-1960s through the early 1970s will likely never be matched again.

Even as the counterculture movement waned, many artists stayed resilient in the face of conformity, infusing both peaceful and rebellious features of resistance into their tunes.

Minnie Riperton, who was casually disregarded in all the glitz, glamour and grooviness of this dynamic generation,  compiled one of the briefest, most captivating musical careers ever before tragically passing away from breast cancer at the age of 31.

With a voice described by Stevie Wonder as the “eighth wonder of the world,” she boasted a high pitch that could shatter all the glass in a warehouse and charm a flock of bluebirds like Cinderella. She possessed an enchantment that was reminiscent of Greek myth, much like the alluring voice of sirens. Instead of drawing sailors to their demise, she lured listeners to lush meadows and fields of emerald green.

Growing up in Chicago, Riperton was raised in an arts-oriented family and her musical acumen was quickly recognized. As she pursued singing, she received extensive operatic vocal training. Riperton practiced her classical skillset through the singing of operettas and show tunes along with extensive breathing drills to extend her pitch. However, she deviated from what certainly would’ve been a fruitful career in opera and her attention drifted to the musings of rock, soul and funk.

Her first big break came at age fifteen, as a member of the girl group The Gems. The Gems recorded some original records but they mainly served as background singers under various names mainly Song Three and The Starlets. Through her time with Song Three, Riperton met her mentor Billy Davis, the A&R director for Chess Records and architect behind the sound of artists like Etta James and Jackie Wilson. With his help, Riperton released her first solo singles “Lonely Girl” and “You Gave Me Soul” under the alias Andrea Davis. As Davis, Riperton seized her first chance to unveil a musical ambiance of vibrant lust and sweetness.

After being around the scene at Chess for a while — even working as their office receptionist —  Riperton finally got to take the lead. The modest success of her Andrea Davis singles and Chess’ affinity for her talent landed her a spot as the lead singer of psychedelic soul band Rotary Connection — only this time, it was all under her own name. The criminally underrated band would go on to release five studio albums as a talented orchestral ensemble, performing a mix of expansive new material and imaginative covers of Cream songs and soul’s greatest hits.

While her time with the band wound down, Riperton worked towards her first solo project. In contrast to Rotary Connection’s louder rock-oriented sound, Riperton’s debut album “Come to My Garden” is an agrarian masterpiece, encompassing the harmonious outlook of the Flower Brigade and a grounding partnership with mother earth. Despite its lack of commercial success, “Come to My Garden” is fantastic and a transcendent springtime soundtrack.

Every track on the LP is lovely and serene, but the song that sees Riperton fully blossom into her flowery aura is “Les Fleur.” It’s a majestic, orchestral cacophony that builds from gentle to grand in a matter of moments, culminating in a haunting crescendo signaling the rise of the hippie movement.

Rotary Connection collaborator Charles Stepney produced the entirety of “Come to My Garden” and added an especially delicate touch to this chamber soul ballad. Newer generations have been reintroduced to the song through the works of “Inherent Vice” and “Us,” unleashing the tune in a truly triumphant fashion. Riperton’s powerful vocal instrument embodied the virtue of natural fulfillment as it was proved wondrous and plentiful each time her flowery power was unveiled.

Despite her undeniable brilliance, Riperton faded away from her passion almost as soon as she rose. She found herself raising a family in Florida with her husband, Richard Rudolph when an Epic Records intern helped resurrect her career midway through 1973. Returning with fresh ideas and refined skills, Riperton requested that her next project be produced by Wonder. With Wonder on board under the pseudonym El Tor Negro (to circumvent Motown’s request that he not produce the album), this partnership would result in “Perfect Angel,” Riperton’s second and most successful album in addition to a side project for Motown’s greatest hitmaker, crafted at the height of his classic period.

Although “Come to My Garden” captured Riperton’s bond with an ethereal beauty, “Perfect Angel” is her most eclectic album and contains a little bit of everything. Riperton roamed through psychedelia “Take a Little Trip,” a not-so-subtle reference to LSD, glided over Wonder’s distinct harmonica (“Our Lives”) and shed her flowers for flames on the absolutely rockin’ “Reasons.”

On an album like this, her versatility leaves no question. But no track matches the pristine “Lovin’ You,” a breathtakingly beautiful lullaby, inspired by her infant daughter Maya. The story goes that like many infants, Maya was experiencing restlessness, so Riperton made a soothing tune that would ease her child and give her and her husband some alone time.

“Lovin’ You” may be quaint, but it demands your full attention. It emits a sensation so still, so present, so comforting. Her already angelic voice is accompanied by chirping birds, inviting listeners to a state of remembrance and imagination. A nostalgic semblance of children gathering for a grassy picnic and gazing at the shape of puffy white clouds aligning the sky.

Seriously, try not having some kind of nostalgic childhood flashback while listening to this track.

With the mainstream grasp of this single, Riperton’s career rightfully skyrocketed and she became known as the “lady with the high voice and flowers in her hair.”

The widespread relevance of “Perfect Angel” prompted the releases of three more exceptional albums from the vocalist: “Adventures in Paradise,” “Stay in Love” and “Minnie.” She also enjoyed a plethora of minor hits like “Inside My Love,” “Can You Feel What I’m Saying?” and “Memory Lane,” all of which are worth countless enjoyable listens.

Sadly, her fitting success would be short-lived.

Midway through 1976, Riperton was diagnosed with breast cancer and after undergoing a mastectomy she was given six months to live. Put in this dire situation, Riperton did not relent.

Even after cancer spread to her lymphatic system and her diagnosis became public, she continued to record celestial albums, make stunning collaborations, and tour the world. She became the American Cancer Society’s national spokeswoman and received the organization’s annual Courage Award. Riperton’s talent still warranted live television appearances even when she lost the ability to move her right arm.

After a lengthy battle, and sextupling the time she was given to live in her original assessment, Riperton died on the morning of July 12, 1979, at LA’s Cedars-Sinai Medical Center in the arms of Rudolph. She was survived by her husband Richard and two children: Maya and Marc.

The opening line of Riperton’s most acclaimed song, “Lovin’ you is easy ’cause you’re beautiful,” was chosen to be displayed on her headstone epitaph, to sum up her artistry as well as her spirit. A year later, a posthumous album, “Love Lives Forever,” provided her fans with one last batch of new material, and took its name from a mantra that can rightfully be applied to its artist. Michael Jackson, George Benson, Wonder and other notable musicians took part in this touching tribute.

In many ways, Riperton’s artistry has been carried over into contemporary music.

Her iconic whistle register — the highest register a human voice can hit — is a skill that singers Mariah Carey and Ariana Grande are currently celebrated for. Besides Riperton, few musicians have been able to claim the rare achievement of a five-octave range AND hit the whistle register with such piercing accuracy. But the ones who can, have gone on to historical success (Carey and Whitney Houston).

Hip-hop producers have discovered a sample goldmine in the vaults of Motown and Chess Records and Riperton’s soulful serenades inspired a handful of future classics. Many rap fans have been indirectly introduced to her through the sample-heavy works of A Tribe Called Quest and Black Star. The velvety climax of “Inside My Love” is interpolated in ATCQ’s “Lyrics To Go.” Another Riperton classic, “Baby, This Love I Have,” has many of its parts rearranged in Black Star’s “K.O.S. (Determination)” and another Tribe song, “Check the Rhime.”

Sharing many similarities, Carey herself cites Riperton as a tremendous influence. R&B goddess Solange also credited Riperton as a crucial influence for her 2016 album “A Seat At the Table” because she was able to be evocative while singing about “tough shit.”

Even when it isn’t openly expressed, avid listeners may sense her essence between the notes of modern songs, and Riperton’s affectionate spirit is still active in the minds of many current musicians more than four decades after her death.

Her presence in showbusiness has acquired a new meaning through the work of her once-infant daughter, now known as comedian, actress and Saturday Night Live star Maya Rudolph. Though her fame is attributed to her father’s name, she continues to pay tribute to her mother — and the resemblance is crystal clear.

With a voice that consistently outclassed all the talented company surrounding her, Riperton’s legacy can never be overstated, and though it’s tragic to think about a talent taken too soon, I’m grateful we ever got to hear her.