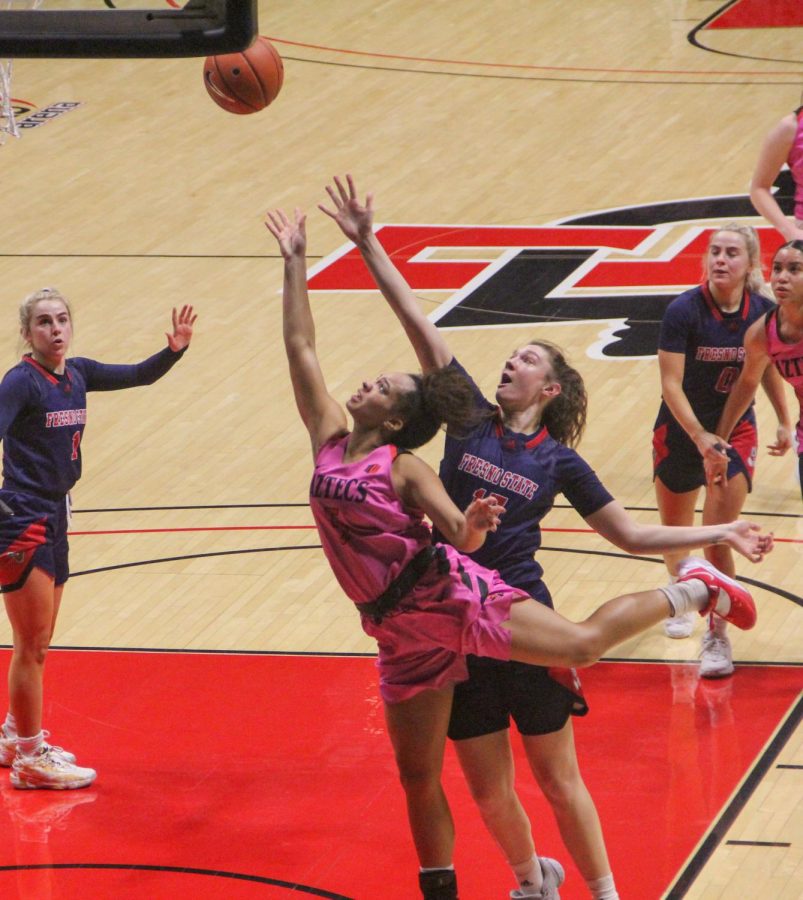 Shortly before on Feb. 21, Adams was honored at her home court in Viejas Arena for the final time during Senior Day festivities. Before the start of the game against Fresno State, a video compilation of Adams’ family and friends wishing her luck played on the jumbotron.

Due to COVID-19 safety regulations, her family was unable to watch her final home game in person.

“It was amazing,” Adams said of being honored during Senior Day. “It’s a bummer that my family couldn’t be here but everyone on the staff and my teammates and support staff made it very special, and my family of course. I’m grateful, I’m very very grateful.”

The Kirkland, Wash. native’s fourth season probably didn’t end the way she envisioned, but Adams leaves SDSU with 9.9 points, 2.5 assists and 3.2 rebounds per game during her collegiate career.

Reflecting on her career, Adams said the women’s basketball program will forever hold a special place in her heart.

“It has completely changed my life forever,” Adams said. “I’ve made memories here with such amazing people that I will hold in my heart forever, and that have changed me for the better. The people here have stood by me for better or for worse so I’m forever grateful and indebted to this program.”

She said that her time in the program has contributed to her development not only as a player but as a person.

“As a player, probably just learning that working hard really does get you places in life,” Adams said. “And as a person, just learning to adapt to hard situations and growing in those.”

Junior guard Sophia Ramos said the thing she will miss the most about Adams is… well, Adams.

Ramos said Adams is always someone to encourage, no matter what kind of day she was having.

Head coach Stacie Terry-Hutson described Adams’ smile on the court as contagious and said that her presence is one of positivity and drive.

“She’s just a great kid,” Terry-Hutson said. “She takes the underclassmen under her wing. She knows what it’s like to be a freshman so she reaches out to those guys. People just gravitate to her because she is just a good human being.

“What I love the most is when we get going, and her energy on the floor. I love seeing her smile,” she added.

In her years at San Diego State, Adams has accumulated over 809 career points — 213 of which have come from the current campaign (including 10.7 PPG).

Although Adams brings an offensive threat in each game she plays, Terry-Hutson said Adams has impacted the SDSU women’s basketball program in more ways than one.

“She has influenced our program in so many ways — not only playing on the floor but helping the chemistry, even to recruiting,” Terry-Hutson said. “She has had her hand in a lot of these recruits who have come after her.”

Since 2018, Adams has ranked in the team’s top three in assists.

She currently leads the Scarlet and Black in the assists category with 74 during the 2020-21 season.

Adams also currently leads the team in steals, having accumulated 27 this year alone.

“She fills the stat sheet every single game,” Terry-Hutson said of Adams’ play.

Adams said her most memorable moment with her team so far had been making it to the Mountain West Conference tournament semifinals during her sophomore season.

Looking forward, Adams plans to either continue her career in basketball internationally or go for her master’s degree.