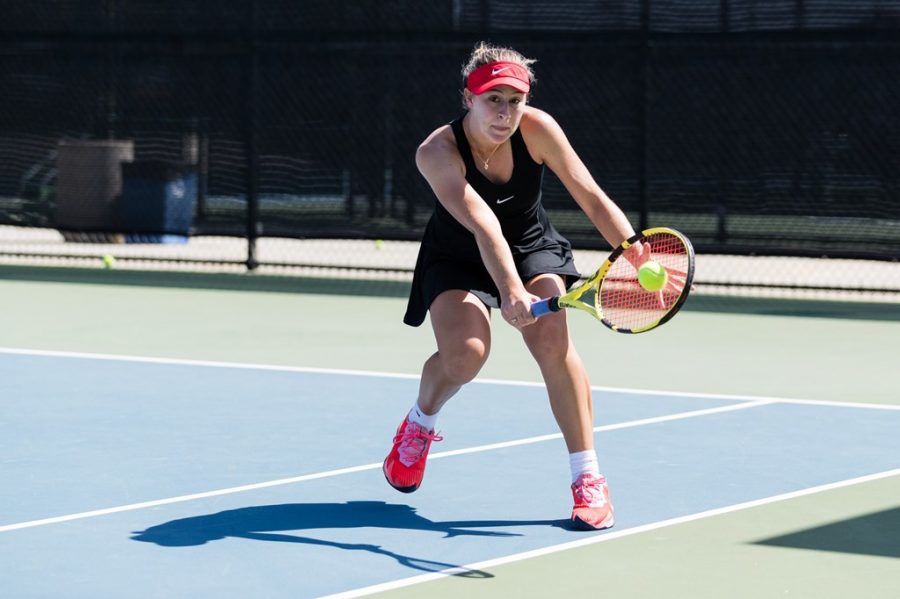 After going 2-2 during the non-conference portion of its schedule following four postponed/canceled games, the San Diego State women’s team began Mountain West Conference play with two games over the weekend.

Despite dropping their first weekend match against Fresno State on Saturday, the Aztecs got right back in the win column by defeating Nevada on Sunday to even their record at 3-3.

Similar to their previous match-up against Oregon, the Aztecs found themselves short-handed as they played with only five student-athletes.

Because of this, SDSU was forced to forfeit their No. 3 doubles match along with the No. 6 singles match.

SDSU was already down by one, but that didn’t stop it from winning both doubles matches to win the overall point.

Junior Regina Pitts and freshman Cecile Morin got the ball rolling on court No. 1 by earning a 7-5 victory over juniors Dalia Ahmed and Deniza Marcinkevica. SDSU senior pair Nnena Nadozie and Abbie Mulbarger finished it off by beating sophomore Carlotta Nonnis Marzano and freshman Carolina Piferi by a 7-5 margin.

However, the FSU bull-rushed through singles play, sweeping all four matches to turn the tide on the Aztecs.

Ahmed got the winning started by defeating Nadozie 6-3, 6-2 on court No. 1 while Alexandria Von Tersch Pohrer had no answers during a 6-1, 6-3 loss to Piferi.

The final loss came from A.C. Hummel, who beat Mulbarger 6-3, 6-2. With the automatic forfeit on court No. 6, FSU completed their comeback against SDSU to win the meet.

The Scarlet and Black wouldn’t have time to recover from their loss as they squared off with Nevada the day after on March 28.

Just like last game, SDSU was playing shorthanded and was again forced to forfeit the No. 3 doubles match and No. 6 singles match.

It seemed like the Aztecs were about to have a repeat of the last game as Pitts and Morin toppled the Wolf Pack duo of sophomores Carla Del Barrio and Anastasia Luneva 6-3.

With both teams tied at one point apiece, all eyes turned to court No. 2, where Nadozie and Mulbarger took on graduate student Milka Genkova and junior Cristina Moll Alles.

As the match concluded, the scoresheet read 6-4 in favor of Genkova and Mol Alles. The win gave Nevada the advantage and, thanks to the SDSU forfeit on court No. 3, the doubles point.

On Saturday, singles were where the Aztecs got swept to lose the match. This time, it was SDSU who brought out the brooms to storm back to victory.

Pitts began the winning by stomping Luneva 6-2, 6-2 on the first court while Mulbarger found similar success against Del Barrio, beating her 6-4, 6-4.

For the first time this season, the Aztecs will leave the Aztec Tennis Center to visit Boise, Idaho for matches against Utah State and Boise State on April 2 and 3.