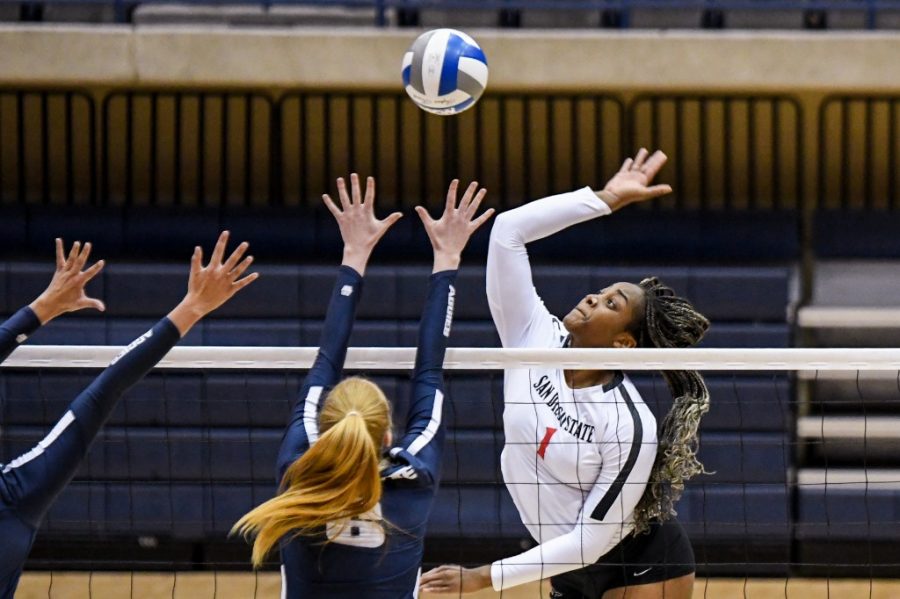 San Diego State volleyball sophomore outside hitter Nya Blair spikes the ball during the Aztecs' 3-2 win over Utah State on March 12, 2021 at Jenny Craig Pavilion on the campus of the University of San Diego.

Coming into the game, the Aztecs (5-9) and Spartans (6-8) were tied for seventh in the Mountain West Conference, but the loss pushed SDSU to eighth.

“It’s sad, but it’s true: volleyball often just comes down to serving and pass,” Hilliard said. “And the fact was, we played Boise State last week and we could pass pretty well, and this week could not pass. It’s hard to really pick apart too much of the match if you can’t pass. And so we just couldn’t get the ball to the setters and that’s why we struggled so much.”

In all three sets, SJSU took quick leads and left the Aztecs trailing.

The first set had the Scarlet and Black tied with the Spartans up until 11-11. Then, SJSU was able to burst ahead and take a lead as big as seven points, with several points coming off of Aztec errors.

The second set was the same story, with the Spartans able to take a big lead right at the beginning of the set. SJSU took a quick 10-5 lead with a seven-point run. The Aztecs were briefly able to tie it up again at 16-16, but the Spartans answered back with a six-point run to win the set.

Hilliard said the key to winning was to slow down SJSU, but the team was never able to achieve that.

“San José State runs a much different style of offense than anybody else in the conference, so it’s very unique,” Hilliard said. “So I told them if they could just find some rhythm and slow them down a little, you’ll eventually catch up, kind of like a fast break team. Usually, it takes a game to catch up to their speed, but unfortunately, we never caught up to it the whole day.”

The third set continued the trend from the previous two sets, with SJSU taking a quick 7-3 lead, leaving the Aztecs to play from behind again. SDSU trailed for the whole set, with the Spartans keeping at least a five-point lead for the entirety of the third set.

SDSU’s struggles showed with a posted .160 hitting percentage versus SJSU’s .372.

No one recorded more than eight kills, as junior outside hitter Victoria O’Sullivan led the Aztecs with eight. However, she also led the team with six attack errors.

That was not the only problem for the Aztecs. In the third set, freshman outside hitter Heipua Tautua’a, who has been one of SDSU’s staple players, was subbed out due to a dislocated thumb. Freshman right-side hitter Gabriella Spaethling came in as a substitute, playing in her second game of the season and not having played since a game against Nevada on Feb. 26.

The injury left SDSU short-handed, and Hilliard said before the match the team was already going into the game down some athletes due to a positive COVID-19 test.

“It was a tough weekend all the way around,” Hilliard said. “24 hours before the match started, we had an athlete test positive and so we didn’t even know we were going to play the match or even fly up to the match. And including (Tautua’a’s) injury, we just couldn’t catch a break, so-to-speak.”

One bright spot for the team, however, was senior right-side hitter Erin Gillcrist’s performance. Gillcrist contributed both offensively and defensively by posting five kills, two service aces and three blocks. Her performance won most of the Aztecs’ points in the second set, allowing the team to keep the set close despite the Spartans’ point runs.

Hilliard commended the 6-foot-1 senior for being one of the team’s more consistent players.

“Erin is a very athletic and dynamic girl,” Hilliard said. “One of the better athletes on our team. When she gets a good set, she’s really able to put some nice pop on the ball and she really does a great job of getting explosive.”

The game against SJSU marked the Aztecs’ final road game of the season. SDSU only has two games left, with its first against Air Force on Thursday, April 1 at Peterson Gym.

Hilliard said he welcomes the season ending for the sake of the players’ well-being, and hopes for everyone to stay healthy until next fall.

“I think it’s a welcome end to the season with the fact that we’re short-handed, and only for that reason,” Hilliard said. “I think we were feeling pretty good about ourselves last weekend when we were at full-strength and now we’re down two better players. When that happens, you’re usually hoping to get some other players some opportunities. See what they can provide as they move towards a very shortened off-season, and see if they can take that into the upcoming fall season.

“I would hope that’s how they would use this opportunity to play these last two matches. Obviously, for the standings it doesn’t mean a whole lot, so we’re just trying to make sure we finish the season as healthy as possible. And also see if we can find some sparks. Mainly, a lot of the freshmen, too, make sure they get that full spring season of play so they can be ready for the fall.”