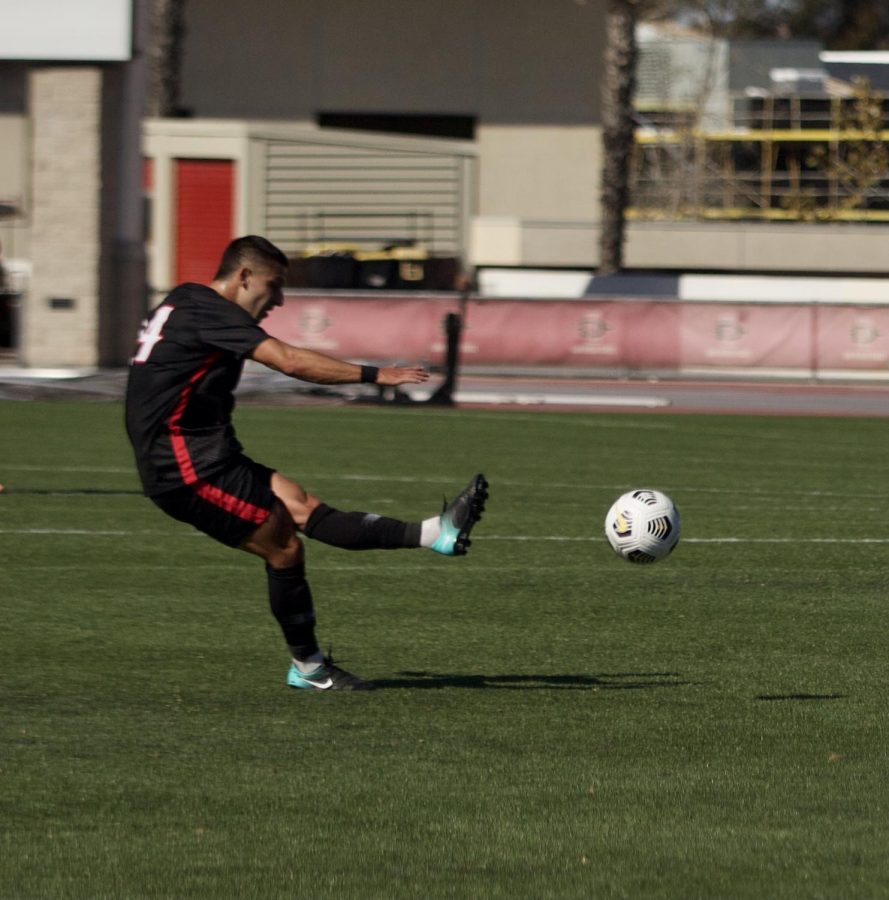 San Diego State men's soccer junior midfielder Tristan Weber scores off a free-kick to give San Diego State a 1-0 lead in the 24th minute. The Aztecs defeated No. 4 Washington 2-0 on March 28, 2021 at the SDSU Sports Deck.

San Diego State men’s soccer got its first win of the season Sunday evening when it beat No. 4 Washington (8-2) at the SDSU Sports Deck. The 2-0 win was SDSU head coach Ryan Hopkins’ first win at the helm.

The Aztecs (1-4-2) got two goals in the first half from junior midfielder Tristan Weber and sophomore forward Austin Wehner. Sophomore goalkeeper Tetsuya Kadono had another impressive performance with eight saves and earned his first shutout of the season.

The first goal of the game came in the 24th minute when Weber capitalized on a free-kick from 30 yards out. His left-footed shot got over the wall and was able to dip underneath the crossbar and hit the back of the net. Washington sophomore goalkeeper Sam Fowler dove at the ball but he never had a chance.

The Aztecs got their second goal of the match in the 36th minute. The play started with a Washington free-kick towards the sideline. The ball was crossed in the Aztecs’ box and Kadono came out strong and met the ball with his fist to clear it away.

The ball then made its way to freshman midfielder Andre Ochoa, who found the run of Wehner and he was able to slot the ball just inside the left post to put the Aztecs ahead 2-0 for Wehner’s first goal of the season.

“Andre, he saw me, he had the vision and I ended up putting myself in a good position,” Wehner said of the build-up to his goal. “I saw that the keeper was cheating a little bit near-post and just took that opportunity to slot it in the far post. It feels amazing to get that first goal under my belt.

“I thought he (Chavez) was excellent today in the game,” SDSU head coach Hopkins said. “He won a ton of balls in there and really helped shield the backline. I thought Fritz was phenomenal today, Elias next to him, I thought they were really, really good today.”

The Aztecs came out of halftime with the same formation and four defenders, compared to last week when Hopkins made the switch to five defenders.

“I felt like it’s a little different game, we felt like the guys had a little more in the tank,” Hopkins said of keeping the first-half formation. “We just felt like we could continue our press, really disrupt them from getting into a good rhythm.”

In the second half, the Aztecs were able to come out and continue to look like the same team they were in the first half. There was no second-half dip the team had experienced in other games.

The Scarlet and Black’s biggest concern was set pieces and if they could stay organized enough to defend set pieces. The Aztecs have only conceded six goals from the run of play this season and 9 goals from set pieces.

Kadono’s commanding presence on set pieces made the difference in this game. He was aggressive in the air and was able to get a hand on nearly every ball he went for. The defense stayed organized and when the ball got to the back post, it was covered by an Aztec defender.

The Aztecs were outshot by the Huskies 16-2 in the second half, with a majority of the chances coming in the last 10 minutes. Kadono had to be sharp and responded to the challenge coming up with three saves in the last five minutes to keep the Huskies out of his net.

“I’m super confident,” Kadono said of his current form. “Wednesday’s UCLA game gave me a lot of confidence boost and it showed up here again.”

The last time the Aztecs faced Washington on March 6 they had the lead until Washington equalized in the 89th minute and found the winner after one minute played in the overtime period.

“I think we remember that feeling of what it was like to have that lead and then get it taken away from us,” Wehner said. “So to be able come back and get that second chance and just be able to execute what we talked about and put together a full 90 minutes, it’s a great feeling and it’s very satisfying.”

Despite the Aztecs getting their first win this late in the year, there is still optimism that the team has a chance to make a run at the postseason. For SDSU, there are three games remaining, and two of those come against top-10 nationally-ranked opponents in Stanford and Oregon State.

“We’re really excited — this year you can be under .500 and make it,” Hopkins said. “If you get three top-10 wins and finish strong we could sneak up close to .500 and I think we have a pretty interesting argument for sure.”

The Aztecs’ next game is Saturday, April 3 when they travel to Palo Alto, Calif. to face No. 6 Stanford. The game can be viewed on the Pac-12 network.