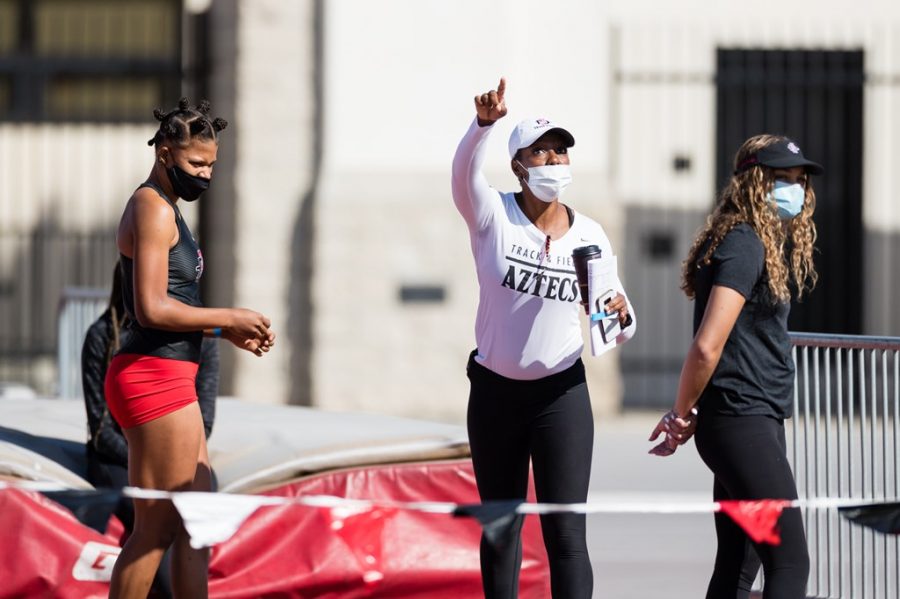 San Diego State track and field head coach Shelia Burrell (middle) gives out instructions during the Aztecs' second-place finish at the Aztec Invitational in a dual meet versus Utah on Feb. 25, 2021 at the Aztrack Sports Deck.

The Aztec Invitational concluded last Saturday at the Aztrack Sports Deck, where the San Diego State track and field team finished second with 115.50 points just behind Southern California’s 117 points and ahead of third-place Oregon’s 112.

SDSU senior hurdler Maya Brosch was the only Aztec athlete to place first in an event. She won the 400-meter hurdles with a time of 58.74, marking a personal record and the ninth-fastest time ever run by an Aztec.

Brosch’s impressive win earned her the Mountain West Track Athlete of the Week honors on Tuesday.. She holds the top time in the conference for the season and holds the 16th-fastest time in the nation.

“Every race can’t be perfect and this last weekend basically feels like it was,” Brosch said of her race. “Every hurdle was good. Everything that I wanted to happen happened.”

She still wants to improve and isn’t going to settle with her new PR, but strives to get faster.

“I don’t want to get myself too excited,” Brosch said. “I expect more from myself and when I was running that meet I definitely feel like I have more in me, but not getting excited about the fact that I did really well.”

Another standout performance came from junior thrower Jordyn Bryant. She placed second in the discus with a throw of 172-5 (52.56m), a PR and the eighth-best throw in school history. To go along with that performance she also placed third in the shot put with a throw of 49-05.00 (15.06m).

Her performance in the discus also earned her the top spot in the Mountain West and the 25th-best throw in the nation.

“I don’t want to say I was surprised, but for me throwing discus, I don’t always look at where it lands,” Bryant said. “My throw this weekend was a result of how hard I’ve been training. I have more work to put in and I just know I’m on the right path.”

The Aztecs get a chance to compete against members of their conference in the team’s next meet. The message from head coach Shelia Burrell to her athletes is this has all been preparation for their conference.

“She (coach Burrell) tells us we need to get to conference. We need to prove to everybody else that we are more than they perceive us to be,” Bryant said. “That we can compete at any level and still get our best.”

The Aztecs got second and third in the long jump with the jumps of junior Vanessa Spizewski (18-8.00) and junior Sara Absten (18-6.00)

Next up for the Aztecs is the Mountain West Challenge on Wednesday, April 7 at the Aztrack Sports Deck.