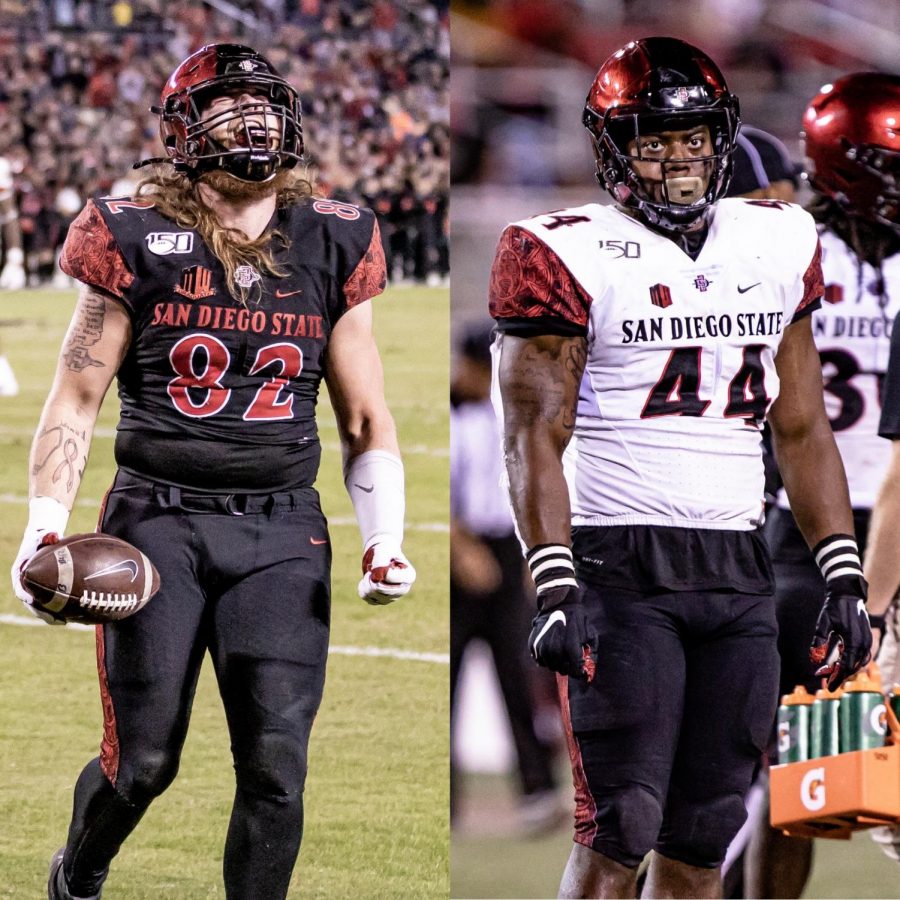 San Diego State football returned two former players to the practice field on Thursday with hopes of getting a second chance to pursue the opportunity of playing professional football in the NFL.

The last time tight end Parker Houston and linebacker Kyahva Tezino put on the San Diego State football uniform was a 13-3 win over BYU at SDCCU Stadium in November 2019.

As they closed one chapter of the book with their college football careers, they hoped to open a new one as they set their sights on achieving their dreams of playing professionally in the NFL.

A lot has changed since then. In some ways, it’s more change than they could ever imagine.

The 2020 NFL Draft went virtual for the first time ever, SDSU’s Pro Day was completely canceled and now the stadium they spent nearly every Saturday in is nothing more than a pile or rubble.

“It’s kind of crazy because you’re driving on the freeway you kind of look and see where that stadium is, and now you see kind of through it,” Tezino said. “It’s like, ‘Wow.’ It’s kind of difficult because I played all five years in my time being here in there. So it’s just like, I guess putting that stadium to rest now.”

SDSU’s Pro Day was scheduled to take place on March 27 last year. As the COVID-19 pandemic caused shutdowns, many schools canceled their pro days and the NFL began restricting travel for coaches and scouts.

After enduring their fair share of change, cancellations and hardships, Tezino and Houston never lost sight of their goals. Instead of giving up, they continued to train and work even harder to be ready when an opportunity would arise.

Similarly, Houston was cut from the Cardinals on July 26.

Both now look for a second chance to be looked at by NFL scouts and coaches. This opportunity came on March 25 when San Diego State had the opportunity to host their own Pro Day, where the two were able to participate.

“You’ve just got to keep your name popular in this kind of business,” Tezino said. “I was out for a year, I would say, even though I was having tryouts here and there and on different teams. But after a while, I wasn’t on a team and I was just sitting at home for a couple months. I did Pro Day to just keep my name popular, keep my name out there and just to put up some numbers because I didn’t put up any last year and just to be able to stay fresh in their eyes.”

Pro Day is a chance for players to showcase their skills in the five main events that typically take place at the NFL Combine. Each participates in the 40-yard dash, the vertical jump, the shuttle run, the bench press and the broad jump.

After taking part in all events, Tezino feels he gave it his all and said he will now sit back and wait to see if he’ll receive any calls.

“I thought that it went very good,” Tezino said. “I’m not positive how I did in their eyes, but I mean, in my eyes I felt like I did good. I gave everything I had, so I can live with that.”

Despite a year of not having many opportunities, Houston feels he did the best that he could and is thankful for the opportunity to return to the campus that made him into the player he is today.

“I think I did okay,” Houston said. “There’s always room for improvement in every aspect you do, but it was good to be back out here in San Diego. Good to be back on this campus and back on that field.”

“I’m hoping they just kind of look at you know, he’s had a whole other year of not playing football to keep his body healthy and to be able to develop himself,” Houston said. “So that’s really what I’m hoping teams will look at, given our opportunities and whatnot.”

Both Tezino and Houston spent time experiencing what it’s like to practice with an NFL program. If they receive calls, they’ll both enter the process for a second time already knowing a portion of what’s expected of them.

“Being with the Cardinals for a little bit last year definitely allowed me to gain some experience of what it’s like in an NFL locker room, what it’s like at an NFL program,” Houston said. “You learn the ropes of it, and you kind of learn how to be a professional athlete.”

As both of the former Aztecs look ahead to the future, it’s still hard for them to reflect on this past year and how COVID-19 affected some of their opportunities. Houston said he remembers how tough it was to experience the pain of last year’s pro-day opportunity being taken away.

“It not only hurts your opportunity, it hurts you on the inside,” Houston said. “I mean we worked so hard for that one day and to give us that one opportunity. To have it all taken away really sucked.”

Houston and Tezino jumped at the opportunity to participate in SDSU’s Pro Day in hopes of keeping their name in the running as a whole new draft class also enters consideration.

The NFL New League Year began on March 17 making both Houston and Tezino eligible to sign with a new team. They’re in a different position this year as they are no longer eligible for the actual NFL Draft, however, they will continue to train in hopes of earning a roster spot.