Softball takes one, drops two against UNLV at home 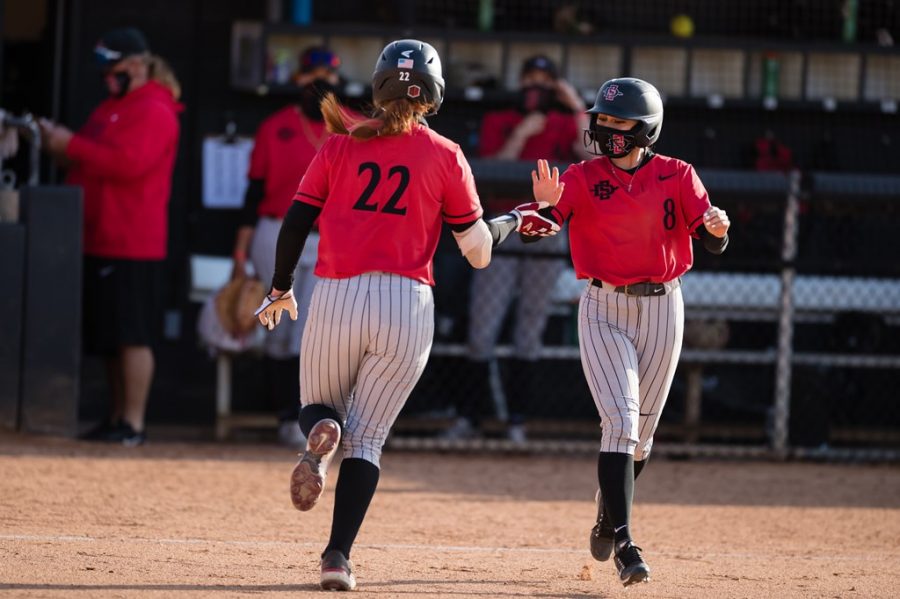 San Diego State softball battled the University of Nevada, Las Vegas at SDSU Softball Stadium in a three-game series featuring a back-to-back on March 27 and a single game on March 28.

The Aztecs came into the series on a two-game losing streak after dropping the last two games in their series last weekend against Nevada.

Despite losing the series, the Aztecs sent two games to extra innings and refused to go down without a fight.

“If anything is important right now, it’s going to be getting our offense going,” Van Wyk said. “You don’t even see 1-0 ball games in our game anymore.”

The Aztecs lost the first game of the series 1-0 but despite not scoring, their defense provided a glimmer of hope.

“Our pitching and defense seems to be doing a decent job and we’ve just got to get our hitters believing in themselves and coming through,” Van Wyk said.

Both teams opened up the series with a defensive masterclass, holding each other to under five hits Saturday afternoon.

Despite holding UNLV to three hits — two less than the number of hits the Aztecs were held at — the Aztecs couldn’t find a breakthrough as they were held to zero runs.

The Runnin’ Rebels’ defense proved too tough to penetrate after completing no errors while maintaining a 64.6% strike percentage.

Junior catcher Julia Vollmer, senior first baseman Mia Trejo, and sophomore outfielder Maddie Schmidt of UNLV each recorded a hit with senior second baseman Justine Federe scoring the all-important run in the 4th inning to give the Rebels the 1-0 win.

Despite the tough night out, SDSU junior utility player Riley Thies led the game in hits with two, as her teammates sophomore catcher Sara Lillie, junior outfielder Alexa Schultz and senior shortstop Shelby Thompson trailed her with one each.

Thies would prove to be a very important player for the Aztecs throughout this series, leading the team in batting average at .347. Theis recently gained a position in the starting lineup as senior outfielder Jenna Holcomb has been unavailable with a neck injury. Thies has made the most of her opportunity with two hits in three of her last four games.

“Having my team really excited for me has helped me a lot,” Thies said.

Van Wyk echoed that same sentiment and said Thies brought a sense of energy to the team.

“Riley was on base every time we turned around whether it was a hit, error, or walk,” Van Wyk said. “She was a real spark for everybody.”

This time, it also went to extra innings.

Aztecs’ Thompson ran in the winner in the bottom of the 10th inning after junior utility player Danielle Romanello’s hit forced an error by the centerfielder.

Despite the win, it still took three extra frames to get there.

Junior infielder Denise Armendariz doubled to center field in the top of the seventh for UNLV, batting in freshman outfielder Zoe Nolte and Schmidt. The Aztecs were held scoreless at the bottom of the seventh, sending the game into extra innings.

Both teams would fail to record a single hit in the eighth and ninth inning.

The game began with UNLV running rampant, scoring two runs in the first inning and recording more hits than they did in the entirety of game one.

The Aztecs tied the game up in the second inning after sophomore utility player Nicole Seiss’ single sent Theis and Schultz running home.

The Aztecs faced UNLV in the final game of the series at noon on Sunday.

The fifth inning belonged to UNLV, as Federe followed up a first-inning home run with a fly ball out to the center field that sent Schmidt home. Trejo would continue the scoring for UNLV in the sixth with a homer out to the left field.

But not so fast: the Aztecs would then tie the game at 3-3 in the seventh when Langlet and Adams batted home Thies and Siess respectively, sending yet another tie to extra innings.

Unlike the last game, the Aztecs were unable to capitalize in extra innings as a fielding error sent Trejo and senior outfielder Lauren Tycksen of UNLV home in the top of the ninth – resulting in a game three and series win for UNLV.

SDSU travels to Boise, Idaho to take on Boise State in a three-game series beginning with a doubleheader on April 2.