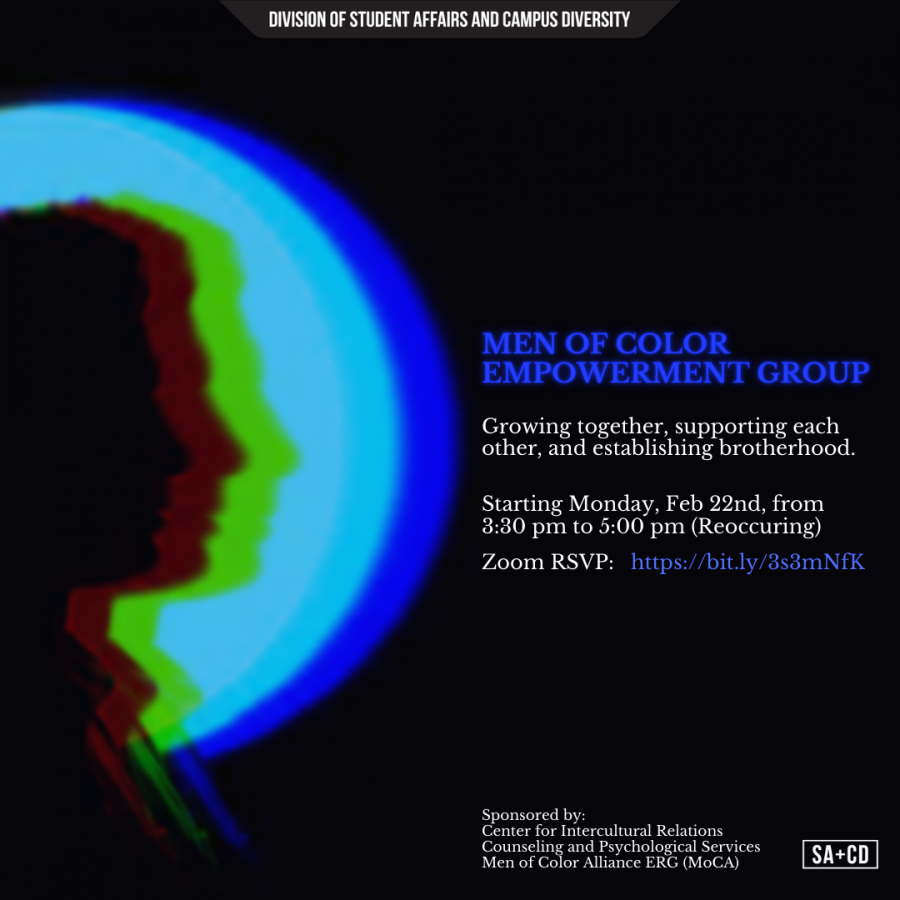 Courtesy of The Men of Color Empowerment Group

A group poster promoting the Men of Color Empowerment Group. They meet virtually every Monday from 3:30 p.m. to 5:30 p.m.

It’s been a year since the pandemic paused our everyday lives – but life is starting to seem to go back to normal.

But this past year has had difficult implications. People have yearned for conversation more than ever, wanting to go outside and socialize with one another.

With COVID-19, however, that has been restricted and most things are done through the comfort of Zoom.

Many groups, businesses and professions have transitioned to Zoom in some shape or form. Though, just because it’s on Zoom doesn’t mean the conversation has stopped.

Will Tran, along with Alex Ayala Reyes (both postsecondary education graduate students at San Diego State) were invited to the Men of Color Alliance Group. After attending the larger staff group Tran and Reyes created something more, the Men of Color Empowerment Group. Tran is a program development consultant and Reyes helps with planning, developing and also consults for the group.

“We (other members in the group) started talking about how this group was filling up space for a lot of us. A space to have conversations, a community amongst people of color especially amongst the times of a pandemic we don´t have an accessible community as much,”  Tran said. “So we were thinking as graduate students we were benefiting so much from this and that conversation brewed.”

The group’s goal is to create a sense of community and ensuring the success and well-being of people of color.

“Even as a psychologist working on college campuses, I’ve been on other college campuses and with men of color support groups and so when I met Alex, and Will – I was like, ‘yes, we need to collaborate’ and I’m so glad we were able to,” Pope said.

Pope mentioned we are socialized in our culture especially among men to not talk about feelings, or react to things. As a man, the norm of expression one is allowed to express is to be angry.

Asking for help, as a man, can be shown as a weakness. With groups such as this, it’s breaking down that social stigma and norm and allowing men to feel and be human without these stereotypical ideas of what it is to “be strong” or a “man.” Students also felt this group could be beneficial.

“I think this space is so important just like Will said men on campus, men students, who identify as men, grad students, are seeing a need for this space when they’re talking to their students for coaching appointments,” SDSU Center of Intercultural Relations Director Paige Hernandez said. “It’s really coming from the community of students that are advocating for this space saying that we want this space and we want to be vulnerable where we can connect with other men on campus.”

Every week, the meeting welcomes students. The meetings are accessible for all students whether one is new or already a member. As of right now, the group averages about 10 students who currently participate in the group’s meetings.

However, the focus isn’t about numbers, but talking about the commonalities of men and color and embodying those vulnerabilities those in the group face.

“Really we want to build brotherhood and community that’s what this group is really about,” Pope said. “So I think if men give it a chance and can show up they can really benefit from this group.”

The group meets every Monday from 3:30 p.m. to 5:00 p.m. More information is located on SDSU’s Student Affairs website.