Lacrosse looks to turn season around against California 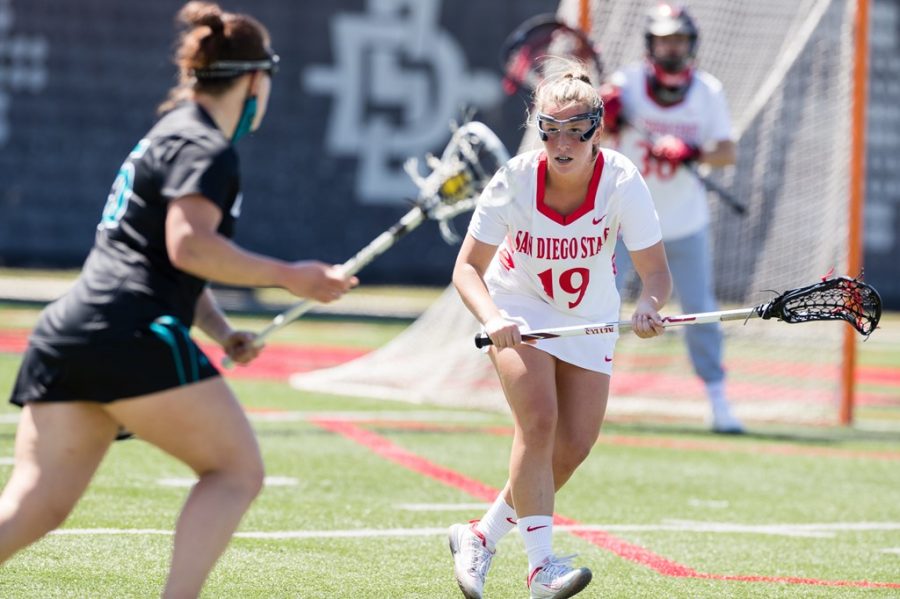 San Diego State lacrosse hopes to end its four-game losing streak this Sunday against the California Golden Bears. In their last four games, the Aztecs (2-6) have been outscored 64-36.

The Scarlet and Black haven’t won since Feb. 28 in their first match against Cal, where they secured a close 12-11 victory.

Head coach Kylee White said the team’s losing streak is attributed to a lack of consistency.

“I think consistency has been our biggest issue,” White said.

White believes that the lack of consistency hasn’t only been seen during practice and competition, but off of the field as well due to strict COVID-19 protocols.

“We’re not having any interaction as a team off the field and that’s always made our team strong,” White said. “It has been our culture. Even the freshmen don’t know some of the things that we’re known for, because we have a fall where we were gritty and were tough, and we fight through everything.”

Due to the lack of off-the-field social interaction, White said the student-athletes can overanalyze and overthink their own game while staying at home.

Despite the losing streak the Aztecs are on, White said she’s seen improvements in her team that will start to get them back to winning.

“Since (the 14-5 loss on March 14 to) Colorado, we have made great strides and are just continuing to build and learn and get better,” White said. “We’ve adjusted some plays, we’ve changed up some defense. Just constantly tweaking (and) continuing to find our strengths because our team is so young. That’s basically how we are, just growing a lot right now.

With the changes White has implemented during practice, she’s hoping the team can be dominant throughout the entire game and get back to the culture of Aztec lacrosse.

“Our focus now is getting better, getting back to what our culture is of competing and focusing on the little things,” White said. “We’ve changed even from the first quarter of this season. We were competing (and) now we’re competing, but we need to compete for 60 minutes.”

On Friday, April 2, SDSU announced that they will allow a limited number of spectators to attend outdoor sporting events, including lacrosse. Unfortunately, the lacrosse field isn’t meant to be a venue but White is curious to see how the team will handle having fans back at home games.

“It’s still gonna be awesome to have people there. 28 is definitely better than zero. I don’t know, sometimes fans are good. Sometimes fans make the athletes play strange because their parents are finally there to get to see them play and they play a little nervous,” White says. “I’ll see how it works. We’ll see how it works. But it’s not gonna be the normal couple (of) hundred that we typically get.”

“I’m really happy that their efforts are being recognized because they are consistent and that’s what I was saying earlier. That (was) one of the things we need,” White said.

The Aztecs look to get back on track starting on Easter Sunday at home against Cal. White said attacking early and limiting fouls will be the team’s focus towards getting their third win of the season.

The opening draw for Sunday, April 4 is scheduled for 12 p.m.

Correction: Part of head coach Kylee White’s first quote was omitted, as it was incorrect. The Daily Aztec regrets this error.