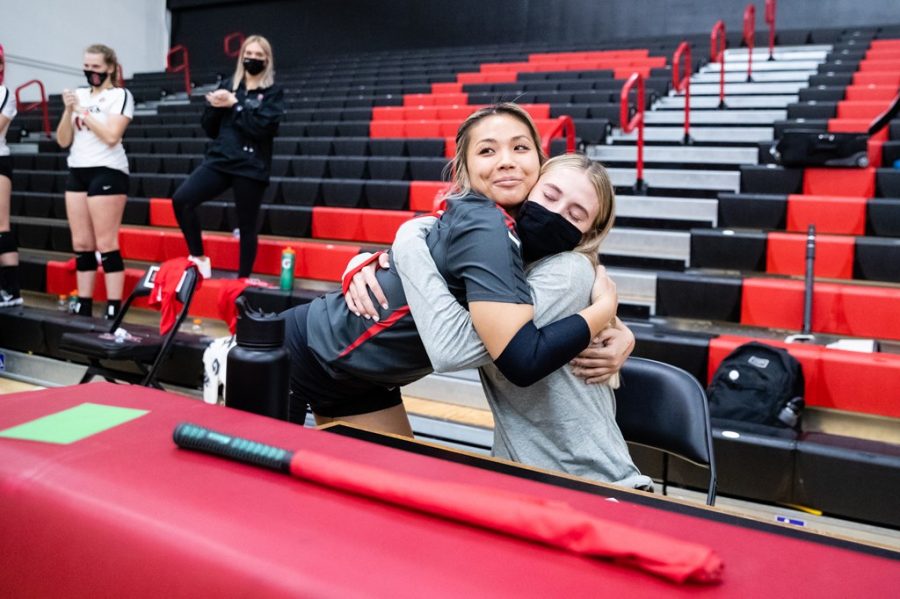 San Diego State volleyball entered Saturday looking to finish the spring 2021 season strong, coming off a canceled match against Air Force that was originally set to take place on April 1.

SDSU not only brought the energy, but it did something it has not done in more than seven years.

In that match seven years ago, Summer Nash led SDSU with 16 kills.

Sixteen kills would also be a team-high on Saturday as junior outside hitter Victoria O’Sullivan recorded that many putaways to go along with six blocks and two service aces.

That is good for 21.0 points on the day for the Albany, Calif. junior.

Not only was it O’Sullivan’s day, but it was also Senior Day as the Aztecs honored outside hitter Erin Gillcrist, libero Lauren Lee, middle blocker Abby Pugh and setter Camryn Machado during pregame festivities.

During the match, Gillcrist was getting it done from all facets on the hardwood as she recorded five kills, six digs and six total blocks, including one solo block.

Gillcrist was named Mountain West Conference Defensive Player of the Week honors on Monday by recording the six blocks.

Lee, who received Defensive Player of the Week honors two weeks ago, recorded a match-high 13 digs for SDSU and Pugh recorded a block in the three-set win.

Machado has been sitting out all year due to a torn ACL suffered back in October.

In the first set, SDSU took the match’s first point on a kill by sophomore outside hitter Nya Blair, who had five kills. From there, the Aztecs never gave up the lead in the opening set as they finished on a 9-3 run.

The Rams tried to get back in the match in the second set as there were eight ties and five lead changes.

After it was all square at 18, the Aztecs closed out the second set on a slide kill by sophomore middle blocker Serena Hodson, which completed a 7-2 run to take a commanding two sets to zero lead.

In the final set, it was much the same as rallies and back-and-forth scoring commenced with six ties and three lead changes.

The Rams saw their final lead of the afternoon at 9-8 in the final set before the Aztecs turned on another motor by scoring four consecutive points. O’Sullivan produced two of her 16 kills during that stretch.

Later on, when it was 16-15 in favor of SDSU, the Aztecs got one of their many side-out opportunities to go in their favor, with a Rams’ service error as the Aztecs finished with a 72.7% side-out percentage for the match.

From there, the Scarlet and Black closed the match on a 9-4 run and finished the season over .500 at home, going 5-4.