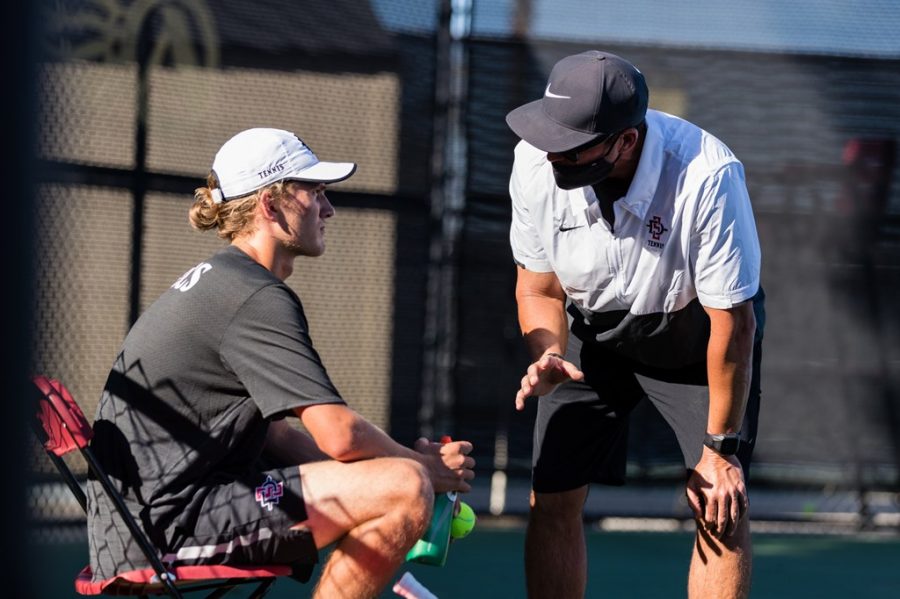 It began in Salt Lake City against Utah on March 30 and was followed with a match in Logan to restart Mountain West Conference play against Utah State on April 1.

However, SDSU was unable to find victory in either of the two matches and has lost five of its last six matches.

The match at Salt Lake City against Utah was a makeup game after a meeting on March 10 was postponed.

All this did was postpone another defeat as the Aztecs fell to the Utes 5-2 at the George S. Eccles Tennis Center.

The Utes tied up the score after senior Ignacio Martinez and freshman Judson Blair fell 6-4 to graduate senior Luis Flores and freshman Franco Capalbo on the second court.

Following the 1-1 tie, everything rode on the outcome of the third court. Emerging victorious was Utah graduate senior Benjamin Heck and freshman Geronimo Busleimen, scoring a 7-6 (7-3) victory over SDSU graduate senior Rafael Gonzales Almazan and senior Aaro Pollanen after a tightly-contested match.

Now down 1-0 after doubles, SDSU looked to gain traction as the teams transitioned to singles play.

Utah had other ideas. Manning the fourth court, Pollanen was dispatched by Bastias 6-2, 6-2 while Rafael Gonzales was dealt a similar loss with a similar 6-2, 6-2 score by Busleimen.

Utah captured the win with a win on the first court. Seeman, who made his debut on the Intercollegiate Tennis Association singles ranking at No. 123, was unable to celebrate with a win as Capalbo took a 6-4, 6-1 victory.

While the game was technically over, the final three contests were allowed to conclude, which was a positive for the Aztecs as they won two out of the three remaining matches.

Just two days after its loss to Utah, SDSU stared down yet another opponent in Utah State.

While the Aztecs won the initial double point, the Aggies stormed back to beat the visitors 4-1. SDSU dropped to 3-9 with the loss and are 0-2 in conference play.

It was a clean sweep in doubles for the Aztecs, as Martinez and Blair started off with a 6-2 win over fifth-year Sergiu Bucur and redshirt freshman Souf El Mesbasi.

Despite carrying momentum into singles, USU took the win out of SDSU’s sails with four straight wins in singles to steal the win.

Gonzales Almazan was dispatched by sophomore Roko Sovin 6-4, 6-2 while Castro soon joined him after losing to El Mesbasi 6-3, 6-2.

While the next two matches were extended to three sets, the Aggies’ stamina outpaced the Aztecs.

Freshman Roni Rikkonen battled back after dropping his first set to Ruiz but ultimately lost by a 6-1, 3-6, 6-4 margin.

The final nail in the coffin was hammered in by Acosta on the third court after he defeated Martinez 4-6, 6-2, 6-0. With the win, the final two matches on courts one and six were suspended.

SDSU’s road trip continues next week as it faces Air Force in Colorado on April 9 before traveling to Albuquerque to square off with New Mexico on April 11.