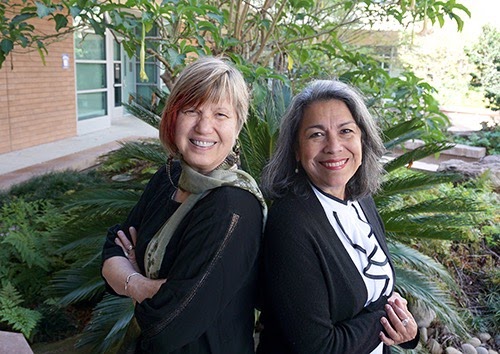 For decades, the San Diego County Women’s Hall of Fame has honored some of the most impactful and important women in the region’s history. Every year, nominees are brought forward to be recognized for their outstanding achievements for the betterment of their community. But the road to creating this online museum was difficult, and San Diego State alumnae Sue Gonda and Olivia Puentes-Reynolds were some of the most crucial figures in its 2001 establishment.

“The two of us were a team in the trenches,” said Gonda, who majored in history at SDSU.

Gonda and Puentes-Reynolds met during a 1999 strategic planning session by the Women’s Reclamation Project. Gonda, who was the board president, invited a plethora of feminist women to hear their ideas on how to create the best museum to honor women in San Diego. When she heard Puentes-Reynolds speak about her ideas, she was moved, and immediately asked her if she’d like to be on her team.

Puentes-Reynolds, who majored in economics with a minor in Chicano/a studies at SDSU, was motivated to team up with Gonda due to her observations of a lack of female and ethnic representation in board meetings across San Diego County before 2000.

“In the old days, in the 90s, all I heard is that ‘women won’t work together, they just want to scratch out each other’s eyes,’” Puentes-Reynolds said. “It was competitive. It wasn’t about collaboration or helping one another, or providing some role models for younger women that they can be anything they want to.”

Both women had experienced sexism while earning their degrees and beyond. Gonda, for example, recalls how the Women’s Resource Center at SDSU used to be nothing more than a student club, with no school funding and no paid staff. It was completely volunteer-driven. She also remembers protesting The Daily Aztec in the 80s when they at one point stopped running ads for Planned Parenthood and began running more pro-life ads.

Gonda eventually began brainstorming a women’s hall of fame when she noticed there was plenty of men’s sports halls of fame, and many ways for men to be spotlighted, while women’s accomplishments were often ignored. She was inspired by the National Women’s Hall of Fame in New York but wanted San Diego’s to take a different approach.

After a lot of planning, Gonda, Puentes-Reynolds and their small team founded the Hall of Fame in 2001 and inducted its first honorees by 2002.

Both women credit their background at SDSU in helping them succeed with such a massive undertaking and have advice for young women hoping to make an impact in the world.

“Whatever interests you, do it,” Gonda said. “Start by volunteering, start by finding an organization that does what you’re interested in…Just get involved, start off small. Go show up somewhere and say ‘I want to help.’ You’d be surprised how quickly you can get hooked into a career and follow what you love because it’s something that you care about.”

“Don’t limit yourself, don’t listen to the naysayers,” Puentes-Reynolds said. “If you like space and you want to be an astronaut, maybe you won’t be an astronaut in your final job, but you might be one that helps put an astronaut in space. In other words, don’t be afraid that you’re not smart enough. Give yourself permission, give yourself a hug, and find somebody that wants to collaborate with you and not compete with you.”

Gonda said she is especially proud thinking back on what she, Puentes-Reynolds, and the other women they worked with were able to accomplish.

“If you’re doing something you care about, make sure it lives on, make sure it’s not about you, make sure it’s about the work you’re doing,” Gonda said. “You know, sure I was president of the museum, I was president of faculty at Grossmont – blah blah blah who cares? The point is that the work that I did was so important to me that I didn’t want it to die. So Olivia and I started the Hall of Fame, but it lived on after we stopped working with it, it’s still going. And that’s the important thing, to make other people interested in what you’re also passionate about…If we’re not mentoring young women, how are young women going to become leaders?”

Gonda and Puentes-Reynolds said they hope the Hall of Fame can find a permanent physical location in the future but are also looking forward to seeing its online infrastructure be built up even more.