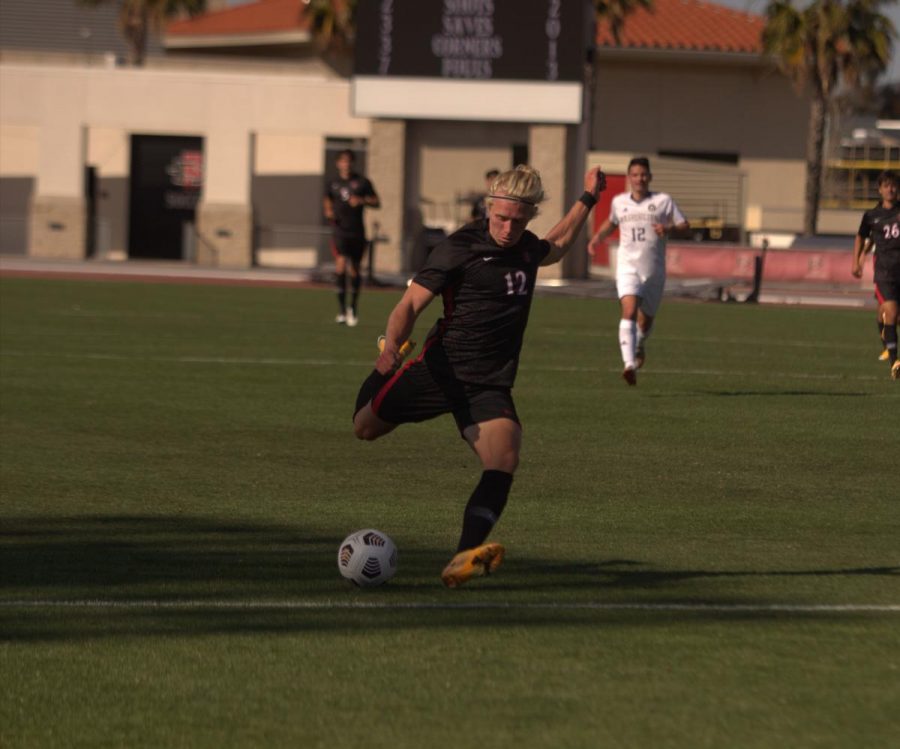 San Diego State men's soccer sophomore forward Austin Wehner scores inside the box to give San Diego State a 2-0 lead in the 36th minute. The Aztecs defeated then-No. 4 Washington 2-0 on March 28, 2021 at the SDSU Sports Deck.

The Cardinal (6-1-1) have defeated the Aztecs (1-5-2) twice this season. The last time both teams faced each other, the Aztecs fought to force the game into overtime. Saturday’s match was brought to an end in regulation.

All of the goal action took place during the first half of the match. Stanford was the first to change the scoreboard in the 23rd minute when sophomore forward Gabe Segal managed to capitalize a chance off a free-kick set piece from the right side of the pitch.

SDSU equalized in the 32nd minute when freshman midfielder Andre Ochoa took advantage of a Cardinal’s defensive miscue to create a one-on-one opportunity with the keeper. Ochoa finished the play with a finesse shot to the lower-left corner of the net to make it 1-1.

A highlight of the game came just one minute later when SDSU sophomore goalkeeper Tetsuya Kadono was able to save a penalty kick to keep the game tied. Despite the save, Stanford would put away two more goals before going into the halftime break.

The Cardinal scored again in the 36th minute when junior forward Zach Ryan’s right foot volleyed a bouncing ball in the Aztecs’ box to make it 2-1.

The last goal of the match came in the 44th minute by Stanford senior forward Charlie Wehan off a right pitch play where the Aztecs’ defense missed a tackle. He took advantage with a right-footed shot that went past Kadono and inside the far post to make it 3-1.

Despite the first-half struggles, Kadono and the Aztecs’ defense was able to keep a clean sheet in the second half by not allowing any more goals from the Cardinal.

Stanford outshot the Aztecs 18-6 and had eight corner kicks against the Aztecs’ three. According to the NCAA, the Aztecs lead in fouls in the Pac-12 Conference with an average of 15 fouls per game. However, Stanford was heavier on the fouls in this game with 20-11 repulsive actions.

This was the second time SDSU lost by more than one goal this season.

The Scarlet and Black have one last chance to go up in the Pac-12 standings as they return to the Bay Area next weekend to face California on Saturday, April 10 at 7 p.m. in Berkeley.