Three takeaways: Looking back at the 2020-21 women’s basketball season 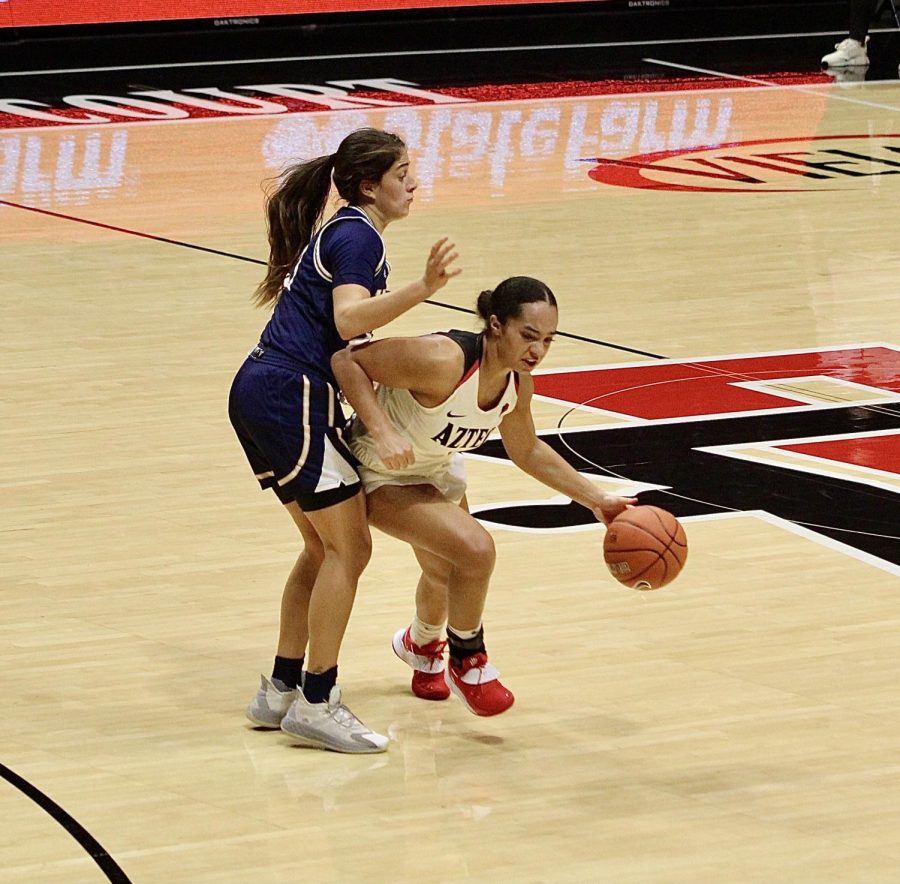 San Diego State women's basketball senior guard Téa Adams looks to get past a UC Irvine defender during the Aztecs' 66-55 loss to the Anteaters on Dec. 19, 2020 at Viejas Arena.

by Breven Honda and Reese Savoie

The 2020-21 San Diego State women’s basketball season concluded in the first round of the Mountain West Conference Tournament on March 7 in Las Vegas.

Head coach Stacie Terry-Hutson said she was ultimately delighted for the players despite all the obstacles the team faced, including the coronavirus pandemic.

“This year’s been extremely challenging with COVID and our team has been hit pretty tough throughout the season, but I am really proud of our student-athletes how they’ve been able to put themselves in a position to play and compete at a high level,” Terry-Hutson said.

Here are three takeaways from the past season.

1. So much change happened

One week after the 2019-20 season ended for the Aztecs, the world changed in an instant when the COVID-19 pandemic struck the United States. That affected the entire team on their preparations for the 2020-21 season.

Gyms were closed and the players had to find other ways to get ready.

Once the season began, it was a challenge when the team brought in eight new players to the roster from a season ago, while only having one senior.

In addition, the program welcomed Marsha Frese, who has more than 20 years of coaching college basketball, into the program to serve as an assistant coach.

Junior guard Sophia Ramos said Frese helped the team out, not only by improving their rebounding scheme, but also trying to get the guards easy baskets.

“I think coach Frese was exactly what we needed,” Ramos said. “She liked to nail it down on the rebounding, nail it down on trying to push. She was even helping us more on the point guard side for me, just little tidbits to move faster, that gets more transition (opportunities). She knows the game really well. I’m so happy we have her on our staff. She really knows what she’s talking about.”

Midway through the season when the year changed from 2020 to 2021, sophomore forward Mallory Adams returned to the floor after recovering from knee and shoulder surgeries. Her rehab lasted nearly 14 months.

The Frisco, Texas native was on the court for the first time in over a year when SDSU was in Reno to take on Nevada in January.

Ramos said Adams was slowly getting back to her 2018-19 self, when both of them received MWC All-Freshman team honors.

“I think she started to hit her groove at the right time, which is fantastic for us,” Ramos said. “I loved seeing her being able to start to slowly show us who Mal was her freshman year and showing that she was capable of so much more. I can’t wait to see what it looks like when we get to come back together.”

Not only did we see new players put on an Aztec uniform and Mallory Adams return to the floor this season, but Terry-Hutson also implemented a 2-3 zone defense into their strategy.

Led by assistant coaches Nick Grant and Frese, Ramos said the timing was right to add some zone defense.

“I think it was the perfect time to switch it up,” Ramos said. “As we endured some of the injuries, it helped us save some of the legs of our players because we have to have people play more minutes. I think it also threw people off, which is great because I feel like they just know us as a man defensive team, so you have to go into scouting a bit differently because it’s not who we are anymore, or at this past year.”

2. Guard depth proved to be pivotal

Heading into the season, if there was one thing that was not stressed enough, it was the team’s depth at the guard position.

Led by Ramos and senior guard Téa Adams, they led an offense in which there were six players behind them on the depth chart.

Two of those guards were junior transfers Mercedes Staples and Alex Crain.

Ramos said having a third guard such as Staples, who averaged 11.5 points and led the team with 6.4 rebounds, did not make it seem like a backup guard was the right term.

“I feel like it’s not necessarily a back up since so many guards can play at once,” Ramos said. “I think a lot of people didn’t understand how good Mercedes was or is. She came out of her shell and did a lot of great stuff for us, which is fantastic to see.”

Crain was able to come into games and be a defensive presence — even on the team’s best scorer.

Ramos said Crain’s ability to guard was critical to the team as she continued to adjust in her first year wearing Scarlet and Black.

“She showed that she can defend,” Ramos said. “She’s starting to be more vocal. I feel like we’re seeing her grow more as a player, but she really did show us she can defend and we can count on her in some of those situations, especially against the best player.”

Things turned for the worst in mid-December when Ramos went down with a hand injury in SDSU’s second MWC game.

She was sidelined for 10 weeks and did not know if she would return to the court this season.

“When I got hurt and saw the first doctor, I kind of accepted that my season was done,” Ramos said. “Part of that was because even if there was a slight bit of hope and I wasn’t able to do it, I would’ve been more upset.”

As the rehab process went along and she was meeting her goals to return, she thanked Associate athletic trainer Queenie Soriano and Grant for getting her back to the floor.

“You can’t ever get fully back into it, but a lot of my props goes to Queenie and Nick,” Ramos said. “Nick did everything he could at the beginning to develop my left hand when I could start doing stuff with the ball again, and then he started helping me get me back into the shooting with my right hand.

History was on the line when Ramos got hurt. She was 11 points away from becoming the 22nd player in program history to reach 1,000 career points.

She achieved that in her first game back to the floor on Feb. 15 against UNLV at home.

While Ramos was on the bench, that meant players had to step up and it was the perfect opportunity for Téa Adams to seize that role as the team’s only senior.

Terry-Hutson said Téa Adams’ biggest improvement from 2019-20 was her vision as she averaged 3.4 assists, more than the 2.3 assists she had a season ago.

“What I was most impressed with Téa this season was her passing,” Terry-Hutson said. “With Sophia being out for the majority of this season, she had to step up in those roles and she had a great year. She really stepped up, not only shooting the ball, but her assists were higher than it’s ever been. She was my stat-stuffer this year and with her being healthy the whole year, she really put us on her back and helped us get better every day.”

One of the best moments of the season came from the hands of Téa Adams.

With the game on the line on Senior Day weekend, the 5-foot-9 senior had the ball in her hands with 10 seconds left.

She used her signature move — a drive to the basket — to beat the defender and lay the ball in with five seconds left to give the Aztecs a 79-77 victory over Fresno State.

Freshman guard Kim Villalobos is just the third Aztec on the current roster to be named to the All-MW Freshman Team.

Throughout the 2020-21 season, Villalobos averaged 7.4 points and 4.5 rebounds in conference play.

She also led her team in offensive rebounding, averaging 2.1 boards per game.

Ramos expressed her excitement for Villalobos, and acknowledged that this accolade was well-deserved.

“(Villalobos) had to come in and play a big role for us. The crazy part is, she’s so young and there’s so much more to her game that’s coming and I can’t for everyone to see that. I can’t wait to be a part of it,” Ramos said.

The 6-foot freshman from Van Nuys, Calif. said the recognition was a pleasant surprise, and attributed her success on the court to her teammates.

“I was surprised because I felt like I can play much better basketball and I still was mentioned in the All-Freshman team,” she said. “I was definitely thankful. Shoutout to my teammates.”

Villalobos’ early success will carry on into next season, as she and nearly the entire team will return to the Mesa.

However, the Aztecs will miss a key member of their program: Téa Adams.

“I appreciate Téa on so many levels because she’s helped our program other than just her athletic ability. She believed in us long ago when we had this vision of what we could be and still  trying to achieve,” head coach Stacie Terry-Hutson said. “She came in with a great recruiting class and stuck it out with me, and she has affected our program in so many ways with her advocacy, her recruiting, her personality. She’s a good kid and a great representation of our Aztec culture,” she added.

“I only played with Téa for a year, but regardless, she brought good energy to the team. I think all of us looked at her as a great leader, a great basketball player — I think we all can see that — and a good person,” Villalobos said.

Ramos said despite the loss of only one teammate as opposed to many, things are still going to look a bit different for the squad.

Alongside Téa’s influence both on and off the court, freshman guard Asia Avinger will be returning after missing the 2020-21 season due to a leg injury.

“It’ll be good for us because everyone’s coming back, but it’s also going to be very different for us,” Ramos said of next season. “Téa (Adams) has been a vital part of our team my three years here, and I’m sure for her four years here. On top of that, we’re going to have to get used to playing with Asia again as she gets back and then whoever else we bring in.

“It’s just going to be very different, so I don’t even know right away we hit a consistency point just because you never know what kind of year you’re going to get.”

In a year as unprecedented as 2020-21 was, the Aztecs learned to expect the unexpected, to not take anything for granted and be the best versions of themselves as they take to the court.

To put it simply: they have grown.

Ramos will head into her senior year, where she hopes to continue this development, especially when it comes to her leadership.

“For me, I’d like to see myself grow more vocally. I’ve done good leading by example, but I think a big part of where I need to grow more is using my voice,” Ramos said. “It’s going to be a lot of little things, working on getting back into that shape I was in before I got hurt and really using my voice, being that person now that I am going into my last year.”