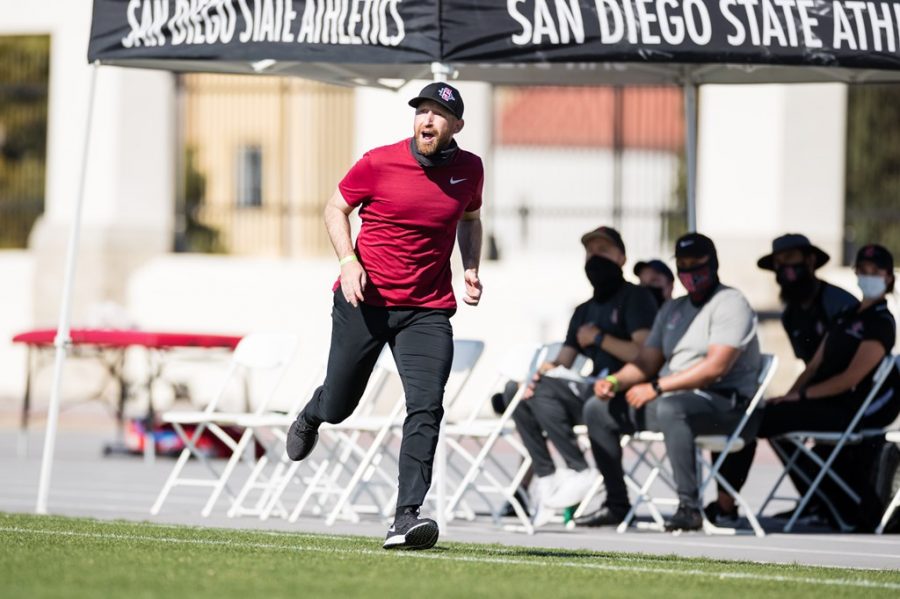 San Diego State men's soccer head coach Ryan Hopkins runs down the touchline shouting instructions at his players during the Aztecs' 2-0 upset over No. 4 Washington on March 28, 2021 at the SDSU Sports Deck.

Hopkins began implementing conversations on diversity, inclusion and social justice with his team in the fall semester after the events that took place following the death of George Floyd.

The Clive Charles Diversity Hiring Initiative is another way that Hopkins strives to make soccer inclusive for all people.

“I am relentlessly optimistic about the impact the Clive Charles Initiative will have on adding diversity to college soccer and also at the highest levels of the game, including MLS and U.S. Soccer,” Hopkins said in a press release. “Ultimately, what is most exciting is that the legacy of the initiative will be authored by those talented people, who receive the right support at the right time through the (Clive Charles Initiative).”

The Clive Charles Initiative is an opt-in pledge by Division I men’s soccer programs to include a Black group of candidates in the pool for coaching vacancies. The initiative reflects a commitment to ensure equal opportunity in the hiring of coaches and to address the barriers that have challenged underrepresented minority groups.

Under this new initiative, Hopkins pledges to implement four main principles when looking to fill a coaching vacancy.

The first principle is programs will use best practice recommendations and interview at least one black candidate from the “Ready List,” or a diverse candidate that is not currently employed by the program.

The second principle is that formal interview requests will be officially sent from the coach in writing to candidates. The Clive Charles Initiative will maintain interview records and reports.

The final principle states The Soccer Collective on Racial Equality (SCORE) will prepare, maintain and update the “Ready List” of top candidates. It will distribute the list to coaches and administrators beginning May 1.

So far, 11 Division 1 men’s soccer college programs have partnered with SCORE on this initiative.

The Soccer Collective on Racial Equality (SCORE) announced the creation of the initiative on April 7 with the goal of creating pathways of entrance, advancement and representation for emerging and current Black soccer coaches. The initiative is also supported by the United Soccer League Black Players Alliance (USLBPA).

The initiative is named in honor of Clive Charles, who was the University of Portland (1986-2003) and U.S. National Team coach (1993-2003). After retiring from his professional career in Europe and with the Portland Timbers, Charles moved to Oregon and became the University of Portland’s men’s soccer head coach in 1986. He was also the women’s National Team head coach starting in 1989.

Charles passed away in 2003 after losing his battle with cancer.

The Aztecs, along with 10 other college programs, look to continue to make college soccer a place that provides opportunity for all people no matter their race or ethnicity.