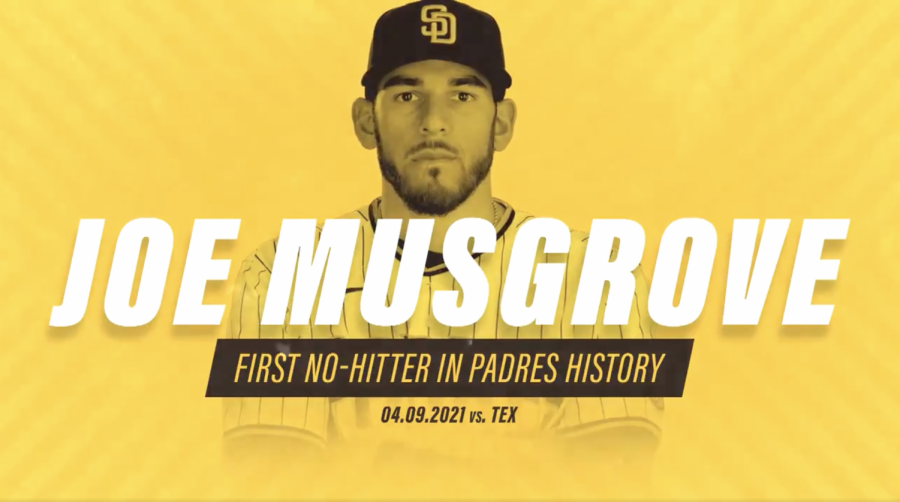 Former San Diego State commit and current San Diego Padres pitcher Joe Musgrove took the mound at Globe Life Field in Arlington, Texas on April 9, 2021 and did not step off of it for nine innings after throwing the first no-hitter in franchise history.

Prior to Friday night’s contest, the Friars were the only remaining team without a no-hitter.

That streak is no longer.

The only Texas Ranger to reach base was hit by a pitch. The remainder of Musgrove’s 112 tosses (and 10 strikeouts) that historic night kept the opposition at bay.

The El Cajon product can be thanked for the latter moniker.

“Just a San Diego kid that made it to the big leagues,” Musgrove said in a postgame interview. “It feels even better to be able to do it in a Padres uniform and selfishly be able to do it for my city, and have everyone know that the kid from Grossmont High threw the first no-hitter.”

Years before making Padres history, that kid from Grossmont High was originally meant to be an Aztec.

Musgrove was one of eight San Diego natives among a 21-man recruiting class to sign a National Letter of Intent to play baseball at SDSU beginning in 2012.

Musgrove never ended up donning the Scarlet and Black, opting instead for blue and white after having been drafted by the Toronto Blue Jays as the 46th overall pick in the 2011 MLB Draft.

Two years later, Musgrove headed to the Houston Astros, where he made his major league debut in 2016 and was later crowned a World Series champion.

He went to the Pittsburgh Pirates in 2018 before being picked up by Padres’ general manager A.J. Preller this offseason to play for the team he grew up cheering for.

“It feels really good to be in a Padres uniform when I did it,” Musgrove said of his performance. “That was my first-no hitter I’ve ever thrown in my life, so pretty crazy that it comes on a big league stage and that I’m in a Padres uniform.”