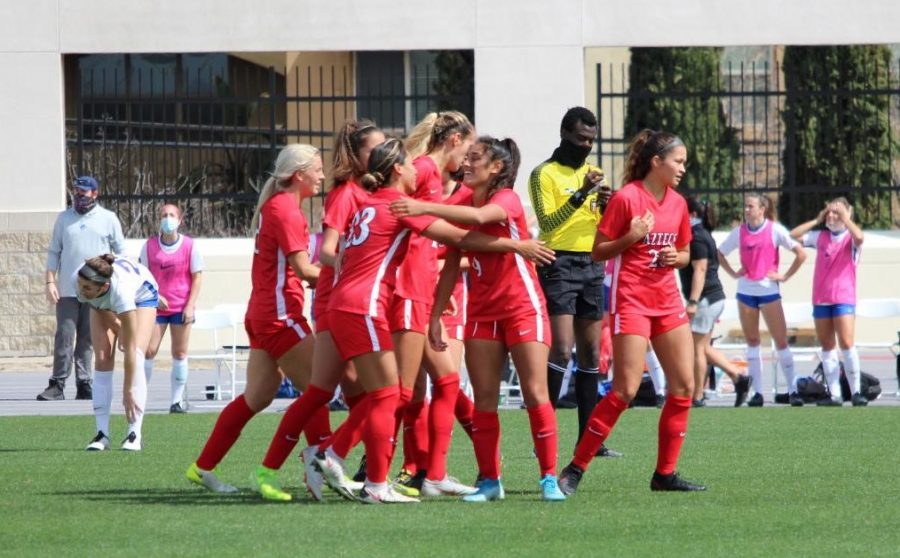 The San Diego State women's soccer team celebrates after a goal during the Aztecs' 3-1 win over Boise State on March 7, 2021 at the SDSU Sports Deck.

by Devin Whatley and Kyle Betz

After coming off of a loss to UNLV in Las Vegas on April 3, San Diego State women’s soccer had two road games left to close out the regular season.

The Aztecs (8-2) first faced preseason conference co-favorite Boise State before traveling to Nevada to take on the Wolf Pack.

In a rematch of a 2-0 victory from earlier in the season, SDSU faced the Broncos for the second time this season on April 9.

A lot was on the line at the Boas Soccer Complex for the Aztecs. Win the game, and they could eliminate BSU and Fresno State from clinching the Mountain West’s West Division. Also, a victory would get them three points to separate themselves in the first place spot.

The game was very similar to the first matchup on March 7.

Boise State’s game plan was to be physical with the ball and deny opponents from converting on attacking opportunities. For the first half of the game, it was working.

The Aztecs were able to get chances on offense, but BSU was able to prevent them from capitalizing. The most notable one was in the 25th minute when SDSU had a free kick opportunity that hit off the top of the crossbar.

Despite having 11 shots on offense and four corner kick opportunities to the Broncos’ zero, SDSU and BSU were both scoreless at halftime.

The offense was able to finally break through for the Aztecs in the second half thanks to senior midfielder Chloe Frisch.

SDSU’s leading goal-scorer stepped up once again when the team needed her most. In the 50th minute, Frisch dribbled the ball in the midfield, attacking BSU freshman defender Jocelyn Stephens.

As she got to the penalty arc, Frisch lasered a shot with her left foot which sailed over the goalkeeper’s outstretched arms into the far side of the net for a goal, giving the Aztecs a 1-0 lead.

For the next 40 minutes, SDSU was able to control possession away from the Broncos, and close down on last-minute scoring opportunities.

On the defensive side of the ball, SDSU was able to clamp down on the BSU offense. The Broncos were held to just five shots on offense for the game and only had one corner kick opportunity.

In all, the Aztecs had a 16-5 advantage over BSU in shots. Frisch also finished with four shots on the afternoon, with a pair of others (junior forward Anna Toohey, junior defender Lauren Dicus) finishing with three shots.

The 1-0 victory by the Aztecs moved them to 7-2 on the regular season and eliminated BSU and Fresno State from winning the West Division.

A few hours later, the Aztecs didn’t have to worry about winning the final game to clinch the division.

UNLV, which sat at second place in the conference standings with a 6-2 record, lost to Nevada on April 9. Because of the result, SDSU was able to claim the top spot in the West Division, securing its chance at winning a bid to the NCAA Tournament.

On April 11, the Aztecs headed to Reno to close out the season by playing Nevada.

These two teams last played each other at SDSU’s season opener on March 5. That game was a tight-knit affair for the Aztecs, with a last-minute goal by sophomore defender Claire Watkins putting them on top.

This time around, it was an offensive showcase for the Scarlet and Black.

In the 36th minute of the first half, Toohey was able to fire a shot inside the penalty area. The ball then found senior forward Veronica Avalos, who banged it through the net for a goal, giving SDSU a 1-0 lead in the first half.

Avalos wasn’t done, however. Seven minutes later, the San Diego native would knock in a shot from just outside the penalty arc for her second goal of the game. Her goal cemented a 2-0 lead for the Aztecs in the 43rd minute.

At halftime, SDSU overwhelmed the Wolf Pack offensively, holding an 8-1 advantage over Nevada in shots.

In the second half, Nevada responded, as sophomore midfielder Lizzy Hairston kicked in the team’s only goal of the game. The Wolf Pack also held SDSU scoreless for about 43 minutes, but that would not last for long.

The Aztecs earned themselves a penalty kick, and Friesen selected Avalos to attempt the shot.

From there, Avalos calmly ran in and banged the ball into the back of the net for her third goal of the game and her first hat trick this season.

Avalos had four shots in total, with three of them converting to goals for SDSU. Shots were also aplenty for other players too. Toohey had four shots and three players (Frisch, Dicus and freshman forward Emma Gaines-Ramos) finished with two shots each.

Defensively, the Scarlet and Black locked up the Wolf Pack’s attack. In the first match, Nevada had two goals from senior midfielder and leading scorer Hannah Souza. This time around she had zero goals and shot attempts on the game.

One of the reasons for SDSU’s strong defensive performance? Senior defender Sarah Broacha. She played 75 minutes, and while she was out on the field, no player from the Wolf Pack front line or midfield scored.

Broacha’s defensive effort was not only recognized in the stats, but also by the Mountain West. The Pleasanton, Calif. native earned conference Defensive Player of the Week honors for the first time this season on April 12.

Her honors were also met with celebratory messages from fellow teammates.

Now, the Aztecs look forward to the Mountain West Conference final against New Mexico — champions of the Mountain Division.

The game was originally dubbed the “Mountain West cross-divisional match” instead of a championship, sending social media into a frenzy last Saturday.

Per the conference, athletic directors and senior woman administrators initially decided the game would be called a cross-divisional match.

Despite the controversy, the Mountain West reversed the decision on April 12, calling the match the “Mountain West Conference Final.” The winner of the game will be the conference champion and receive an automatic bid to the NCAA Tournament.

The conference also clarified on Instagram that the winning team will “be named the Mountain West Regular-Season Champion and will receive the championship hats, t-shirts and trophy that all MW Championship teams receive.”