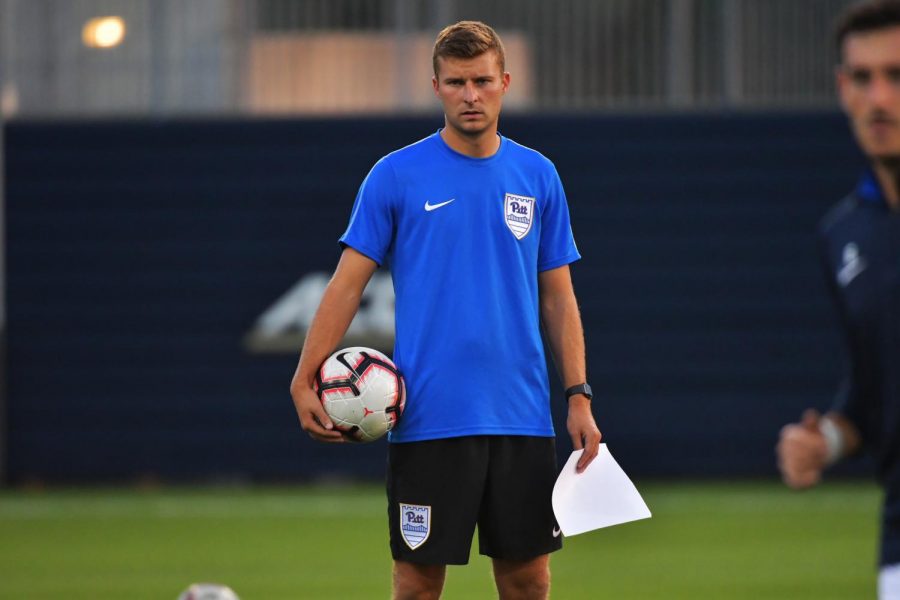 Courtesy of the University of Pittsburgh/SDSU Athletics

Bryce Cregan was an assistant coach on the University of Pittsburgh staff since 2018.

Cregan joins the Aztecs from the University of Pittsburgh, a team that currently ranks No. 1 in the nation. He has been on staff with the Panthers for three years as a volunteer assistant coach.

“We are thrilled to welcome Bryce to the Aztec family,” head coach Ryan Hopkins said in a press release. “He comes highly recommended from some of the top minds in college soccer and I look forward to him joining our athletic department.”

Cregan will join the Aztecs on the sidelines this upcoming Saturday for their match against Oregon State.

“I am excited for the opportunity to work with coach Hopkins and Aguilar to help develop our student-athletes into winning people and soccer players,” Cregan said in the press release. “I am honored to have the opportunity to coach in the Pac-12 and I can’t wait to share my experiences as a player and a coach to help the Aztecs become the best versions of themselves.”

Cregan, a native of Dallastown, Pa., was the No. 2 rated prospect in the state of Pennsylvania after competing on the U.S. U-17 National Team and being named an NSCAA All-American.

Cregan began his college soccer journey as a defender at The University of Akron (2014-15) where he appeared in 19 games. He was a part of the defense that posted 15 shutouts during his two seasons and also advanced to the NCAA College Cup Final Four his sophomore year.

He finished off his collegiate career at the University of Pittsburgh (2016-17), where he started in 32 matches and was named a team captain. During his time with the Panthers, the team earned its first ACC wins since joining the conference in 2013 which included three ranked opponents.

Cregan returned to join the Panthers’ staff after his two years as a student-athlete. During his first season on staff in 2018, Cregan helped the Panthers upset No. 7 Virginia in the ACC Tournament. This victory marked the team’s first ACC Tournament win in program history.

During his second season on staff with the Panthers (2019), Cregan helped guide the team to one of the best seasons in program history. With a 10-8-2 record, Pitt earned its first at-large bid to the NCAA Tournament which was the school’s first appearance since 1965. The Panthers advanced to the ACC Tournament semifinals for the first time, and also earned a win over No. 1 Virginia during the regular season.

“Bryce’s playing and coaching journey at Pittsburgh mirrors what we are trying to do here at San Diego State,” Hopkins said in the press release. “His experiences will be invaluable as we push the program to places it has never been before. As a former U-17 U.S. National Team defender himself and Final Four participant, he understands the rigors of the student-athlete experience and will be a great role model.”

This season, Pitt went 7-1-0 during the fall portion of the 2021-21 season. They are currently 13-2-0 and 9-1-0 in the competitive ACC. The Panthers lead the nation in goals scored and rank fifth in goal differential.

As Cregan looks ahead to beginning his journey on the Mesa, he also reflects on all of his experiences that made him into the person he is today.

“I want to thank the search committee for their support and giving me this opportunity,” Cregan said in the press release. “I also want to thank my family and everyone who has shown their support for me throughout my coaching journey including Jay Vidovich, Michael Behonick and Rich Costanzo at the University of Pittsburgh for believing in me as a player and a coach. I wouldn’t be where I am today without their guidance.”